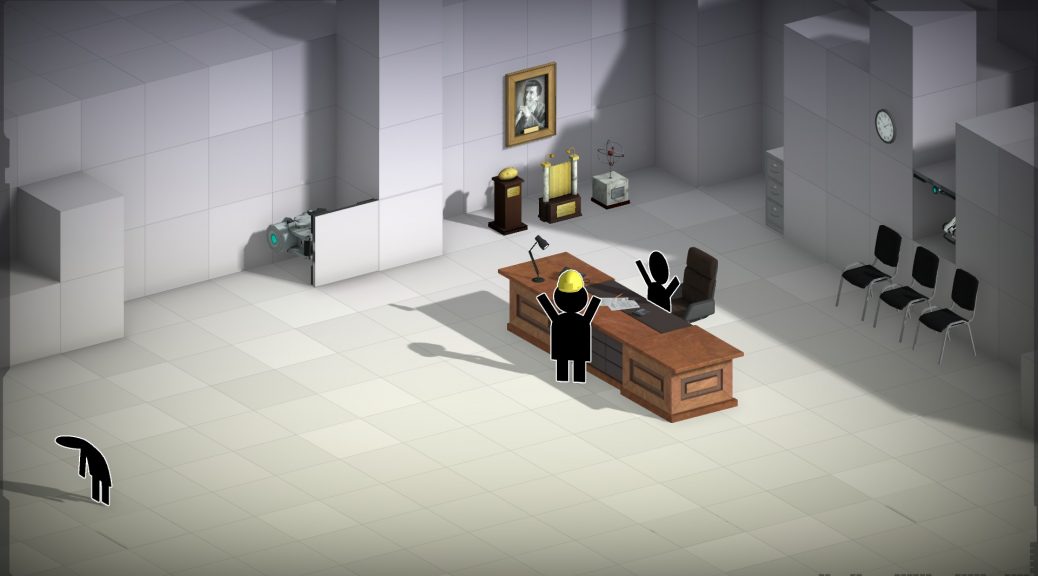 You may have read that I was a little bit excited to get my hands on this game. It had bridge building (a style of games i’m actually quite fond of) and Valve’s Portals mixed with a dashing of Sardonic wit from GLaDOS herself. What was not to like.

Well jump to the cut to find out….

I’m going to have to be honest here (and given this is a review you’re kind of expecting that already, so we’ll quickly gloss-over that) and say that the game did not immediately grab me. The title screen and intro (such that it is) was incredibly charming and funny and everything about it looked great and exactly what i’d expect from such a title, it just fell flat afterwards. In the game you’re tasked with being Aperture laboratories new construction engineer. In doing so you are greeted with a number of levels which are introduced by GLaDOS herself, who outlines the goals with the expected dry humour. As you’ve probably surmised, you’re having to build bridges or routes between entry and exit points to allow your little people to drive their way free of each test chamber. There are different hazards (such as acid slime) and increasing levels of complexity that mounts further once portals are added to the mix. It can get pretty complicated, and I guess that’s the point. Unfortunately, for me at least, I never actually found it that enjoyable to do. The controls are simple- I was playing on PC but I can imagine them transferring easily enough across to a tablet or screen. You are free to drag and drop support beams (that can be turned into roads by another tap), adding support cables or structures as needed. It’s a simple and relatively elegant interface, but it does end up feeling slightly restricted. This feeling becomes even more apparent with the portals. As they’re fixed points you never actually get to place them yourself which means you never quite feel like you’ve come up with a brilliant solution on your own, more, that you found the one you were supposed to find.

There’s also a curious quirk (at least on the PC copy I was reviewing) where you can only send one of your carts across to try the track at a time- meaning you end up finishing the level (and getting a performance reward) before you can actually go back and complete the level with all your carts. The button to release your cart convoy literally doesn’t exist until you’ve done this; think playing lemmings with one lemming, then going back to do the level with them all and you’ll get the idea. I think I can see the reasoning behind the decision, but in a game like this half the fun is seeing the carnage when it all goes wrong, limiting your ability to see that carnage until you know it’ll work, is odd. Its more of a shame as the carnage is actually pretty good. Carts can collide with each other (and with the use of Portals, multi-crossed paths are common) and the little people can even be knocked off their carts if the roof is too close or another obstacle hits them. The animations and general graphical presentation too is overwhelmingly charming which helps take away from the lack of fun you’ll probably be having. That, pretty much, is the game. This was one of those titles where I thought i’d enjoy it a lot more than I did. Unfortunately there was nothing really here that made me want to play for any extended periods of time; even the addition of GLaDOS wasn’t enough to keep me interested, and given the superior competition out there in this genre, it makes it very hard to recommend this game. Which is such a shame.

Review code supplied by PR. For more on our review policy, please head to our ‘About‘ section.