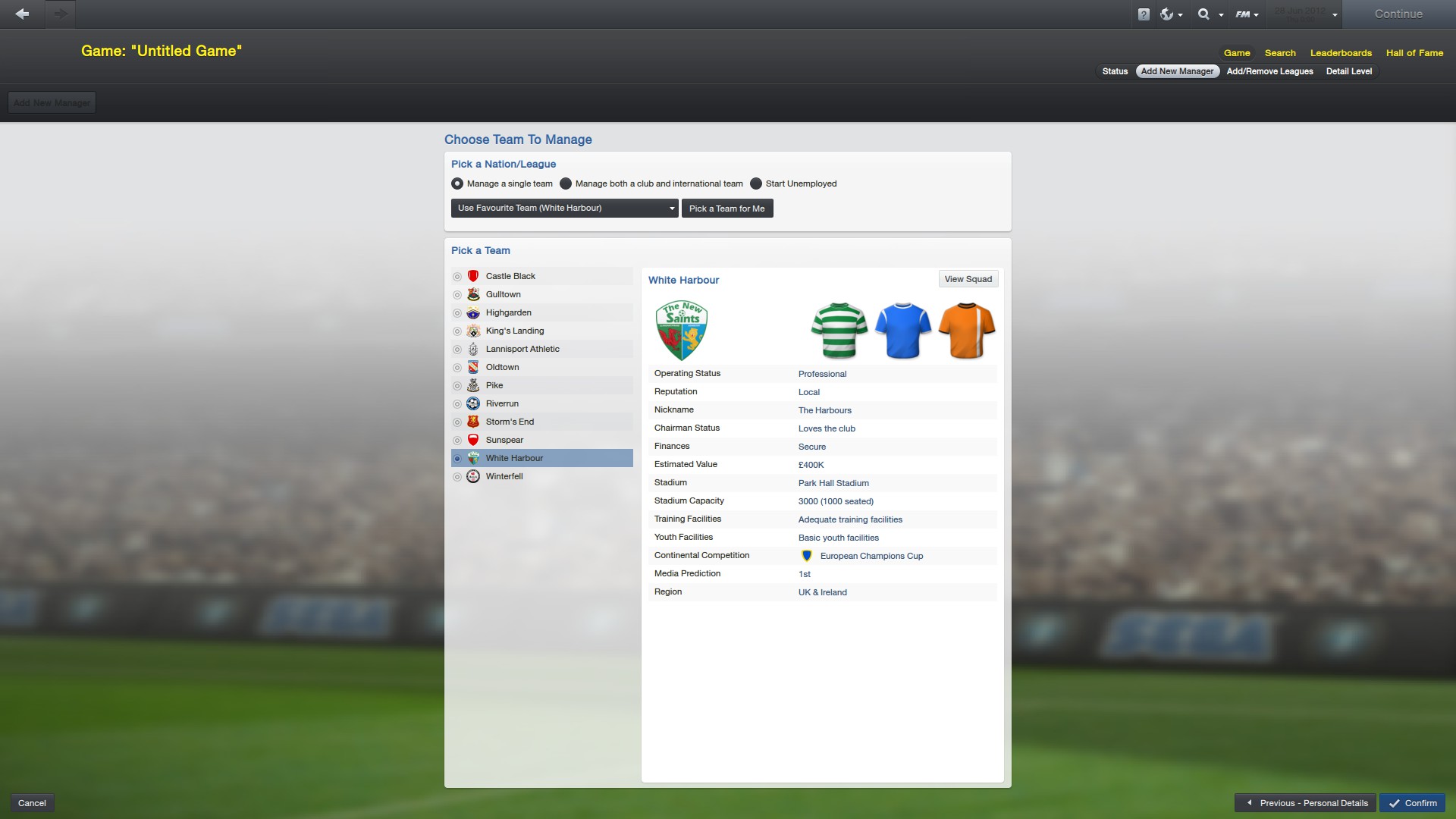 This is the second part of my journey into making a Game of Thrones based custom database for Football Manager 2013 (part one is here). It might be a bit of a monster job trying to re-create just a small portion of George R. R. Martin’s world within the game, but it is a challenge I am determined to meet, despite being a bit of a novice when it comes to using the Football Manager editor. In this part of my journey, I make some big progress with the league structure in Westeros, the land that used to known as Wales.

I knew that it wasn’t enough to just have on division in Westeros, there needed to be something of a pyramid structure so that there is a way for a small lowly club from The North to climb to the top of the Westerosian Premiership and ultimately European glory. Ignore the fact that I will have Westerosian teams taking part in European competitions, the teams will need to be able to prove themselves in competition against some of the very best.

I encountered some early troubles though when trying to re-configure the league systems, all down to my lack of experience with the Editor. The following two screenshots show some of the screens within the original Welsh league structure.

As you can see, there are a two other divisions in the Welsh pyramid, though in-game only the Premiership appears as a playable league. The other two contain sub-divisions, and aren’t really divisions at all. The second screenshot shows just a few of the numerous Welsh leagues that sit in the database.

After changing the Welsh Premier into its Westeros based relative, I had gone ahead and renamed a few other random Welsh leagues into Division 1 through to the Conference. My initial attempts to change the default Nation Rules were a complete failure, I kept receiving messages saying that various Welsh leagues didn’t have any teams in them. In my wisdom, I went to the list of leagues and deleted all of those that I hadn’t changed into Westerosian divisons. This is how the available leagues to add to the Nation Rules then appeared.

But still this didn’t work, I wasn’t able to progress beyond an error message about Welsh leagues without teams appearing, even though I had removed them all from the database. Clearly the Nation Rules still expected the Welsh lower leagues to be present. As such, I had to create all new Nation Rules with only Westerosian leagues. Finally I had success and the league system was set up as you can see below. Note that I don’t have any regional leagues anymore, they are still beyond my abilities with the Editor.

This was very nearly everything I needed to do in order to get a basic system working. However, after all my deleting and changing of Nation Rules, I somehow ended up with no teams based in the Westerosian First Division, a hangover from re-naming the Welsh regional divisions. To solve this I added a lot of random Welsh teams to the First Division, I haven’t got around to changing their names for more Game of Thrones-esque ones.

As you can see from this image, all the teams are stuck with their default reputation and finances. This is something I will have to have a look at in the future, I won’t make any teams super-rich or popular, I will likely aim to copy the average reputations and funding from the English Championship for teams in the Westerosian Premier League, I will then copy from the English League One to my First Division and such like down the pyramid. This will give the league and clubs room for growth and will avoid them all becoming super-clubs straight away.

At this stage I have also re-named Ireland as Essos, the continent from A Game of Thrones containing the Free Cities, Qarth and The Valyrian Peninsula without doing too much further with that side of things.

There is still a lot to do ranging from club names, regions and cities, reputations and finances and other fiddly time consuming things which are essential to creating a somewhat realistic sounding custom database.

If you want to try out the current version of the update, you can grab it from here.

Then when starting a new game, there should be an option to use Editor Data, click there and select the appropriate file.