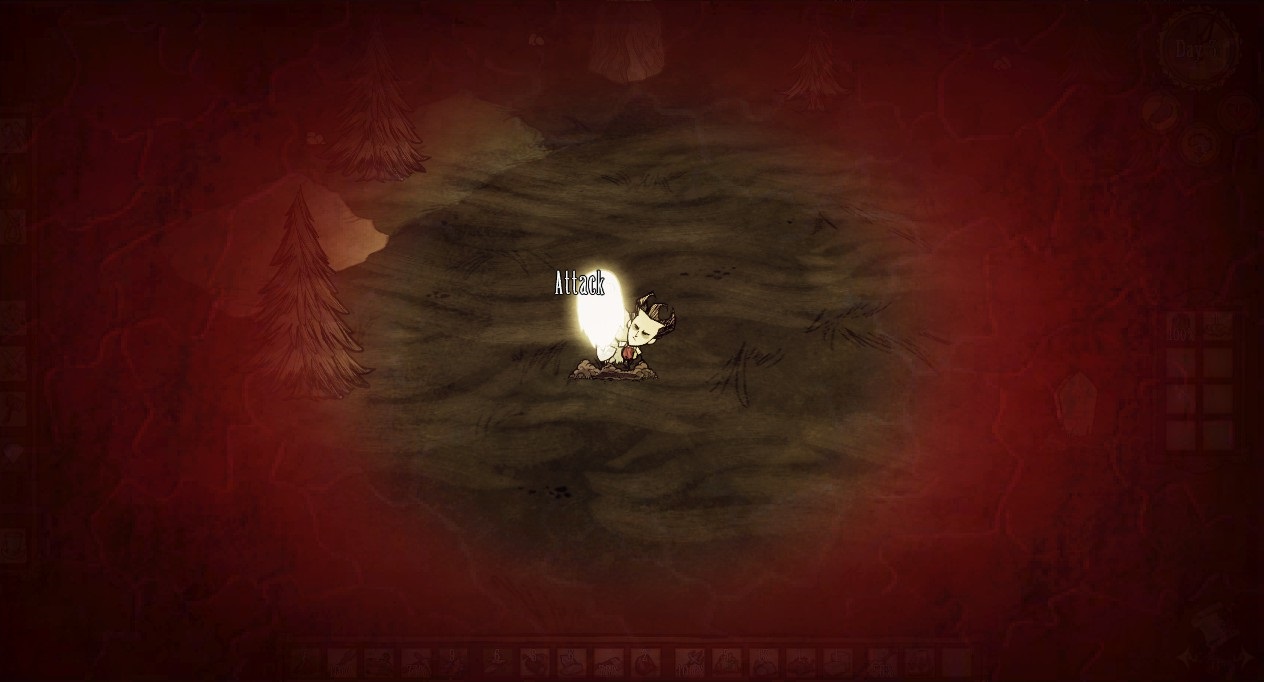 It is pretty safe to say that I have quite enjoyed Don’t Starve, the survival game which I’ve really been getting my teeth into. Hell, I even a little video about. I decided to find someone to talk to at developer’s Klei Entertainment. I was able to pose ten questions to one of the team at Klei, Kevin Forbes. Hit the jump to find out what Kevin makes of comparisons with Minecraft and Terraria and the forthcoming Caves update for Don’t Starve.

Chris – Can you tell us a little about where the ideas for creating Don’t Starve came from and what the early reception to the game has been like?

Kevin – The original idea for Don’t Starve came from a game jam that we did a couple of years ago. We made a very simple castaway simulator, where your character had to guard a fire from an onslaught of leering pigmen. It was a really basic prototype, but we saw enough potential to explore the idea further when we were looking for a new project.

The early reception was generally positive, although there wasn’t much to actually *do* in the really early public builds. The game has become a lot more enjoyable as we’ve had more time to work on it. Chris – Don’t Starve firmly falls into the ‘survival game’ genre, what do you make of the rise of games in this area over the past few years?

Kevin – I think that people are getting tired playing over-the-top power fantasy games all of the time. Survival games offer a very different set of feelings – the player is generally weak, alone, and just managing to stay alive is a challenge by itself. Muscle-bound space marines get a bit boring the hundredth time you see them.

Chris – During development, did you fear that you would get comparisons with Minecraft or Terraria? Have you had many comparisons of that sort?

Kevin – We knew that such comparisons were inevitable, and we actually welcome them. Don’t Starve has some surface similarities with those games (crafting, wilderness setting, etc), but it has a very different focus. Chris – If for one haven’t ever found myself enjoying the two aforementioned games, but I am really enjoying Don’t Starve. What makes this game different from the others?

Kevin – Minecraft is a really great creative sandbox game, with a couple of survival elements. I really love experience of the first night in Minecraft, where the player gets attacked by creepers, and learns that they have to build a shelter. Unfortunately, that feeling fades pretty quickly once you get yourself established. In Don’t Starve, we tried to keep that edge-of-your-seat survival experience running for the duration of your play session.

Terraria is much more action and loot-focused than Don’t Starve, although I haven’t personally played enough of it to know the finer details of its gameplay.

Chris – Have you experienced any technical challenges with the game and getting it to run in Chrome?

Kevin – Adjusting to the web world was quite a challenge for a bunch of console developers like us. New languages, new frameworks, new expectations… we spent a lot of time cursing at CSS and Javascript before we built up enough surrounding tech to get the game running.

Chrome’s graphics support can be spotty at times – it really requires users to update to the latest drivers, and it blacklists a lot of configurations that we are able to run on with our standalone client. The average machine on the Chrome Web Store also seems to be not as powerful as what’s on Steam.

These growing pains are worth it, however, because it lets us bring our game to an audience that we would have otherwise missed.

Chris – Are there any console or mobile plans ahead for Don’t Starve?

Kevin – We’re always looking at other platforms and evaluating them. I can’t go into any specifics, unfortunately. Chris – How much influence does the community have over what direction the game takes in future?

Kevin – We have a very active community on our forums, and we try our best to keep them in the loop as the game develops. Every time we push a new build, we sift through the feedback to find issues that we overlooked, or features that aren’t being well received. Obviously we can’t do everything that every player wants us to, but if enough people voice the same opinion, it usually means that we need to tweak something. Having such a tight feedback loop keeps us on our toes, and tells us right away if our assumptions about a particular game feature are incorrect.

Chris – Do you think that the very hands-off nature of survival games without much assistance to players can be off putting to newcomers?

Kevin – It can be a danger, for sure. You have to design the experience very carefully so that players can learn new things even when they fail in the game. So long as the player is always learning and getting better at the game, I think that they will stick around.

Chris – The adventure mode is hidden away within survival mode, I haven’t come across it yet while playing, why isn’t it easier to get to?

Kevin – We wanted adventure mode to be an organic extension of the core survival experience. If you find it too early (such as if it were a menu options), there is a big danger that you won’t know enough about the game to progress within it. We were also trying to create a bit of an aura of mystery surrounding the whole thing.

Chris – What plans do you have with future updates to the game and what can we expect to see in the Caves update?

Kevin – We’re going to be working on caves for the next couple of months. The initial update contains the first level of the cave system, and a small sampling of the creatures and objects that you can find down there. I don’t want to spoil any surprises, though.

You can find more details on Don’t Starve on the official website.