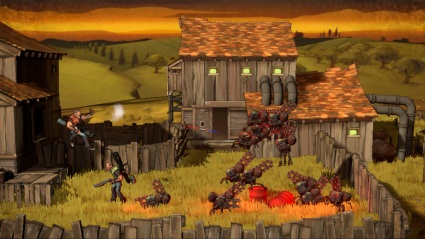 Everybody loves playing with robots in games and everyone loves co-op gaming. If you don’t, what is wrong with you? I digress, Shoot Many Robots is an indie co-op robot shooter with a stunning visual style. Here I talk to Al Reed, studio director and co-founder of Shoot Many Robots’ developer, Demiurge.

The Reticule – Shoot Many Robots looks to fuse retro-side scrolling shooting with the current phase for four-player co-op, what can you tell us about the ideas behind the game?

Al Reed – Our goal with Shoot Many Robots was to take our spin at updating beloved run-and-gun gameplay. We’re huge fans of side-scrolling shooters, but their original design was to suck quarters and they haven’t received a proper update since. Our update really relaxes the difficulty and frees the player’s movement. We’ve nixed eight-way aiming, something we feel is a hold-over from the dpad days. We’ve added modern conveniences like aim down sights (left trigger) from Call of Duty and given the player a bunch of movement abilities.

The second big update is the integration of a skill-based RPG system into the genre. We’ll have over 200++ items in the game to drop into five equipment slots. This isn’t a game where you pick a Night-Elf Huntress, or whatever, it’s about finding gear that works well for your play-style. The combinations are endless – we’re still discovering new mixes of gear. Already you can build anything from a melee class, a fast-moving dodge expert to a heavy-weapons character. TR – Judging from the trailer the game has a slight Team Fortress 2 style to it, what made you decide to go for this artistic style?

Al Reed – We’re honored and flattered to be compared to TF2. At Demiurge “great style” is one of the pillars for all games we develop and downloadable games are really an awesome place to take some risks. It was a torturous journey filled with many dead-ends, but I’m blown away with what the Demiurge art team came up with. The team here wanted a look that was distinctive from other games, drawing heavily on comic book and other hand-drawn influences. Culturally, we were really inspired by the look of old steel towns. To achieve the look the artists wanted, we created a new renderer that features tons of lights, shadows, soft, ambient lighting and a comic-style outlining on everything in the game.

TR – Robots are always a good choice, but how did you come to choose robots as the focal enemy in the game?

Al Reed – We loved killing Zombies in Left 4 Dead and others, but we wanted to put a new enemy into the crosshairs, so we fused the two. The robots in Shoot Many Robots pop in a gush of “oil blood” when they explode. We even modeled entrance and exit wounds. Robots are the new Zombies!

TR – How will the co-op work, will it be drop-in/out with bots taking places of human players and will there be any single-player modes?

Al Reed – You can play with anywhere from 1-4 players with up to two players on one console. You can drop into one of your friend’s games anytime, but you’ll have to wait for them to finish one of our 4-5 minute missions. Like any good RPG, we wanted to scale the difficulty of each level based on how many players were in there.

The game plays wonderfully single-player and if you don’t have friends online I think folks will have a good time gearing up their character for the next run in a group. We’ve also got really slick matchmaking so if you’re looking for a match with others at anytime you’ll be able to find one! TR – Do you not feel that explosive red barrels are somewhat cliched in gaming today, or was that perhaps why you made such a point about them in the trailer?

Al Reed – Cliché is something we’re having a lot of fun with in Shoot Many Robots – even down to the title of the game. Our title serves as our compass when it comes to designing features. That’s not to say that we think of this game as a parody. We don’t. There’s a little more nuanced satire in “Shoot Many Robots” than anything we’d call a parody. We’re constantly asking ourselves if a feature belongs in a game called “Shoot Many Robots”. We’re determined to make a no-nonsense robot-blasting good time and part of that means embracing those game clichés. We’ve also got a robot (the “Suicide Chopper”) that has one of those barrels strapped to his back with a lit fuse and he charges at you before blowing up so we’re having fun with the old tropes…not just re-using them!

TR – You show off an inventory and store in the trailer, will characters have persistent stats and weapons, or will they just last for the current game?

Al Reed – Hells-yeah. As I mentioned before, we’ve built a compelling RPG system with loads of loot, guns and toys to play with. Much of the loot actually unlocks abilities like our “Body Slam” attack so you end up building your own class by picking the right gear for yourself. You’ll be able to carry your gear around with you from match to match and each item has a unique look so your friends will know what awesome tools you’ve decided to loadout with!

TR – Are we really going to be able to blow up our toasters?

Al Reed – What you do on your own time is your own business. TR – Do you fear robot reprisals for the robot slaughter in the game?

TR – What platforms can we expect to see Shoot Many Robots appear on?