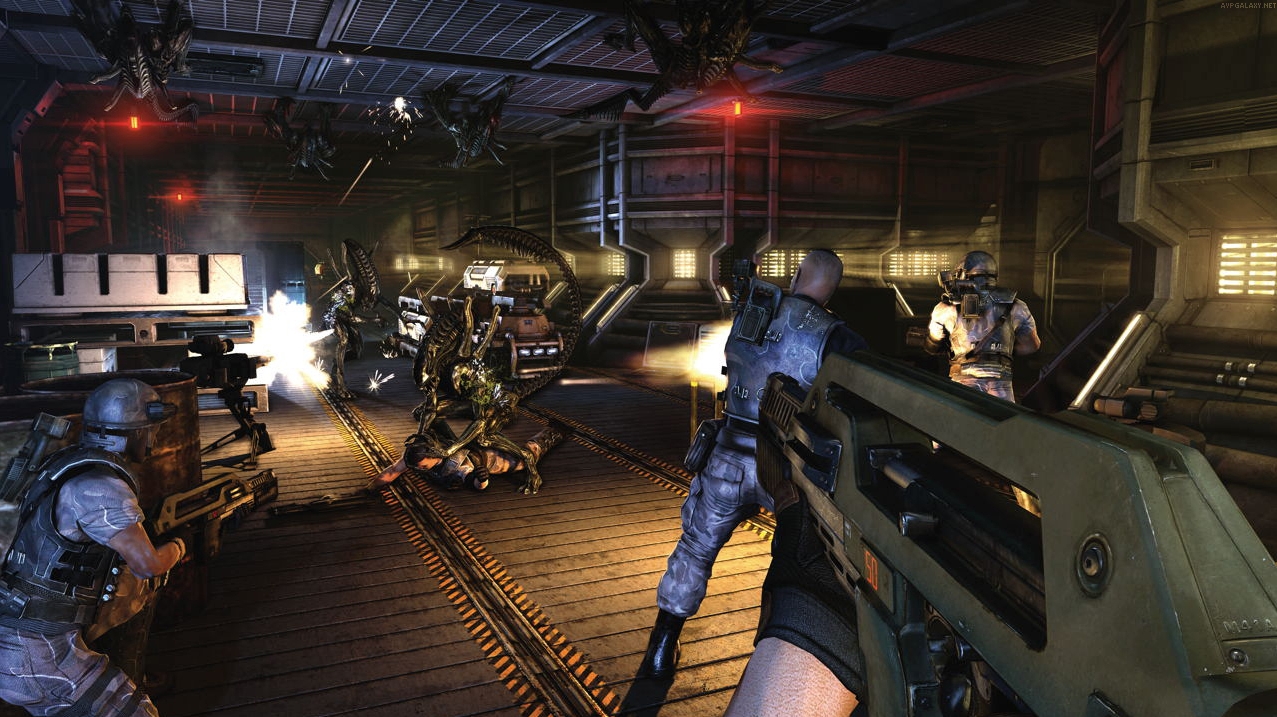 “You’re the marines, the key to survival is to work together.” It sounds simple but when Xenomorphs are leaping all around, composure and teamwork make way for terror and unfortunately damp trousers.

Playing two 6 vs 6 LAN games at Rezzed we demoed the online deathmatch gameplay of Aliens: Colonial Marines. As aliens the games is most similar to a hack-n-slash. The small warehouse we played offered aliens chances to ambush and annihilate individual marines, but the narrow hallways made it easy for the marines to stick together.

Unlike most other online games tactics played as much a deciding factor in which team won as skill. Charging head first into a group of marines will just end in a bunch of smug marines high-fiving each other and acidic blood splattering the walls.

A co-ordinated attack is needed. Either isolating and picking off individual marines or attacking with an all-out assault from all directions. And it really is possible to attack from all directions as the aliens have the ability to cling to walls and ceilings. Dropping down on a marine while decapitating him with your tail is immensely fun as well as a great tactic to terrify the opposition.

As marines we played on a much more open map. The long range of sight, which favoured the marines, was offset by the lack of cover, meaning that an alien ambush could spawn from anywhere. Playing as a marine is nerve-wracking experience. The lack of a HUD creates a real sense of immersion with the game. Information about the game is projected through the environment. Number of bullets remaining are displayed on the side of weapons, health is shown through the screen darkening and then there are the motion sensors.

Much like in the films the marines have sensors that show the location of any nearby aliens. Scanners that show red dots and emit a haunting beep whenever a Xenomorph is near. Knowing where the aliens are can be the difference between life and death. However, the sensor can’t be used at the same time as a gun. So switching between shotgun and sensor quickly becomes a necessity for survival.

Other than this little innovation the marines side plays like most other FPSs, albeit against a much more terrifying foe. Weapon layouts allow you a primary and a secondary weapon. Kill streaks appear after getting three, five and, presumably higher numbers of kills without dying (five was the highest I managed). What sets Aliens: Colonial Marines apart isn’t in the mechanics of the game, which are competent if not particularly exceptional, though – it’s in how it feels.

As Xenomorphs there is a feeling of true power. Sighting a lone marine, leaping into the air and tearing him to shreds in one swift movement offers a feeling that incomparable to anything in any other competitive online game. It’s easy to get carried away with this sense of power and attempt to decimate a group of marines before getting shot to pieces. But even after being slaughtered that sense of power remains, with only sensibility keeping it in check.

As marines there’s a constant feeling of helplessness, of knowing that if a Xenomorph turns the next corner then a gun will be no match for its flailing tail. Taking one down feels like a real achievement. Playing as a marine feels like playing as an underdog, like facing an insurmountable foe and winning.

Remarkably despite this the two teams are remarkably well balanced. Despite being wildly distinct in playstyle both the Xenomorphs and the marines have an equal chance of winning. It all depends on how well the team works with one-another.

The most impressive thing though is how the game recreates the terror of the Alien films. It’s difficult to play as a marine without cracking up and shouting “Game over, man. Game over.”