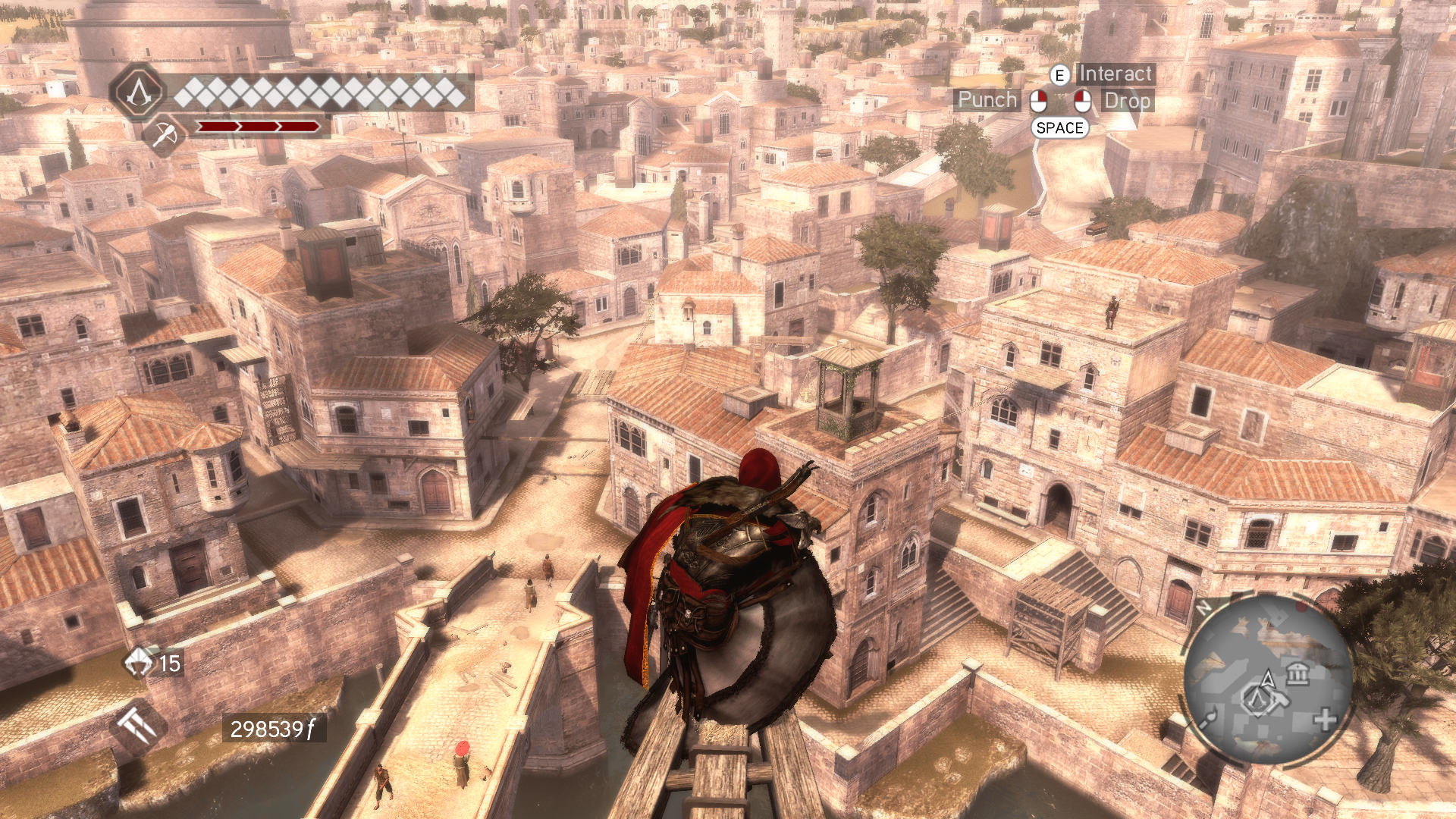 Ever one for having my finger on the pulse of gaming trends, this article started out as a review of Assassin’s Creed Brotherhood, a game you all doubtlessly played eight months ago during a barren winter spell that saw countless far more legitimately anticipated titles step aside for little more than whatever the last Call of Duty instalment was.

Instead of a review, it’s become something of an ode to lateness. If you weren’t part of the first wave, perhaps you played this version (the PC one) when Ubisoft got round to slapping it together in March. Three months ago, I hadn’t even embarked on Desmond Miles’ first journey into the Animus. And that’s why I’m really here, looking at this game at this time. It’s a completely mainstream title that is worthy of thorough evangelising. Not because I’m necessarily going to slap a coveted red mist award on at the end and declare it the best thing ever. But because I rather suspect there’s people out there making the same mistake as me.

Two things kept me away from the series. Firstly, the rather messy digital rights management that Assassin’s Creed 2 was lumbered with. Secondly, because the first game is reputed to be an absolute chore. On the first count, Ubisoft have finally seen reason: you’re no longer in trouble if you have a patchy net connection, even if they’ve still sunk the claws of the DRM a little deeper than most publishers. As for Altair’s adventure being this embarrassing ancestral figure, a debauched, tedious grandfather who must be tolerated if you ever want to be admitted to the presence of his accomplished legacy… well yes, that’s kind of exactly how it is. Wild horses couldn’t drag me back to Assassin’s Creed 1, a game in which one sixth of all crucial intelligence can be gleaned from collecting flags on an obstacle course. Your historically invisible guild of master assassins seems more like a special catch-up class for delinquents of work-shy cool kids. They’ll let you sit on the backseat of the bus-home if you take out some archers first. Honest.

Oh, I’m overemphasising just how bad it is a little. The truth is, if you focus on the main storyline and ignore the extras, it’s an entertaining experience that only lasts a little too long. The unprecedented, visually resplendent setting of the third crusade is worth the price of admission (and if you’re paying over five pounds, you’ve got it all wrong anyway). Even if it was half the uphill struggle it’s been declared to be, Assassin’s Creed is a neat study in how gameplay and story are joined at the hip: when you’re everybody’s errand boy, the title of Master Assassin tends to fall into disrepute. A game that is essential to play once, and hope to never play again

Because it’s fascinating how the series progressed with essentially the same elements, but ended up as an infinitely more satisfying package. Brotherhood (and the upcoming Revelations) seem to suggest that Ubisoft hit on something special with Ezio and the world of Renaissance Italy that they didn’t quite get with the original Assassin’s Creed. But really, it comes down to content. The Ezio games (thus far) are packed with things to do, places to go and people to see to a quite ludicrous degree. Much has been written already in reviews of the herculean effort that went into Assassin’s Creed Brotherhood’s release, but I’m most impressed by the sheer economy of the undertaking. Every element was farmed out to a specific and often far-flung wing of the company, then pieced back together under the watchful eye of the project leads at Ubisoft Montreal. Yet somehow, every aspect of the game gels together, and because many of the assets are so well made, you really don’t mind when they’re reused elsewhere. The quest for content was always going to lead Assassin’s Creed to multiplayer, and the economical thinking behind the project means that the character models from the mode turn up as one-time assassination quests. In any other game, this would feel very cheap indeed.

In Brotherhood, they’ve practically reached a tipping point where there’s so much to do that it’s starting to undermine the game. It doesn’t help that Assassin’s Creed 2 ended with one of those ridiculous “I could kill you but I won’t” moments that revenge stories so frequently have, necessitating an extension to the story built around much the same arc as its predecessor. Distracted by missions involving the hideouts of a Roman cult, the usual eavesdropping, assassination and pursuit missions, the new Assassin’s Guild recruitment / assignment meta-game, bonus suppressed memories of Ezio’s lost love and a continuation of gaming’s greatest bromance involving history’s foremost polymath, it’s very easy to lose track of what’s going on in the actual story-missions. Hell, that last sentence was a total mess, so that gives you some idea.

But it’s a game, and even with a weak story, a game will always rise to distinction by having a whole range of things to do (but not hours of playtime in which you do the same thing, to give you a sneak preview of my upcoming Alice: Madness Returns review). Content is also key in why games are in the peculiar situation of offering Sequels that are often a quantum leap on from their first instalments. This isn’t the first time that I’ve kept away from some of gaming’s finest properties merely because the series started with a daunting hill-start of a game. Mass Effect 2 wasn’t just twice as good the original: it was worth playing the original game twice for. And that’s saying something. Other mediums can rarely boast this, and few would want to. As hard as developers try to ease new players into game stories effectively in medias res, there’s always going to be a section of the market that is simply unwilling to do so. This is surely doubly true in a series like Assassin’s Creed, which makes it very clear to the player what their completion percentage is. If many players can’t bear to leave their game at ‘only’ 90% synchronisation (“But I haven’t lived life exactly as Ezio did!”), it seems unlikely that similarly minded newcomers are ever going to want to miss out on the early stages of the game. Compound this with a continuity that will span four games with the release of Revelations, you’ve got to wonder, as good as a series can be, isn’t there a point where it reaches some kind of critical mass? Where sales are going to drop off because you’ve spun the story out just that little too far?

But here’s a head scratcher. If you want an example of a game series that represents the benchmark for backstory complexity, as well as being the most obvious counterpoint to any detrimental effect of ‘the uphill series’, you need look no further than Metal Gear Solid. Perhaps it’s merely the addition of the final word in that title, but I think we’re all pretty content to play those games having never attempted the first two instalments. And even among those who’ve actually played Metal Gear 2: Solid Snake, you’d be very hard pressed to find someone who had a fistfight with Gray Fox in a minefield before they’d played Metal Gear Solid.

Perhaps that ought to be my inspiration from now on. To forget continuity and just seek out deserving games whatever their ancestry. Chances are, you’ve been doing this anyway and haven’t got a clue what I’m on about. But maybe, just maybe, it’ll inspire you to give something you’ve been neglecting a fair chance. And if that happens to be Assassin’s Creed, give yourself a self congratulatory pat on the back.