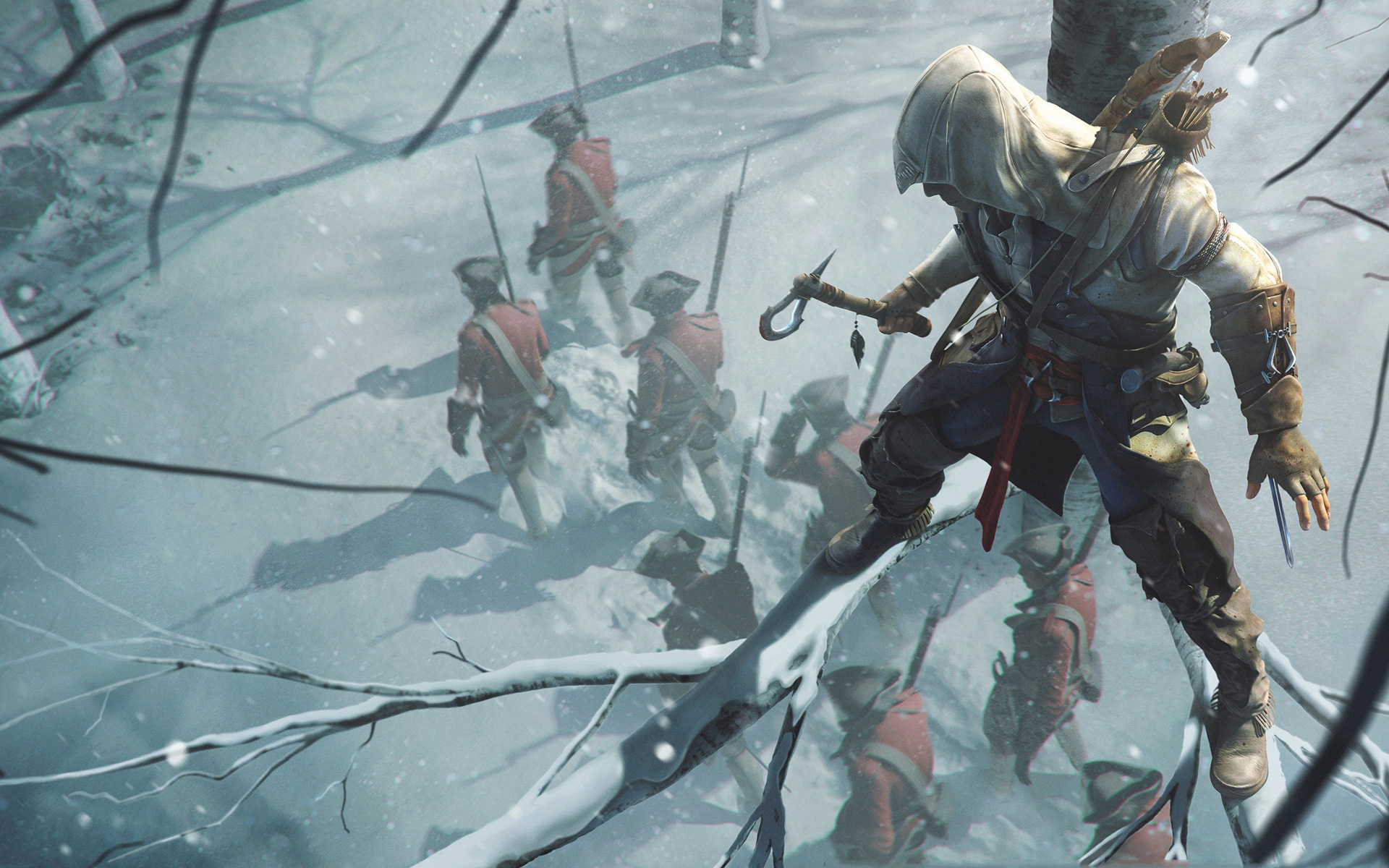 History is a funny thing. Napoleon said “History is a set of lies agreed upon.”  Easily misread, misunderstood or misinterpreted, it is written by the victors and those who do not remember it are condemned to repeat it. Perhaps that is why Assassin’s Creed III comes to deliver a bloody rendition of the American Revolutionary War in video game format.

Just in case it has passed you by, Assassin’s Creed puts you in the role of modern day assassin Desmond Miles as he relives major events in the lives of his ancestors and in this way discovers the location of various MacGuffins which which hopefully save the day, stop the Templars and avoid a rapidly approaching apocalypse. AC III, the fifth core game in the series, features the lives of Englishman Haytham Kenway and son Ratonhnhaké:ton (better known and here-after referred to as Connor) in mid-18th century America.

Let us start with the essentials: assassining. Sneak up on your enemies and ease a blade between their ribs, pull them over a balcony railing or drop on them from a height and you feel powerful and in control. Should things get messy, as they often will, and you become embroiled in a fair fight the experience becomes more reactionary. It is necessary to rely on countering attacks, especially against the stronger foes such as brutes and officers.

The Assassins of the colonies have forgotten a few tricks since the days of Ezio Auditore, the hook-blade and bombs apparently not having made it across the Atlantic. Rope-darts and all-pervasive firearms mix things up somewhat but eventually you will tire of the slog and flee. In forests this is easy, just keep running, but in the soldier-packed cities you must rely on hiding and the new feature of running through open houses or bedroom windows which instantly break the pursuit.

Beyond killing, the key mechanic is again free-running. Efforts have clearly been made to make the running experience smoother and this is most evident in the vast open map of the frontier. After four or five hours as the relatively plodding Haytham in Boston, playing as Connor running across the branches and around the trunks of the forest is the essence of freedom. Just hold the right trigger and go!

Connor, being born and raised a native Mohawk, also introduces hunting and trapping to the series. The frontier is filled with hare, beavers, wolves, deer and such to track (by using clue-markers to highlight a target on the mini-map), kill and skin for parts. It is a fine way to make money or to gather ingredients for crafting. Each species has its own traits: deer are skittish and very sensitive, they must be lured in with bait, but bears and wolves will attack if you get too close. Fighting predators initiates a little quick-time event – the first in the series, I believe – which you either succeed a number of times or take damage until one of you dies. The QTEs are not too egregious but do take you out of the flow somewhat especially if you run into a pack of half a dozen wolves, which you then after skin each and every one or die for acting out of character.

This being an epic tale of war, revolution and conspiracy in the age of empire, you also get a boat. An upgradable frigate with cannon, swivel-guns and a colourful first-mate. It is impressively intuitive to control and (unrealistically, but entertainingly) responsive. Go to full sail or half sail instantly with a command and fire a barrage left or right by look in that direction, hold-and-release the trigger when ready to fire. Mix the experience up with open waters and reefs, freak winds and monstrous waves, enemy man-o-wars and schooners and you have an exceedingly fun and varied time of what could have been an uninspired mini-game. It is a shame to be so underused; there are only a couple of naval missions in the main story and the rest could easily be forgotten or missed. Collecting trinkets around the game world also opens up unique action-packed levels which seem to serve the role that secret locations and dungeons did in previous games. These offered some of the most exciting scenes in AC III and may never be known by many players who dismiss the trinkets as just for 100% completers.

The Assassins Guild suffers from a similar complaint. This time you can, with work, unlock six unique and characterful recruits for the beginnings of a guild in the new world. They each have their own unique unlock-mission, their own backstory and each provide a different player ability (serving as a combination of assassins and other guilds from previous instalments). This is all great and giving distinct character to your recruits is a welcome improvement. However… however, I was unaware until well after completing the main storyline that there is a system for sending your recruits away to complete missions across the east coast, similar to the Mediterranean defence system of Brotherhood and Revelations. It is hidden away in a sub-menu accessed from the guild abilities selection screen and, thanks to using a hollow-bullet-pointed list, could be mistaken for offering zero missions on every location. It seems completely unnecessary and, evidently, poorly highlighted.

I lay the same accusation at the foot of the homestead, crafting and trade systems. Around the same time that you acquire the ship, you begin being able to acquire new residents – upgrades – for your mentor’s homestead, to build a town with farmers, a mine, a pub etc. Each resident’s skills can be upgraded by pursuing missions with them, allowing them to produce more items. These items, with sufficiently experienced artisans, can be crafted into different items some of which provide new items for Connor, can be traded via a convoy system or just make the homestead look a little prettier. And all of this is given only the most cursory of explanations in the game. I never seemed to need the money and, even well after completing the storyline and spending time exclusively improving the residents, still wasn’t capable of crafting anything of use.

There is so much of Assassin’s Creed III that feels superfluous, like designers had a good idea and no-one stopped to ask if it was worth including or if it was being made the most of. It will surely add many hours of play for people who are determined to reach 100% completion but very few will find it actually fun to do so. The exception is in the optional mission criteria, such as only killing X enemies or reaching the target in under so many minutes, which add challenge and worthy re-playability.

So much about the mechanics, but it is the world of the series that is particularly interesting. In previous instalments we have visited crusade-era holy lands, Renaissance Italy and Constantinople, always bookended by Desmond and the gang in modern-day labs and hideouts. It is a real pleasure to be able to visit in some small, game-ified way the cities of New York and Boston as they were in the 1770s, to see the sights and soak in the atmosphere. It is a beautifully realised game: thought the technical quality may not be the best, the art direction is top-notch. The voice acting is a joy to listen to, well performed without being exaggerated and it’s just nice to hear such a range of accents for once, accurately reflecting the reality of such melting-pot cities. The soundtrack needs special mention for being at once unnoticed and immensely powerful, truly orchestral.

The game also has multiplayer.

Oh, alright, I’ll say something about that too. It is very much the same as before – a game of hide-and-seek with knives. There are many types of match — free-for-all, team deathmatch, all-against-one, and Domination in which teams vie to control zones. You earn more points by killing targets without being spotted, by hanging close to them for a while before striking and for kill-streaks. The more points you earn and the more you win, the quicker you unlock new abilities and aesthetic options for various character models you can play as. It is a pleasantly rewarding time should you find yourself in a match with players who match or compliment your play style. I find too often other people run and leap around which isn’t much fun for my quiet and un-noticed style.

If you can gather a few friends together, there is the new Wolfpack mode, a co-op challenge against 25 progressively more difficult sets of AI enemies in a way reminiscent of Retribution‘s Last Stand… but I can’t tell you much about that because I don’t have any friends… with this game.

All in all, Assassin’s Creed III is a very familiar experience. It is a strong, enjoyable game of stabbing and shanking and shooting in a dramatacised historical setting with too much chaff. If you have played the series up to Revelations you will probably enjoy this but it won’t be your favourite. If you are new to the series, you can pick up Assassin’s Creed II for cheap second hand at most stores or on download services and will get as much out of it.

One thought on “Assassin’s Creed III – The Verdict”