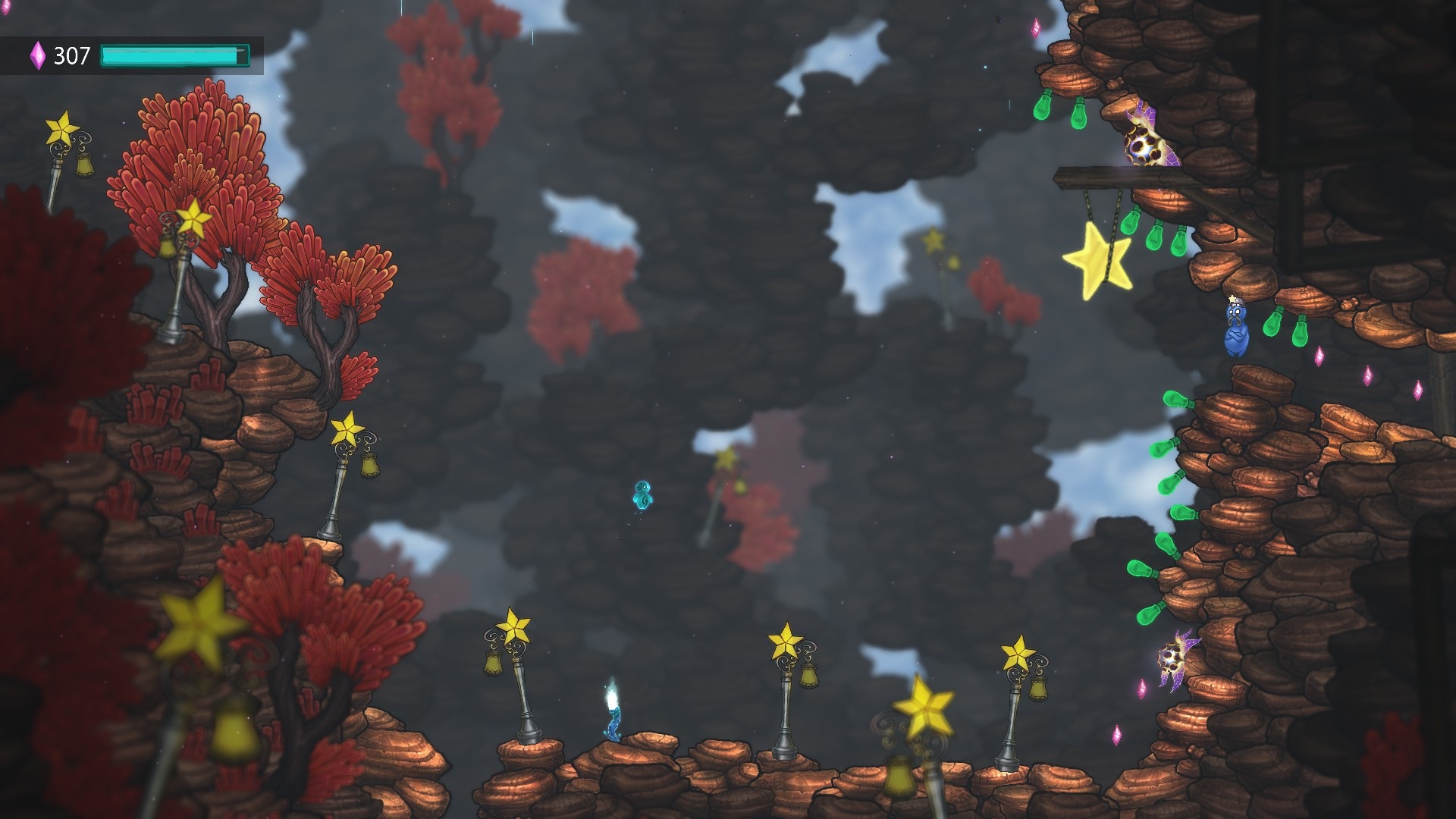 I always find it a shame when a game you were looking forward to just doesn’t live up to the potential you saw in it. I’m talking about Beatbuddy, the game I played at Rezzed and fell in love with. But that was only one level that was playable at the show and sadly the final game just doesn’t match up with the brilliant snap-shot of it I played. By no means is it a bad game, it just goes from being an almighty and truly amazing experience…to being simply an amazing game with a few aspects that got to me.

The best thing about what I played at Rezzed was that the level took twenty minutes tops to complete, it was short sharp and very sweet. Levels in the full game? They may contain clearly defined different sections between playing as Beatbuddy on his own and levels in his little submarine but they feel like they just drag on and on. The majority of chapters took about fifty minutes to complete and after a while, the funky beats that drive each visually themed area are no longer so funky.

This wouldn’t be a problem if there was better use of checkpoints. In a world where more and more indie games go with an instant-respawn mechanic, getting thrown back to a checkpoint which might be five baddies, a timed sequence and a beat-challenge backwards is galling. It gets even worse in some sections which become a maze of different routes, locked doors and key-holes. I came across one section where I had to restart that section of the level because after dying, there was no route back to where I had left the funkily shaped key before my death.

There were also times where the difficulty level would spike considerably with a massive wave of enemies arriving or an extremely difficult puzzle to solve. Difficult, not because the solutions is hard to figure out, but difficult because the pinpoint timing and accuracy required is night-on impossible to achieve. Or at least, not without trying several times until things fall into place. I was also going to have a moan about lining up of bounce pads, but that was a case of me being totally blind to the sound which indicated when two pads were lined up correctly.

For the most part though Beatbuddy is a really fun and engrossing game with an exceedingly cute lead character in Beatbuddy. He is, it must be said, a silent partner in the story with the evil Prince Maestro trying to destroy the music which makes up the world of Symphonia by kidnapping Beatbuddy’s sisters, Melody and Harmony. The Prince is an over the top bad guy and I don’t want to ruin the ending but his closing lines are perfect. There is also your able assistant Clef who helps out with the little sub which he manages to keep breaking. The story is well worked, but never takes too much away from the music which underpins the entire game.

Without the music and the way everything in the levels plays off the beats this would just be an enjoyable but average game. The way each song influences the visual style of levels and the beats of the music play with the puzzles is brilliantly crafted. Having to activate machines to turn the beat of the music, and in turn various environmental objects on is great as the entire feel of the level changes with various creatures and objects bouncing and pulsing.

While it can get frustrating at times, I know that I threw down the controller a few times and swore I wouldn’t go back to it, the lure of the beat and Beatbuddy’s dancing is so enticing. During those moments of frustration I was going to only give this an On Target rating, but it does deserve the Headshot, just know it isn’t quite perfect.