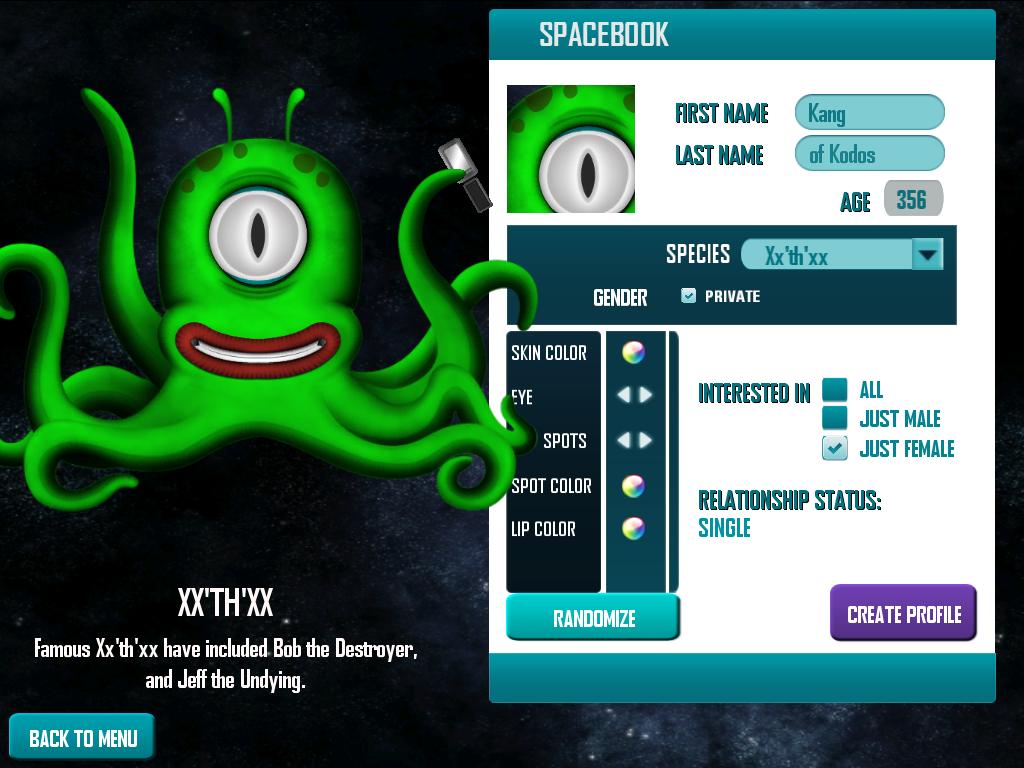 Take Facebook and Twitter and throw them into a game rather than making games for them and what do you get? Redshirt is the answer with Spacebook at its core. This will be the upcoming first commercial relase from The Tiniest Shark, one woman UK indie dev with Mitu Khandaker leading the way.

While Mitu might be making Redshirt on her own, she has the help of Cliff Harris from Positech Studios (Democracy 3, Gratuitous Space Battles) with the whole publishing and PR side of things. Coincidentally I bumped into Cliff at the Rezzed show back in June and had a few words with him about Redshirt amongst other things.

When Cliff sent me access to the Alpha build I was very excited to get playing what could be described as being Facebook, but in space. Cliff described it in some more detail as “kind of like a Red Dwarf simulator, so you’re a lowly member of a crew on a space station with a space mop, and a huge galactic war occurs, but it’s nothing to do with you because you just scrub the decks.”

There isn’t any actual Facebook integration so when you start a new game you create a character. You can choose from making a human, alien, slightly more alien and OH MY GAWD IT’S A MONSTER!!! Wait, just an alien but a very funky one, think of Kang and Kodos in The Simpsons. Once you’ve made yourself, with perhaps the most important feature being your shirt customisation. I moved away from the Star Trek Redshirt reference and took on a suave black and blue trim.

While in my first playtest I chose a fairly bog standard human, at Rezzed Cliff said that at Rezzed Kang and Kodos were “massively disproportionately represented with people sitting down and they go through the races and go ‘Ah, I’ll be the alien with the big eye and the spots!’ – people love that and that character, and it’s going down well.” I’m not surprised it went down well really, who doesn’t want to play as their favourite giant-squidgy-tentacle-alien.

There are certainly elements of one of Cliff’s games, Kudos within Redshirt with managing friendships and trying to improve your skills to work up the career ladder. What makes Redshirt stand out though is Spacebook which is an amalgamation of Twitter and Facebook. As Cliff told me, “we now know, with the society that we’re in; if Star Trek was accurate, Picard and all that would be updating their Facebook status and tweeting about bloody Klingons and… that’d be happening because we’ve become that shallow! And we find that quite calming; it’s a very sarcastic and sort-of comedy kind of game.”

He is very on the point with the sarcastic humour. For example during each day you have a limited number of activity points to use but if you run out, there is nothing to fear. You can just use your hard earned credits to buy more activity points. Remind you of a thousand Facebook games?

After my first game crashed on me I went back in, this time with the goal of progressing through the career paths as fast as possible. The career paths are worth a chuckle to take a look at, but probably aren’t too far away from what would really take place on a space station. At the lower levels you have Hazardous Alien Waste Management positions through to being a Virtuo-Augmento-Deck Programming Intern to the holy grail of Commander’s Assistant.

My hopes of getting the Hull Painting Technician job collapsed when I damaged my relationship with the hiring manager so much he wouldn’t take a second look at me. It didn’t help that I kept inviting them to events they didn’t like and ignoring them when I made an event they might have enjoyed. Not my wisest move, but it goes to show how difficult you might find things if you don’t take care with your actions.

I’m quietly looking forward to Redshirt, especially now I’ve had a chance to play it and see what it is actually like to play. I spent quite a lot of time on Kudos back in the day, I can see a similar thing happening here.