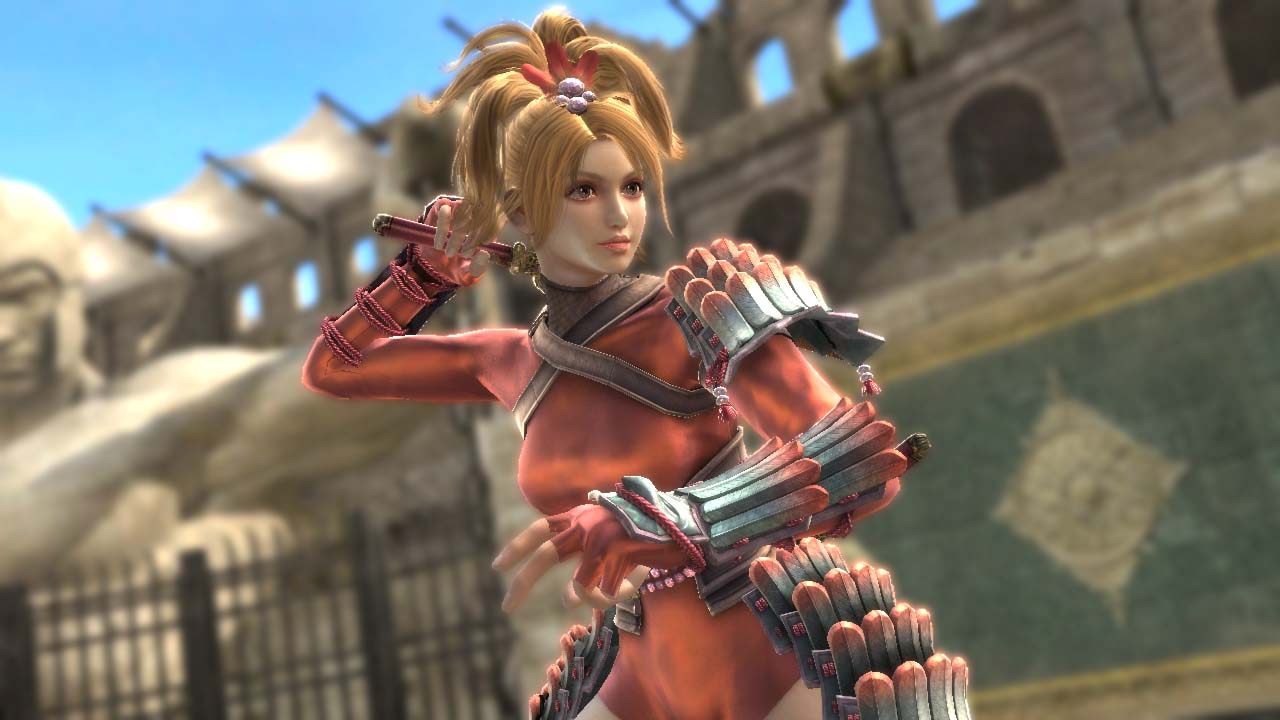 Soul Calibur V releases in Europe today, having been available in North America and Japan for most of this week. It came away with a headshot in Tuesday’s Soul Calibur V review, and if you’re thinking of joining the fight you’ll need to do some catching up to the rest of the world, especially as my main criticism was of how the game doesn’t do quite enough to get you up to speed on its new systems and massive move list. The info is all out there if you’re willing to spend time researching it though, so here’s some of the fundamentals of the new game:

This is the power gauge next to either player’s health bar, previously known as the ‘Soul Gauge’. The main difference now is that you can charge the gauge fully twice (indicated by the number in the centre of the gauge). Most of the moves on this page use a percentage of your charge, and trying to trigger them with insufficient power will result in nothing happening.

The showy, big new combo moves. These use a full charge of your critical gauge, but they can be blocked or side-stepped. Or you can be stupid enough to trigger them out of range of your opponent (doh). The following trailer shows you everything you need to know: [youtube id=”Ebaw83w2R9o” width=”600″ height=”350″]

Or in other words: If you’re on screen-left, press down,down right,right x2, followed by “A+B+K” (the upper three face buttons on your joypad, or the rear-right trigger). The directions are flipped if you’re on screen-right. Easy.

Honestly, I cannot find any examples, though I’ve triggered this on occasion. Brave Edge is simply a supplementary, powerful end to certain combos, achieved by pressing “A+B+K” (again, the upper three face buttons on your joypad, or the rear-right trigger). You lose half a charge of your Critical Gauge for triggering one of these.

Brought forward from the previous games with a little tweaking, Guard Impact is a defensive move that repels all basic attacks at the loss of 25% of a full Critical Gauge charge. It is a little easier to perform than in Soul Calibur IV, executed with left+A+B+K. If you’re being pummelled by an opponent, it can give you an opening in which you can turn the tide on them.

Oddly, Just Guard seems to have much the same function as Guard Impact, except the competitive community feels that it’s a lot more useful. For starters, it’s free. Secondly, it allows you to quickly get an attack in once executed, or quickly take up a guarding position. By comparison, Guard Impact leaves you a little more open for repeat hits and costs 25% of a Critical Gauge charge. This great video from Youtube user AvoidingthePuddle gives you a run-down of the move, though be prepared for a little fighting game jargon:

Just Guard is executed with a single tap of the Guard Button (the lower face button) just as your opponent’s hit connects with your character. Low attacks must be caught with down+G. The reason that Guard Impact still exists is simply that it’s a lot easier to pull off (you don’t have to be dead on with connecting to your opponent’s attack). But with Just Guard, a top player can parry a string of hits, unblockable attacks and worse.

Soul Calibur’s defining feature has always been its ‘8-way run’ system, allowing you to side-step and circle your opponent to avoid attacks and get your own attacks in whilst they’re left flailing about. Quick Step helps streamline this, and when executed will briefly put you outside the range of any ‘vertical’ attacks (though ‘horizontal’ attacks) will still connect.

Quick step is simple to execute: you tap the direction you want to go once and quickly follow up with a longer second press in the same direction. I.e. up,UP or down,DOWN. As the video above shows, you’ll know its been successful when you see cartoonish white lines appearing.

First thing that anyone wants to do with a new fighting game is to mine out all those optional hidden extras, but I’ve stuck this at the end because you may want to stop reading if you’d rather not be spoiled! Anyway, unlocks are pretty straightforward in Soul Calibur V (there are multiple methods for some unlocks, but the easiest is listed here):

Oh, and as you climb the Player rankings, you pick up titles for your profile, as well as a huge array of clothing and weapons for use in the Character Creation mode!

4 thoughts on “The Reticule’s Guide To Soul Calibur V”