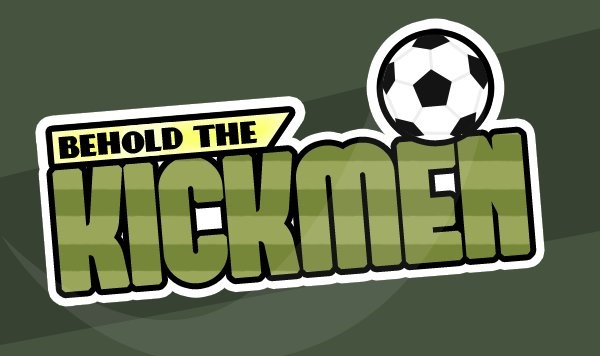 What happens when someone who professes not to have looked at anything football related since the Panini sticker album for Mexico 86, decides to make a football game? You get Behold The Kickmen, the upcoming game from Dan Marshall, the brains behind Ben There, Dan That!, Gun Monkeys and The Swindle.

When I write about Dan’s new football game, I am constantly tempted to add an exclamation mark to the end of the title, in the time honoured tradition of Ben There, Dan That! and Time Gentlemen, Please! But as Dan describes it to me over email, “Those games are deliberately frivolous, hence the playful ! at the end. BEHOLD THE KICKMEN is a deadly serious football simulation, and as we all know there’s no room for fun in the World of Football.”

I get the feeling Dan is pulling my leg, as since April, when Dan first started to really talk about the game on Twitter, I’ve found myself smiling at his Vine’s and enjoying the look of the action. At first, some people didn’t understand what Dan was doing with Kickmen, people are now buying into his vision for how football should be played. Dan opined “quite a lot of people even if they hate football enjoyed playing Sensi and Speedball etc, and I think quite a lot of people would play something along those lines, but the mawkishness of football culture is just kind of offputting. Behold the Kickmen I think is a nice ‘in’ to being able to play a football game from a lofty position of self-superiority.”

You thought I was joking but I genuinely just spent 6 minutes making a Football game and it's like 90% there tbh pic.twitter.com/UOvd08AuDp

From talking to Dan, and reading his development diaries, it becomes apparent that Kickmen is turning into something much bigger than he expected. He begins his last development diary saying:

Jesus Christ I can’t believe I’m still making this damned game. It started as a fun little diversion and then people liked the look of it and had expectations and eugh pressure.

For someone who has no interest in football, that is now making a football game, I was intrigued to find out more about the development process. Dan revealed that he was always planning to make Kickmen into a (small) full release, but at first he was “thinking maybe something about a schoolboy kicking a ball against a wall, some sort of Super Hexagon style mini puzzle-action thing. And then it took off and I sort of got carried away and turned it into a thing with Teams and AI and all different modes. So, I was always going to have to do this ‘menu’ and ‘polish’ stuff, it just arguably would have been over a lot quicker.” Unfortunately, there won’t be any DLC where you start off your life as the schoolboy kicking a ball against a wall.

While there won’t be any DLC, the schoolboy element of learning how the to play football will come about in the Story Mode. Dan reveals that you can “unlock skills (like passing, or sprinting) and you can spend Goals on upgrading your team, so they’ll react faster, and the Goldkeeper will be better at saving the goals, that kind of thing.” It is fairly similar to the real thing then. When you start playing football as a kid, you are simply just having fun kicking a ball around, you don’t care about sprinting, or trying to lob an opposing player. Dan explains why he chose this approach to learning new skills and trick; “when you started a game it was all a bit overwhelming having a billion rules to learn, so I locked some of them off so you’re introduced to concepts slowly. At first all you can do is kick and tackle, and the more nuanced stuff gets introduced each time you win a game.”

While Dan is still working on the ‘story’ elements of Story Mode, there is a clearly defined end-goal in mind – winning the World Cup. You aren’t controlling nations though, you create your own team which will be starting at the bottom of British Football League. By default, there will be four teams in a league, and five leagues in all, though Dan reveals that “if you’re a maniac you can increase that so the game goes on forever”, which sounds like my cup of tea. Dan expands a bit on this structure: “If you win, you climb the leagues, if you lose you drop down. At the end, you have to fight Brazil United (who are the best Football team) and if you do that you win the World Cup and everyone’s just delighted.”

Spent a bit of time trying to remember what type of haircut footballers have. It's this one, isn't it? pic.twitter.com/zHuFDgk6vo

Being delighted sounds perfect to me, this is after all a game with Goldkeepers, Brazil United and Umpires in place of referees. The Umpires can even give a player a kiss after they Do A Goal (you don’t score goals in Kickmen), which is absolutely lovely. The kiss is brilliant, but I had to check what happens if someone receives a red card. I was fearing the worst, but Dan put my mind at ease. Anyone that is sent off “just run off the pitch into the Red Card Prison. One of the things I learned early on was that anything that stops the football match from going on is VERY BORING, so I’ve tried to cut down things like ‘getting sent off’ or ‘half time’ because sitting still watching some footballers run around isn’t much fun. That’s why the ball can’t go out of bounds – can you imagine if it did and play stopped every single damned time? Eugh.”

It all sound smashing, and I’m looking forward to getting my hands on the game, Dan tells me that Kickmen is very nearly at Beta, and then it will go out for a long period of testing to make it as good as it can be. Though Dan has some strange ideas about how reviewers perceive football games, “the sad thing about making a football game is it can’t possibly get more than a 6/10 because it’s a football game. So by the nature of the beast it’s at least part-rubbish.”

With the Premiership starting this weekend, I’m getting back into the football spirit of things (not that it ever left after the joys of the Euro’s), so I hope Dan is able to release Kickmen soon, it should be pretty special.

My full Q&A with Dan will follow later this weekend.