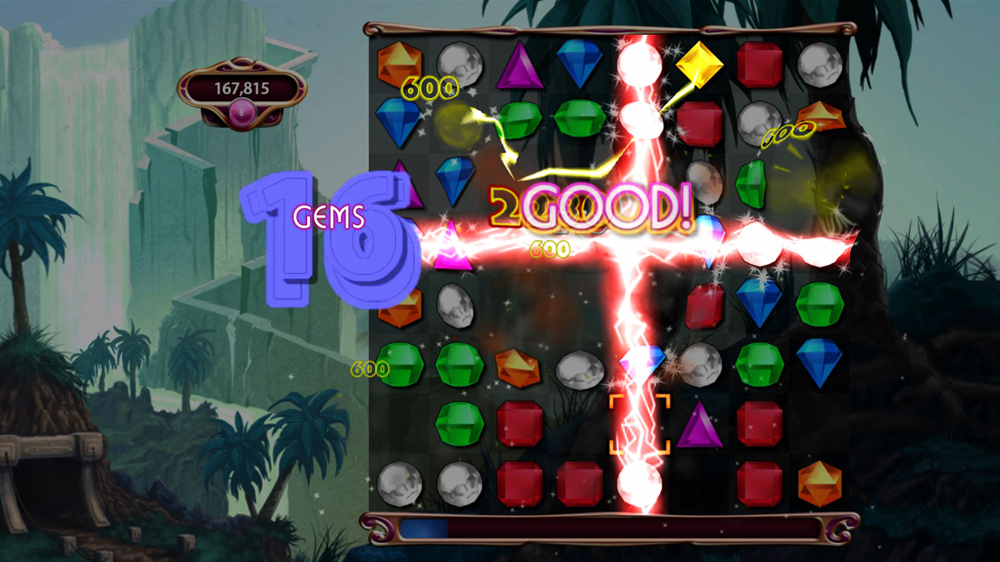 By now, you’re more than likely acutely aware of Popcap’s Bejeweled series – the gem matching game is arguably the yardstick as to which all modern puzzle games are compared to and aspire to match the success of. There’s countless versions of the game with the most recent – Bejeweled 3 – getting a release on Xbox a couple of months ago.

Of course, the usual classic mode is still there, and as addicting as ever: match gems of three or more and repeat as much as you can until you run out of moves in order to rack up as high a score as you can. Explosive gems for four take out the gems around it, star gems for L or T shaped matches take out entire rows or columns, five gems gets you the Hypercube (allowing you to remove all the gems of that colour in play) and six gets you the Supernova gem, obliterating nearly half of the board. This mode is also joined with a mode appearing from Blitz – called ‘Lightning mode’ here – in which the same rules apply, only you can’t run out of moves and you have a time limit, which can be extended by matching certain gems. However, Bejeweled 3 also has a wealth of completely new modes to sweeten the deal. Zen is an endless mode with no time limit with customisable sound and, strangely enough, breathing exercises apparently designed to calm your mind. Poker challenges you to make matches in the style of poker hands, but after so long you must make ‘new’ hands or be prepared to face the coin which has a 50:50 chance of giving you a Game Over. Diamond Mine wants you to uncover artefacts and dig underground using gems near the bottom of the screen to rack up a high score and Butterflies changes several of the gems to butterflies – whom must be saved from the hungry spider at the top of the board by matching them up before they reach him while Ice Storm sees a wall of ice slowly creeping up the board and can only be held back by successful matches, with vertical ones temporarily destroying each ice wall.

The most enjoyable of these though, is Quest mode. A series of challenges incorporating many aspects of the aforementioned game modes as well as some unique ones of it’s own, it’s a very nice way to verse you in the various game modes, as well as providing something to aim for aside from the usual high score chasing. Sure, unlike the rest of the game, it has a limited lifespan but while it lasts it’s certainly the mode with the most variety. That’s not to say the other modes don’t have their charms – each one offers different strategic elements to the others and actually feel different from each other – the quick pace of Ice Storm and Lightning feeling a world away from the more methodical Butterflies and Poker, where you often have to think two or three moves ahead, especially on later stages. Of course, these new modes would all be for naught if that instant magical feedback wasn’t there. That connection between what’s going on on the screen and the feeling of progression firing off the pleasure receptors in your brain that makes you want to keep going, have just one more go, driving you to beat earlier scores. And Bejweled 3 represents the pinnacle of their ten years of doing this. It’s a shame that there’s no true live multiplayer like in previous XBLA outing Blitz and although leaderboards are all present and correct it’s sad to see few options for that simultaneous competitive style of multiplayer, but it’s far from a deal-breaker. And the addition of badges, while a nice touch, seem mostly superfluous (only one actual achievement is tied into them) but all in all Bejeweled 3 marks the current pinnacle of the series – if you somehow have never played a Bejeweled game before, this should be your first stop – and if you have and are looking for more, this should more than provide.