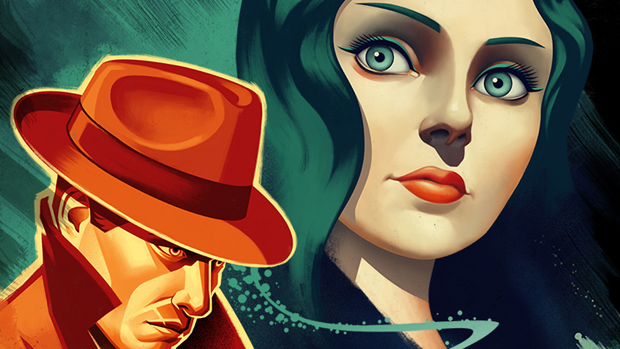 I am odd. A rare flower in the game-journo garden of cynicism and critique – I actually liked Bioshock Infinite. Oh, I’m fully aware of the myriad of reasons people had issues with the game, but none of that stopped me enjoying its quirky, broken and in some places utterly bonkers plot, its enjoyable combat system and the beautiful flying city of Columbia. Burial at Sea is Infinite’s latest DLC, set in the far more popular underwater locale of Rapture. It’s fun, confusing and criminally short.

The slightly puzzled verdict that follows is slightly spoilery of Bioshock Infinite, you have been warned…

“Puzzled” is the most apt word to describe my experience with this “part one” of Burial at Sea. A snack of gaming that holds less water than a goldfish bowl, despite being set at the bottom of the ocean. A return to Rapture awaits, and a brand new case for our universally-challenged detective sets the scene – a familiar young woman, a lost child and even a nosebleed or two. Elizabeth returns, looking older, sultry and wielding a far tougher demeanour than we saw in Infinite – she joins you on a search of the city for a lost child.

The amazing opening (as per usual) leads you around a pre-fall Rapture, and for the first time – actually allows you to explore without being shot at. It’s liberating, if sadly nothing more than a long-ish set piece. Eventually it segues back into the run-and-gun stuff, and even manages, inexplicably, to cram a couple of sky-rails into the tight confines of Rapture. Yes, the combat is firmly rooted in Infinite’s style, although the “vigours” are again referred to as “plasmids” and the enemies are just as shouty and horrible as the original game.

The broken world still manages to be beautifully deranged – neon advertising, fizzing in the damp environments cast the familiar glow of madness over the dripping corridors as you bustle through Burial at Sea’s familiarly creepy world. An early meeting with a familiar face from the original Bioshock gives you a fascinating insight into the insanity already manifesting in Rapture, and as a fan service – it works. Sadly, however, that’s about as deep as this rabbit-hole goes, and soon (way too soon) you are back into shooting nameless mad people and bouncing between waypoints.

The plot is equally shallow, or at least poorly explained. After an almost tense beginning, Elizabeth returns to the traditional role of a mobile ammo/salt supplier or making stuff appear from nowhere, and even the incidental conversations between her and DeWitt don’t seem to shed much light on the deliberately vague story. Clearly the developers have far more planned for subsequent parts, but given the frankly insane price of this two-hour jaunt – I expected a little more to at least attempt to keep me interested. As it stands, the game simply ends just as things are getting interesting.

It’s stupidly short, and although it delivers on recapturing the claustrophobia of the old Bioshock, it just doesn’t last long enough to justify the £12, and honestly – I can’t recommend it. Buy/replay the original or its sequel instead. Or failing that, wait for the subsequent episodes and the inevitable multi-pack.

4 thoughts on “Bioshock Infinite: Burial at Sea Part 1 – The Verdict”