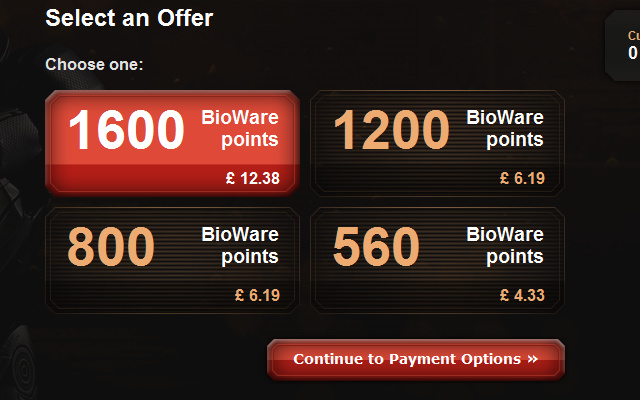 I’ve been quietly fuming away for the best part of 2 years over the pricing of Mass Effect 2‘s mission DLC. At 2480 of their intentionally obtuse ‘Bioware points’, you’re expected to pay about twice what the 40-hour base game costs itself these days. Which is how DLC typically works, but at least there’s usually a discount for those of us who’re never going to be fanatical enough to cough up that kind of money. Not in the case of the PC version: and that’s despite the fact that all but one of the DLC packs comes with the PS3 version, and the fact that Xbox Live has featured Mass Effect 2 DLC sales multiple times.

Until now. Ok, last month too. Sort of, both times.

At present, if you go through the http://social.bioware.com storefront and attempt to purchase any of the Mass Effect 2 DLC packs, you will offered 1200 Bioware Points for the price of  800. 1/3rd off the DLC isn’t exactly bursting with generosity, but I’ll take it, grumbling all the while.

But is this even a sale? As the thread linked above shows, there’s some confusion as to whether this is a glitch, and whether it’s available everywhere. Bioware don’t appear to have mentioned the discount anywhere either, even if the impending release of Mass Effect 3 makes this the perfect time to capitalise on the discount. At any rate: there is no discount on Bioware Points when purchased via Origin or even when purchased via the “Add Bioware Points” option on the right hand side. To repeat: you must got to the top bar on the Bioware social site, select Games > Mass Effect 2 > Official DLC and then click “Buy Now” on a DLC pack you wish to purchase.

This is potentially replicable with Dragon Age series games, which also use Bioware’s irritating monopoly money fun-bucks system. I’m unsure whether to recommend buying before the mistake is realised, or waiting to see if the real sale is just around the corner. The sale I’ve been waiting for since 2010. Hmm.

And yes, this is newsworthy primarily because of how newsworthy it shouldn’t be.