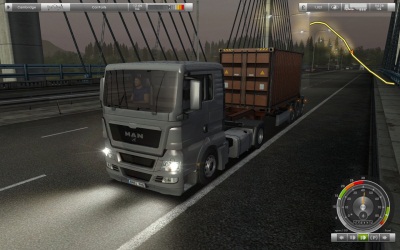 There is a breed of games out there which tend to get ignored by the mainstream games press, they are games you probably don’t even know exist unless you are one of those who still look for PC games on the highstreet. I am talking about games like UK Truck Simulator, Demolition Company, Driving Simulator 2011, Dive to the Titanic and a whole heap of similar, very niche titles.

The leading publisher of these titles in the UK is Excalibur Publishing which dominates this market but also handle UK retail publishing of more mainstream games with their latest release being the boxed version of Zombie Driver which has been available from Steam since 2009.

Some of these titles are not exactly great, Garden Simulator was a frankly appalling game, but others such as UK Truck Simulator (and its’ European based equivalents) and Demolition Company are most certainly enjoyable games, even if they lack some spit and polish. In the case of UK Truck Simulator there is an impressive mod (link) which brings the game to life with a whole host of improvements and additions.

These games may not be simulators in the same way that hardcore flight simulators are, but they provide an interesting alternative to traditional games market. Yes, you will find some stinkers when you look at this niche market, but the odd title here and there is worth checking out especially when the fans have had a chance to tinker and make some changes. The next time you are in GAME, take a look at what they have in the PC section and you will more than likely find these games, it is just a shame that they are often released at the £25 mark at retail, for a tenner they would be much more worthwhile.