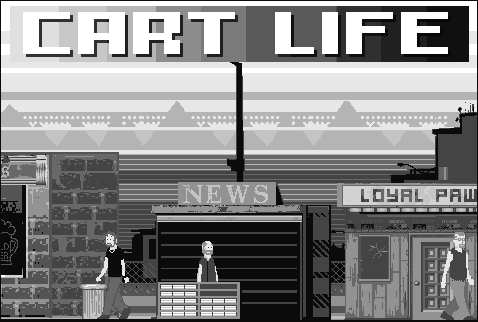 ALL THE PEOPLE, SO MANY PEOPLE, THEY ALL GO HAND IN HAND, HAND IN HAND THROUGH THEIR CART LIFE

Mr. Glembovski has gone missing. As game-changers go, it doesn’t exactly rank up with the Reaper invasion of Earth, or finding out you were Revan all along, but for Ukranian immigrant Andrus it’s an incredibly important event. For Mr. Glembovski is Andrus’ cat, and Mr. Glembovski is pretty much Andrus’ only friend.

Richard Hofmeier’s Cart Life is a simulation of running a small newspaper stand. Actually, that’s not entirely true. It’s a simulation of running the life of somebody running a newspaper stand. Their sleep schedule, their diet, their relationships, everything is down to you. Whether they excel and earn a profit or begin a long miserable spiral into debt lies entirely within your hands.

Playing Cart Life, you are given the option of playing one of three characters; Andrus, Melanie, and Vinny. Each character runs a different cart in a small american city, but it is the stories behind those jobs that make the game so unique. Andrus is a recent immigrant selling papers. He asks little more from life than to earn enough to provide food and accomodation for himself and his cat. Melanie’s tale follows her attempts to earn enough to prove to the courts she is capable of providing for her daughter. Each character is flawed in a different way, but they are people, not caricatures. Described rather blandly as ‘a retail simulation for Windows,’ Cart Life is a game about time management and prioritisation. Everything you do takes time, whether it’s conversing with your customers, restocking your papers or even browsing game menus, that clock is constantly ticking away. With rent to pay and a cat to feed, Andrus needs to start selling some papers, and fast.

Running the stand itself is both monotonous and repetitive. Simple actions like setting out the morning’s delivery are performed through a typing exercise that requires you to type out Andrus’ actions. Drop a letter or punctuation mark through a lapse in concentration, and you can easily find your narrow profit margin gone in a second after Andrus drops a paper in a puddle or accidentally tears the delivery.

Cart Life is not fun. It’s not supposed to be fun. If Cart Life was fun, then the streets of every major city would be thronged with small stalls, each seller whooping with joy before, during and after every purchase. What it is, is hard. It’s hard in the same way that life is hard, and it presents a realistic look at the mundane and at-times depressing side of life with all the consequences of the best Rogue-likes.

Eurogamer’s Christian Donlan recently conducted a fascinating interview with Richard Hofmeier, creator of Cart Life. You can find it here, and it’s definitely worth a read.