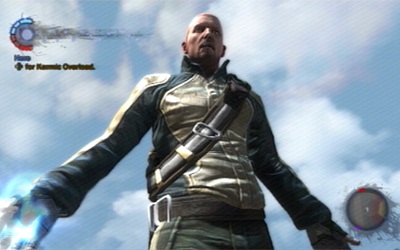 One of the things that set video games apart from other forms of media is the fact that you can control the main characters. As such we have a fondness for them; we hold them in a special place in our hearts. Some of course are better than others though, but how can we decide when our head is filled with emotions and nostalgia? Well worry not as this completely arbitrary competition will help you find out who the true heroes are. First up to battle are Cole Phelps from L.A. Noire and Cole MacGrath from the Infamous games.

Cole Phelps may not be the strongest or fastest of characters but there is one thing that sets him apart from most, his intellect. As a detective Phelps has to use his cunning insight on a daily basis. Only he has the ability to see that a theatre ticket in a dead woman’s handbag must mean that there is a gunfight going on there right now. True genius. Cole MacGrath can shoot lightening from his hands and that’s only for starters. He can also use his ability to control electricity to fire explosive blasts, shockwaves and to somehow glide. As long as he find something to charge him up MacGrath is a one-man thunderstorm. Intelligence v brute force, it’s a battle that has been played out in almost every game, movie and cartoon possible. Sadly in this case brute force wins, Phelps may be smart enough to know that he could negate MacGrath’s electricity easily with some sort of protective clothing, but his fine tastes in suits wouldn’t let him stoop so low.

Knee high walls, too low to vault, too high to simply stroll over. Phelps may be able to tell if a man is lying just by looking at his eyebrows but when faced with a few bricks stacked together he is helpless. The streets of L.A. would be completely crime free if Phelps could manage to overcome this weakness more often. Chain-link fences, MacGrath just doesn’t have the accuracy with his electric attacks to get past these conductive fences. Many a death has been caused by enemies standing, laughing behind these flimsy constructs. To add insult to injury MacGrath can’t even vault over them like his counterpart Phelps can. Knee high walls may be commonplace but at least Phelps is still able to get over them if he concentrates really hard and runs in a completely straight line at them. Conversely, MacGrath is doomed to be at the mercy of those fences for the rest of his days.

Like everyone else in Noire’s 1947 L.A. Phelps is an expert in all things sartorial. However, Phelps loses points for his disjointed body animations. It’s all well and good being fashionable, but when you look as if all your joints are attached to your body with thumb-tacks you need to change your priorities. MacGrath sports a yellow leather jacket and combat trousers. It’s a functionally stylish look to have in the urban wastelands, especially when compared to the bin bag wearing dust men. MacGrath’s real style comes from his preferred method of transportation though. By shooting electricity from his hands MacGrath can hover through the air. Anyone entering a room whilst providing his own special effects has to be considered pretty bad-ass. Looking good in one of the most stylish times of American history is one thing, but managing to do it after your city has been devastated by a bomb blast is another entirely. Phelps may have the greater fashion sense but as the band Senser said “style is something versatile, it’s in the way you move and the way you smile.” And MacGrath is certainly more stylish.

There you have it. Proven with science and logic. Clearly, the only Cole worthy of being your hero is the electric monstrosity from Infamous, Cole MacGrath. Come back next time to see who is the better* hero, Nathan Drake from Uncharted or Nathan “Rad” Spencer from Bionic Commando.

*Based on our random and completely irrelevant criteria.