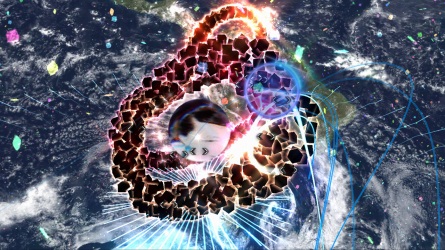 Imagine an ever changing world, full of bright colours and psychotropic imagery. A world that changes with every action. All the while trippy techno beats fill the air, constantly changing, mutating, evolving and reacting to every action. This is what Child of Eden provides.

Being the brainchild of Tetsuya Mizuguchi and the spiritual successor to Rez, Child of Eden was always going to be an anomaly in the gaming world and it has lived up to expectations diligently. It’s a game that eludes any attempt at genrefication but most closely resembles a rhythm shooter.

The gameplay is simplistic and very similar in style to Rez. Players must shoot anything that comes onto screen. With each shot fired and each enemy destroyed a note is played, adding to the music. Although the gameplay is basic to say the least it doesn’t affect Child of Eden. The visuals, audio and feel all take centre stage. The gameplay is purely just another tool to immerse the player, a method of interaction to pull you into its world, Eden. Eden is the name given by the game for the internet and the story is based on “purifying” viruses that are attempting to destroy Lumi, a girl being recreated in Eden. This story is only mentioned at the beginning of the game and quickly gets forgotten, it’s unnecessary. The only thing needed to keep you playing is the world of Eden.

A world so beautiful, so arresting that it’s almost impossible to take your eyes off it. Enemies and landscapes alike change within a blink of the eye to transport you to a different realm. The vibrant colours make the surreal visions seem almost tangible.

The fusion of music, visuals, touch and interaction enhances this feeling. Everything moves so fast, nothing makes any sense and every sense is barraged non-stop. Yet playing the game, you feel a strange clarity. Almost a oneness with the controller. No game has ever managed to craft such an overwhelming sensory experience and I doubt another ever will. The only thing that can be said against Child of Eden is that it isn’t a game. This statement is strengthened by Child of Eden’s length. A skilled player will be able to beat the game in only a few hours.

So is Child of Eden a game and if not then what is it, an interactive display, an emotional journey, an experiment in synaesthesia? I don’t know, but I do know that to many it won’t be considered a full-length game worthy of £40.

It’s something different though, an experience which words just can’t do justice. It may not be worth its price now but in time, when the price will inevitably drop, if you miss out on this experience then you will be missing one of the gems of the gaming world.

Note: This was reviewed on the Xbox 360 version of the game, without Kinect.