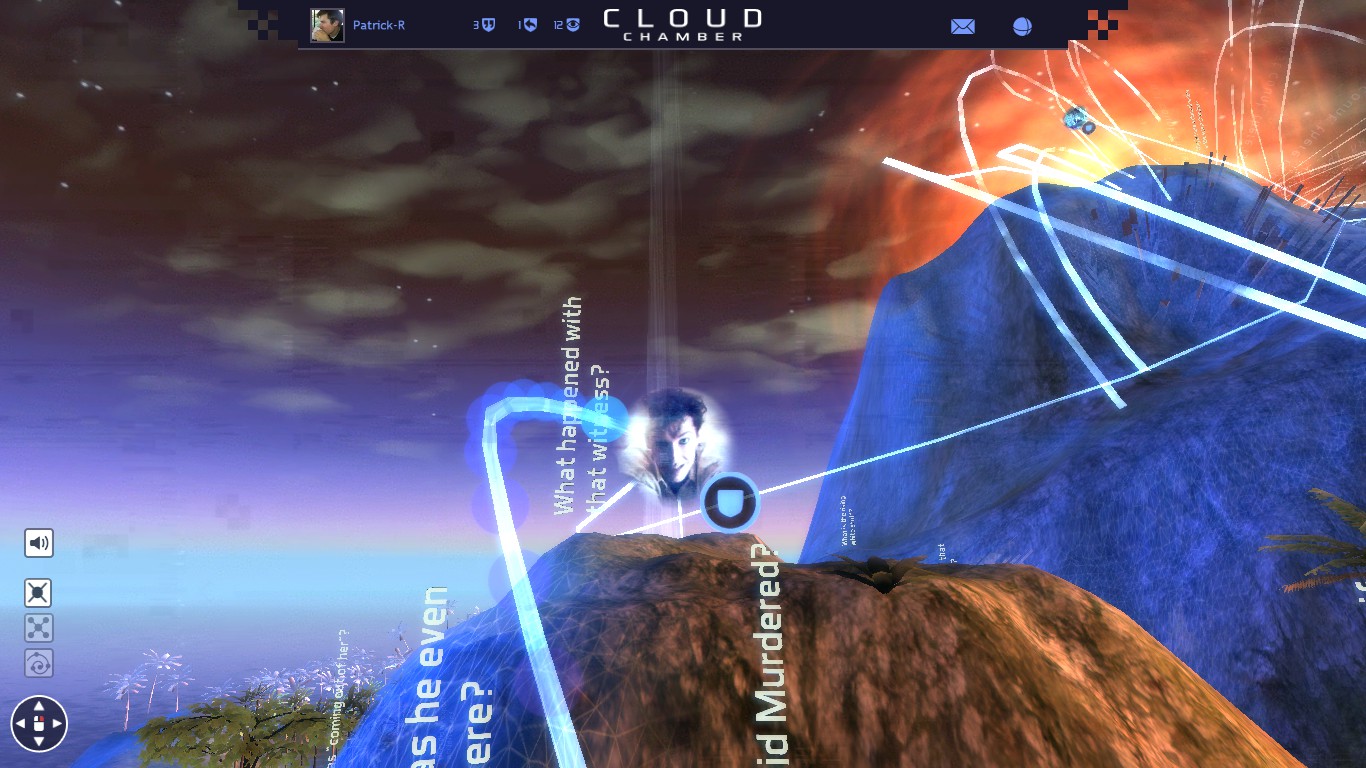 Cloud Chamber, an ARG-MMO hybrid by Danish studio Investigate North is due for release later this month, and Patrick has been taking a look at the feel of its strange world of science and mystery.

Cloud Chamber is Wikileaks The Game, if Julian Assange was into science and really, really liked trance music. It’s a kind of MMO adventure game centred around investigating a database that, in the game’s fiction, has been dumped on the web by a documentary maker in an effort to solve a murder and to investigate a mysterious signal from outer space.

It’s a disorienting journey into a tangled web, with only the blurb and the intro for guidance and the fellow players and trance music for company – it’s in media res by way of a rave.

Detailing too much about the narrative would spoil at least a part of this experience, but suffice to say the plot and setting are somewhere between Contact and State of Play. It’s competently acted and compelling enough in its own right for Cloud Chamber to be an interesting proposition. For the sake of mystery, however, I’ll stick to the mechanics.

Mechanically, Cloud Chamber is simplicity itself. A single question is posed over each section of the database, with a number of files spread across the area pick over and discuss. It’s the fundamental experience of the ARG – mysterious and defiantly oblique clues slowly explained through group discussion. Progress is marked by the amount of files viewed, the amount of sections traversed and by the impact you make in the discussions around each file. You view, analyse, debate and attempt to make sense of it all, to fit it all into your head. The complexity comes through this process of discovery and investigation – I’ve been going for a good few hours and I’ve yet to form anything beyond a basic understanding of what’s actually going on. There’s very little hand-holding – beyond the sequencing of files, the overarching mystery and the main question of each section there’s a great deal of freedom of interpretation. Veteran ARG players will certainly recognise certain devices – names, dates and places to search, photos to dissect and puzzles to work out. However, at least in the build I played, the core of the experience isn’t gated by much more than progression down the sequence of files. There are restricted files in some sections that don’t unlock until you’ve progressed far enough in later sections, but there’s more in common here with a disordered episode of the X-Files than other adventure games or even ARGs.

The lack of hand-holding and the constant flow of disparate scenes could have made Cloud Chamber a little bit too confusing, a little too dense, to be compelling. What pulled it all together for me, and kept me moving forwards and made me want to keep piecing together the mystery was the atmosphere. Resting somewhere between the frantic, off-kilter tone of a found footage film and the dour grimness of a Scandi-noir import, the atmosphere Cloud Chamber evoked made the trawl through the films and photos engaging and provided just enough urgency to keep me going. The music, comprised almost entirely of icy trance, gives everything a slightly otherworldly edge, adding to the feeling that you’ve intruded into some kind of cyber-noir tale. It was enough to draw me into the fiction. It must be said that a good portion of Cloud Chamber is hard to judge on preview. Much of the game is meant to rely to discussion and debate in a kind of pseudo-Facebook, and discussion certainly exists in the preview build that I played. However, whether or not the system of discussion works on release isn’t easy to judge, although some early signs of debate are encouraging.

Cloud Chamber is interesting. Above all else, it is interesting. I don’t mean to damn with faint praise, as games often aren’t interesting at all. From what I’ve played, I’ve been driven on by a desire to know more and to work how things fit together. It’s a detective game in a manner divorced from the point-and-click or find the object types of detective games that already exist, one where you’ve got a hope of making some deductions of your own. That itself is interesting enough. How the MMO aspects of the game will work out is yet to be seen, but if you are looking for a different sort of adventure game, it’s definitely worth a look.

Cloud Chamber will be released in late July on Steam.