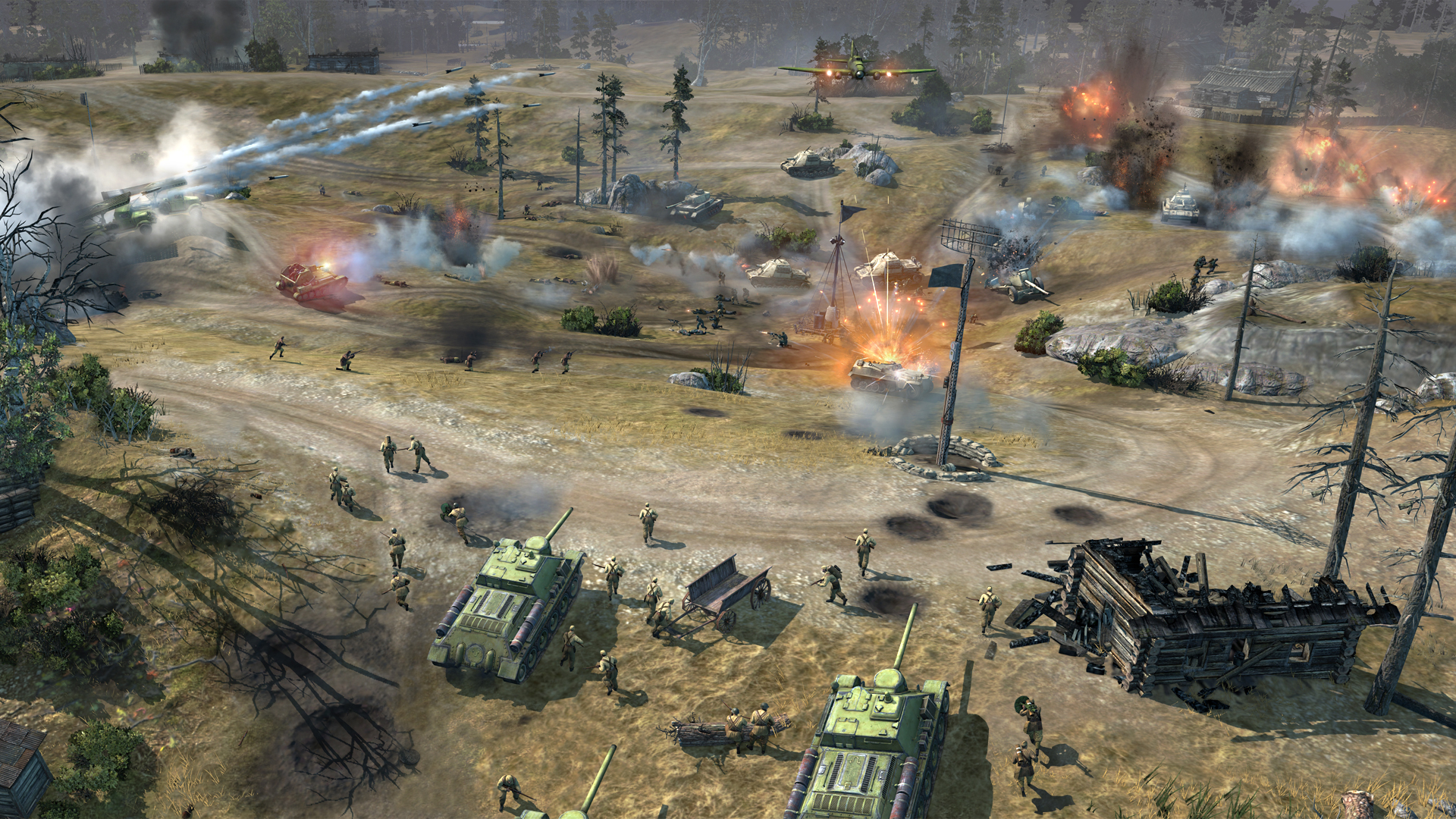 Wow. This game is going to be fun. As I write I’ve just had to drag myself away from playing another game of Company of Heroes 2 as I know that I will spend my whole day playing it otherwise. The pull of more wintery action is strong. I see bright things ahead for Company of Heroes 2, even just based on a couple of skirmishes battles against the AI. If you’re looking for some RTS action which isn’t full of Zerg, then this follow up to the Western Front set classic might be what you need.

As I said, I’ve only had a few AI battles so far as I try to figure my way around things but I am quite blown away. I played a campaign mission at the Eurogamer Expo last year, but getting to play around outside of the boundaries of a singleplayer mission is quite joyous.

My first battle didn’t go down quite as I hoped, I pitted myself in a one vs one match against a Standard difficulty AI, I was Soviet taking on the German machine. It is safe to say that I go my arse handed to me on a plate. It didn’t help that I spent quite a bit of time getting used to the UI and the various options on offer at different buildings and units. Also, I was left with a bit of a StarCraft II mentality and immediately set about creating Engineers and slapping down buildings without realising that I needed to actually capture Supply Points and Victory Points in order to have a chance of winning.

By the time I got around to creating a squad of conscripts I had lost out on two Victory Points and just about managed to send my men to the remaining point. After a short fire-fight I was in control of the sector, but then artillery or mortars started raining down on my troops who I quickly pulled out of the area. In the midst of all this a blizzard had whipped up rendering me virtually blind and too scared to move my units away from various fires littering the battlefield. Needless to say, the AI made quick work of me here.

I regrouped, took stock of what went down and realised I needed to play the game properly, take control of sectors and constantly build new units. A two on two battle with AI was started on another snowy map, this time with a frozen river for company. I made the decisive move to secure the eastern flank and victory point while letting my ally worry about the two central positions while I built up my forces. After surviving a few blizzards and having created some light armour, I took some units on a flanking move to the south. This proved to me an error as a main enemy base was hiding in that corner. I pulled those troops back to hold the current positions from the regular enemy attacks and invested in some more light armour.

I brought my personnel carriers down along with a scout car and crossed the river to lend my ally support at a heavily contested Victory Point. Taking wheeled vehicles across the ice was amusing. Watching these beasts of war slide around without any grip is quite a sight, I got them into the battle and brought some heavier armour from the other side. These new units were tracked and coped fine on the ice before proving their worth in battle. The village was decimated, but we won the battle.

This morning saw the best battle yet. Another two on two match with the AI, but this time things went down on a map free of snow and a very strategic Victory Point in the middle of the map. My initial moves went well, helping secure a Victory Point on my side of the river and the key point just past a bridge. Things were progressing well until the centre point fell, from here on there was a constant bloody battle for this key Victory Point. Trees were decimated, a machine-gun emplacement my engineers built was blasted away by mortar fire and the ground ended up full of craters and later on husks of my armour.

Fallen machine guns and anti-tank cannons were abandoned everywhere and I kept sending units into the meat-grinder all the while ignoring the fact that my southern flank had been seemingly abducted by aliens as all the souther points were in the hands of the enemy. Leaving I central point to my ally I loaded up a half-track with a some Grenadiers and took back my property and Victory Point. Mission successful I left my conquering squad there, resolving to keep a closer eye on their status. After moving a tank and some infantry back to the central point to support my ally, things seemed to get back under control with my infantry taking control of an abandoned anti-tank cannon helping to keep the sector secure.

I turned my attention back to my souther sector in time to see my half-track blowing up and my two infantry squads left facing down a Soviet tank destroyer. They were relatively safe from its attacks, and a game of seek and destroy ensued. I sent my units following this lumbering tank, micro-managing them both as they used their Panzerfausts to take it down. It finally gave up the ghost after losing its main gun and engine control. The destruction of this enemy armour coincided with overall victory.

What has become apparent to me quite quickly is the hidden depth to the game. There is so much to do on the battlefield and so much happens with cover being destroyed and created that you can’t rely on your units being safe at all times. There are also different command paths to take during a game which provide you with various passive and active bonuses. These can be customised and upgraded as you gain ranks and experience points after matches. I’m sure that your choice of upgrade paths will influence play styles in the more competitive online matches.

For now I will say that Company of Heroes 2 is looking extremely fine and will be a mighty impressive game when released this summer. One last note, my screen-grabs really don’t do the game justice, it looks great. The header image though is from SEGA.