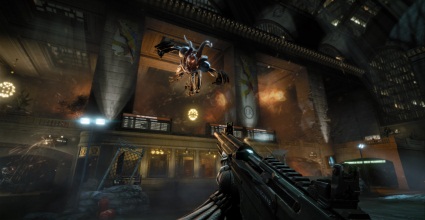 Released in 2007 the original Crysis was the pinnacle of visual excellence in videogames, requiring a ridiculously high-end nuclear powered PC to even run it, let alone render the world that Crytek had crafted in all its pure, unconstrained glory. And of course, prior to release, the publicity and promise of bar-pushing visuals was naturally accompanied by the levels of pre-release hype usually reserved for the likes of Halo and Grand Theft Auto. Whether Crysis’ strong sales and critical acclaim should be accredited solely to its high production values or not is maybe something that is still open for debate, but the public was eager for more and the rumours quickly started flying that Crytek was planning on bringing Crysis to consoles, which of course was impossible. Thus Crysis remained a PC exclusive and rightly so; any attempts to port the game over to consoles would have surely resulted in an inferior and watered-down version of the game PC gamers had previously enjoyed.

Four years on and we have Crysis 2, which has been built (or achieved, as the game gleefully takes far too much pride in informing the player every time they boot it up) using Crytek’s new engine, CryEngine 3, which was supposedly created with consoles in mind. Now, I won’t even begin to pretend that I understand all the technical wizardry (possibly involving elves) that goes on within CryEngine 3, but it would be remiss of me if I failed to mention that Crysis 2 is easily the finest looking FPS I’ve ever played on Xbox 360; dust lingers in the air, light filters through rubble and foliage while casting realistic-looking shadows upon the beautifully rendered environments of war-torn New York City. Some dodgy facial animation aside, the entire game looks absolutely incredible to the point where at certain spots I found it hard to believe that I was actually playing Crysis 2 on a console that’s been knocking around for 5 years as opposed to a uranium enriched PC. But a game having great visuals doesn’t mean anything if the game isn’t up to much when you play it. Lucky then that Crysis 2 mostly excels when you start to play. It’s naturally got all the characteristics of the modern FPS – regenerative health, aiming down iron-sights, etc – but it also introduces console gamers to the Nanosuit, which is the series trademark feature. Nanosuit abilities are split into three areas and each one is quickly and easily accessible via their own dedicated buttons. Agility grants you increased speed and jumping height; Armour restricts your movement speed but allows you to absorb greater amounts of damage; while Stealth makes you practically invisible, allowing you to perform stealth kills, sneak past enemies or scope out areas without enemies immediately gunning for you. Armour, Stealth and Agility are rounded off nicely by a tactical visor that, when activated, will point out sniping spots, ammo and weapon caches, flanking opportunities and other strategic options for you to take advantage of. Oh, and thermal vision, which is always good, right?

So whether you’re the type of player who likes to go in all-guns blazing and shoot people in the face or you prefer to take a silent, skilful and methodical approach to killing things, having these abilities at your fingertips means that you’re suitably equipped to tackle almost any situation in whatever way you see fit. Problems arise early on when pacing problems rear their ugly head. For the most part the first half of the game is downright boring because the human enemy AI is functional at best – rarely will they try to flank you or do anything other than either stubbornly hide behind cover or rush you in a suicidal attempt to take you down – and aside from a brief vehicle section almost nothing interesting happens. It’s only at around the halfway point, when the Ceph – the aliens in the game – start showing up in greater numbers and varieties that the game kicks it up a few notches and becomes thrilling and challenging to play. The Ceph are uncannily agile and (wonderfully animated) brutal opponents and if you don’t make clever use of the Nanosuit they’ll wipe you out in an instant. It’s also from this point on that the game will treat you to some truly staggering set-pieces both in terms of visual panache and the downright jaw-dropping “what the hell?!” stuff that goes down. The campaign clocks in at somewhere around the 10-hour mark and when that’s done and dusted there is also a competitive multiplayer component in Crysis 2 that unfortunately doesn’t feel different enough from the other FPS’s on the market to truly stand out. As is par for the course in multiplayer FPS’s these days it gives players the chance to customise their characters and unlock new weapons, weapon mods and perks in the form of Nanosuit upgrades. It sits uncomfortably between Halo and Call of Duty, leaning further towards the latter, with fluky grenade tosses and inhuman feats of iron-sights accuracy taking prevalence and the Nanosuit upgrades failing to impact upon or shake up proceedings enough to allow Crysis 2 to reach the dizzying heights of either of those well-established franchises. And this is a real shame because had a bit more focus been put on the Nanosuit abilities then Crysis 2 could have stood out as a refreshingly different alternative.

Crysis 2 – for me at least – is a difficult game to slap a definitive rating on. On the one hand, the multiplayer lacks its own identity and poor pacing during the campaign makes for a lacklustre first half… but it controls tightly, gives players a wealth of opportunities to experiment and make use of the Nanosuit abilities to play the game how they want to and of course it all looks absolutely stunning. Overall, I enjoyed playing through Crysis 2; as a technical achievement there is no match for it on the Xbox 360 and when it’s good it’s very good, but you’ll need to persevere through too many hours of monotony and tedium before you get there.