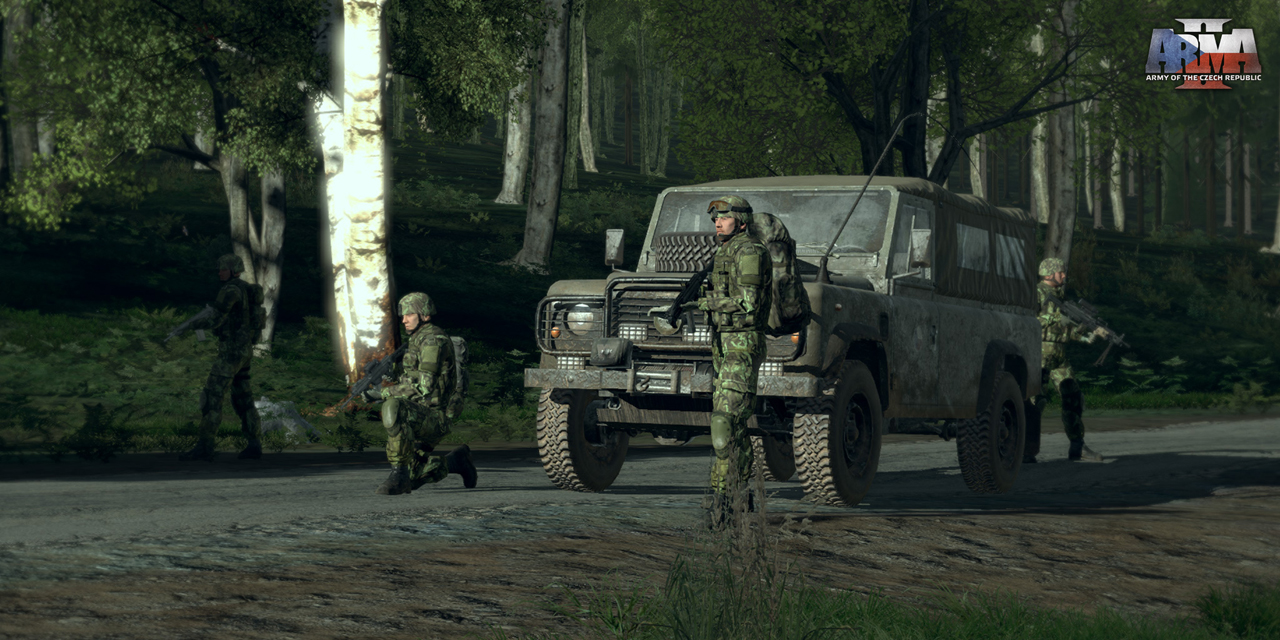 Before the inevitable zombie plague swept the planet, ArmA 2 was a place of peace and security. Ok, perhaps that’s not altogether true, but there were definitely less dead people. Less dead people still wandering about, that is. Beyond the mad success of its mod-child, DayZ, the ArmA franchise has long existed as a niche product. Foregoing the CoD approach in favour of long walks followed by even longer periods of being dead, ArmA has always valued realism over accessibility. Now, with ArmA 3 rapidly approaching from the front, a surprise flank attack from ArmA 2 has been released on Steam in the form of the Army of the Czech Republic DLC.

Since the disappointingly mediocre additions of the Private Military Corp addon, Bohemia has certainly stepped up a gear when it comes to new content. With two new maps, over a dozen new vehicles, a contingent of new unit types and some interesting new ideas, it’s a heftier addition to the ArmA 2 DLC collection. Featuring the usual authentic units, vehicles, weapons, and environments, it’s all designed to recreate the feel of being in the Czech Armed Forces as they experience different theaters of war through a 15 mission campaign.

‘But why the Czech Republic?’ I hear you cry. It may initially seem like an odd choice, but then Bohemia Interactive are based there.  Now with their home forces under scrutiny, it’s clear they’ve put a great deal of love and attention into this addition to the ArmA ranks.

Bringing fifteen new missions to the table in a new single-player campaign, the ACR expansion is far heftier than the previous PMC  fare. You’ll be sent on a variety of missions ranging from hunting down war criminals to quashing uppity rebel forces. Equally, in addition to the usual military fare, ACR adds a couple of experimental missions to its single player list. In an interesting one, a flood covers the landscape in several feet of water, tasking you with clearing the submerged village of survivors. It’s an interesting reminder that the military’s job is not always one of violence, an idea that I would love to see the ArmA community play with further.

The tanks of the Czech military are based on older soviet designs, meaning some people may be disappointed to find them to be simple reskins of existing ArmA models. However, with Bohemia never being the type to put their game ahead of accuracy, it’s a sacrifice you’ll just have to accept.

Pilots also will love the new nimble aircraft – with fast response times and a small profile they can dodge the heaviest of anti-air weapons. What this does mean, however, is that non-pilots like me will probably stay airborne for about ten seconds before slamming into a mountain. They do look pretty though, and with several variants available you’ll find one for every conceivable occasion.

The two new landscapes on offer are heavily forested, almost to the point where you could conceivably criticise them for a lack of variety. Low end PCs will struggle with large battles concealed within the trees, but after the yellow dusty landscapes of Takistan, I’ve been eager to return to greener climes. In size, the larger of the two is approximately twice the size of ArmA-2’s native Utes, with the smaller variant more suited to small-scale multiplayer scuffles. Nothing too mind-blowing, but after being disappointed with PMC’s microscopic map, it’s nice to see a little more energy has been expended on the landscape this time round.

It’s easy to dismiss this addon as more of the same, and in many ways you’d be right. It doesn’t provide much in the way of new game modes or unique objects, but for those like me who treat ArmA as a plastic army men play set for grown-ups, it’s always nice to expand what’s on offer. As a final addition to the collection, it’s clear that ArmA 2 intends to gracefully slide into retirement.