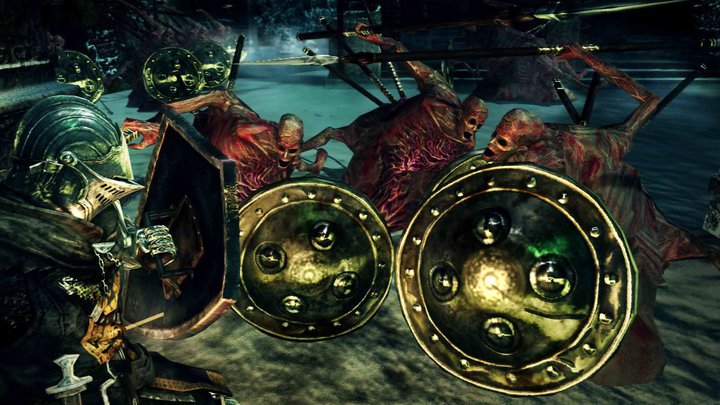 Dark Souls is not the kind of game you can slap a score on and send people on their merry little way. For me, Dark Souls is something beautiful; I feel richer for having played it and having lived through the wretched lows and giddy highs. For others it is a short-lived exploration of extreme frustration, akin to battering one’s head against the wall. The game’s slogan ‘Prepare to die’ isn’t mocking you, it isn’t challenging you to do otherwise, it’s explaining how you play the game. You die, you learn and you grow.

Dark Souls is quite a difficult game you see, and people who run in without really knowing what they’re getting themselves into quite simply won’t understand how to play it. Primarily it’s a hack and slash game, backed up with a complex statistics system of percentages, incremental improvements and diminishing returns. But in many ways it doesn’t play like a modern game at all; mechanics are explained in the vaguest of terms, combat is slow and death is frequent and often frustrating. Consequently, you have to learn how to play it – unless you’ve played Demon Souls, to which Dark is the spiritual successor. This means taking your time, inching forward through the grim and dangerous environments, approaching each new enemy with caution. As you play you’ll gather souls; used for levelling up and upgrading your equipment, but equally as important – you as a player level-up. You learn how to deal with enemies and situations, you’ll come to understand that patience is key and as your timing and evasion becomes more precise you’ll grow from a nervous neophyte to grizzled veteran. Combat is methodical and dangerous (though with plenty of opportunity for flair, with counters and back-stabs). Charging in recklessly with a two-handed sword, might feel heroic and initially might even yield success, but at some point you’ll get hit. That’s the point where you discover being hit is not a good idea – as your health bar is cut in half and you find yourself desperately scrambling backwards to use an Estus flask (healing potion), your undead opponent tries to capitalise on your weakness. You roll backwards, evading the death blow, but your movement attracts the attention of another foe nearby and now you have two vicious skeletons moving toward you ominously, their savage red eyes reflecting their intent. You grab the shield from your back, holding it out in front of you, as you step from left to right, trying to find the angle that favours you. Skeleton number One lets out a roar and slashes at you with his blade, it deflects harmlessly off your raised shield and you consider a quick counter attack. Skeleton Two’s close proximity and your diminished stamina convince you otherwise. Instead you take a step backwards and let your shield down to recover for the next onslaught. Skeleton Two surges forward and attempts to impale you with an attack you recognise – a vicious lunge. You time the parry perfectly, swatting his blade away with your shield and perform the riposte, violently burying your sword in his ribcage, shattering the skeleton. You pull up your shield once more and turn back to Skeleton One. He comes at you with a combination of two slashes, and you roll behind him, slipping your blade between his shoulder-blades as he shatters into a pile of dry bone and dull steel. You take a moment to heal before resuming the standard exploration position. Shield up, you edge forwards toward the white globe on the ground signifying precious loot. You claim your treasure – a new spear – as the pile of bones on the ground just to your left reforms into a skeleton three times the size of those you just slew and with a blade as long as you are. For a brief moment, you consider running. But part of you wonders; ‘Just how many souls can I get from taking this joker out?’. You set your jaw in grim determination, preparing for battle. That is the essence of the Dark Souls experience; risk versus reward, gruelling combat and the knowledge that no matter how many enemies you’ve slain, bigger, tougher ones lie in wait. Dark Souls’ biggest change from it’s predecessor is that it eschews the hub-level approach, instead giving us a seamless open-world to explore. The world retains a Gothic fantasy feel, while taking you through some remarkable environments. My personal favourite is a hidden area known as Ash Lake. You crawl out of a large hollow tree into this area and a stirring orchestral number, both haunting and ethereal greets you. On the horizon, you are made to bear witness to your tiny insignificance as hundreds of giant trees stretch into the mists all around. Stopping to admire the beauty is however, a perilous choice to make. The lake to your left contains a hungry looking Hydra, it’s eight heads snapping viciously as it launches a flurry of water jets toward you. The amazing environments combined with the enemy design and sparse NPC dialogue tell a tale of a world drained of all life as enroaching chaos and decay consume. It all sounds pretty grim (and it is), but it’s a setting which seems to make your heroism into an act of defiance so unexpected the game itself can scarcely believe it. My favourite NPC of the game is a man you meet just outside the tutorial area, who has forgotten hope. He mocks your chances of survival and with each success he grows more despondent, jealous that you have gained strength, where he gave in to weakness. I think he’s meant to be a metaphor for the people who slam their controller down in frustration and walk away from the game. The biggest problem in my time with Dark Souls was the multi-player. On the surface it sounds like a unique proposition. You can leave messages for other players on their doomed journey upon the ground, be that a tip on how to beat the next challenge, or a cruel jape sending them to their death. You can also summon the phantoms of other players to your world, for co-op play. Your goal in co-op is to take down the area boss together, but it doesn’t conform to our expectations of integrated voice-chat and chat functionality in modern gaming. Communication is purposefully limited to a few vague gestures and it’s totally in keeping with the setting – these players are echoes of other heroes who tried and perhaps failed in the same quest you now undertake, to have you bantering away with each other would just feel wrong. Finally there are invasions, this is where hostile phantoms are able to invade other players worlds and attempt to slay them for various rewards – usually determined by which ‘Covenant’ you are a member of. Covenants are factional affiliations, some geared towards assisting other players, others to slaying them and harvesting their souls. The online ideas in play here are an admirable attempt to do something different (in keeping with the rest of the game), but at the time of writing I am often unable to connect to other players and it’s a source of frustration that this feature is so hit and miss. Even when you are able to connect to others, the balance of weapons and items for the PvP aspects don’t appear to be finely balanced and there are an abundance of cheesy builds and cheap tactics.

If you can face a sturdy challenge and have the patience to learn from your mistakes, Dark Souls is a game that is outright better than every other release so far this year (Portal 2 is a possible exception). It’s a captivating experience, that grabs you forcefully and drags you into its brooding landscape, daring you to fly in the face of overwhelming odds. In many games you save the world as part of the narrative, but the heroism credited to you feels unearned. Here, every victory is to be savoured, every gigantic boss you fell feels worthy of legend. If you dismiss this game because you’re afraid of failure, you’re missing the point. The victories you truly earn are the sweetest of all and few games come close to the sense of soaring triumph that success in Dark Souls brings.