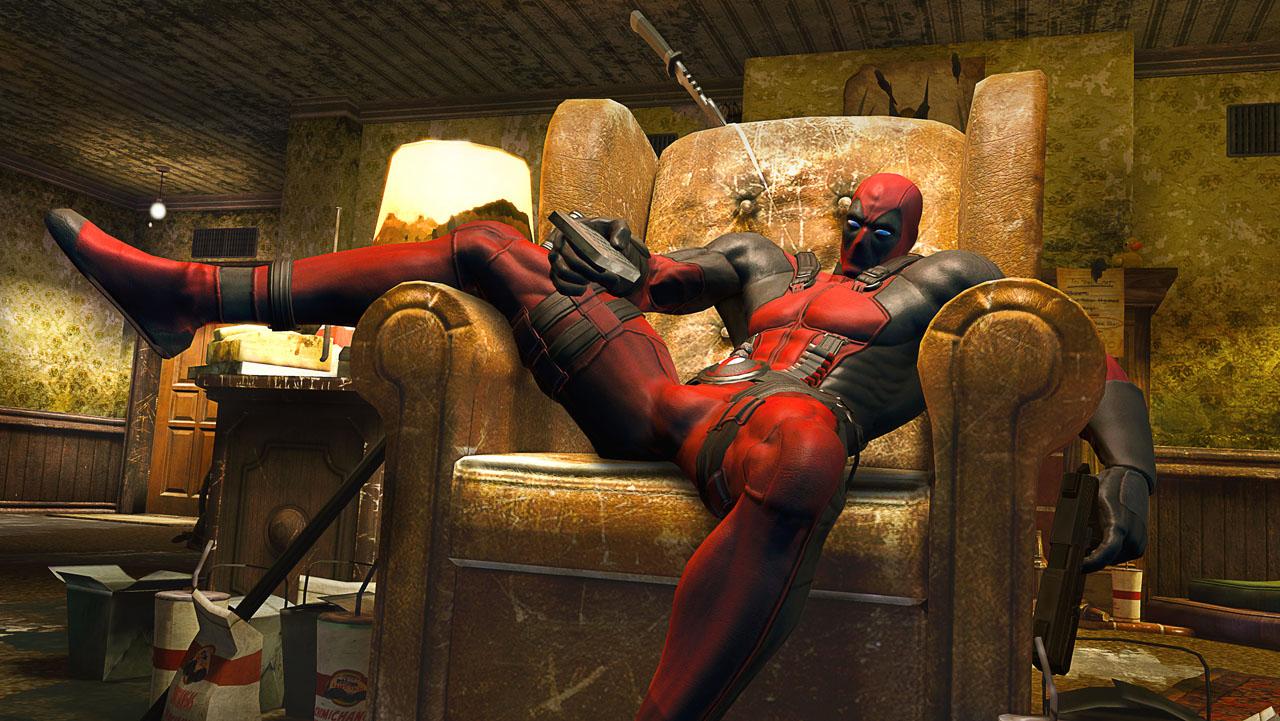 Deadpool is a game that does what it says on the tin. By ‘tin’ of course I mean case, and by ‘what it says’ I mean what Deadpool says… that’s right, he quotes himself on the case of his own game. It’s this self styled egotism that sets the standard for a large portion of the campaign.

As a character Deadpool is a bit like Marmite in the sense that you will either love his over the top, whimsical narration of his own game or you will detest his immature humour and big headedness. If you already know about Deadpool‘s outlook on the world you will largely know what to expect from this, otherwise you might not be able to overlook the childish and immature narrative and comedy that is peppered throughout the story. It never relents either, so if immaturity is something that grates on you quickly then you will find no comfort here, however if you fondly remember the times you used to laugh at inflatable women and jokes about celebrities then this will be right up your street.

The combat is surprisingly solid for a game that doesn’t take itself seriously and consists of a melee/shooting mix, using combos to build up DP points (Deadpool‘s self styled version of XP) and further bonuses. These points can then be spent on upgrading your characters health, abilities and weapons, which in turn allows you to build up bigger combos and earn more DP, I’m sure you see where this is going. The weapons on offer are not all that varied with three melee type weapons, four guns and four types of grenade. Whilst upgrading and changing weapons around can be fun it’s entirely feasible to stick with the starting weapons for the duration of the game unless played on the hardest difficulty.

There is also a small platforming element to Deadpool. When navigating certain chapters you are expected to make your way through areas that cover various altitudes, or jump across lakes and chasms littered with platforms. Not much emphasis is put on this though as these areas are generally cluttered with enemies and other objectives. Platforming is not your focal point when you also happen to be fighting off enemies, dodging helicopter fire and collecting power-ups and sometimes even all of them at the same time. This does however make for very enjoyable gameplay when set pieces like this are in full swing.

Graphically and musically this game falls under the fairly standard category. A meaty guitar riff dominates the start up screen but after that I don’t recall anything audibly memorable aside from Deadpool himself. Graphically there isn’t really anything that makes me stop in awe, whilst at the same time nothing fundamentally wrong with design or modelling. Enemy AI also falls into the neither here nor there section. Although there are occasionally some enemy types that are really tricky to deal with, most of the time it’s the sheer number you encounter that is the daunting part.

Clocking in at around 7-8 hours on veteran difficulty Deadpool is not the most extensive, but in my opinion this length is just right for the type of game it is. Any longer and the combat would begin to get tired and repetitive, the tomfoolery irritating and the story boring, and any extra playtime would be at the detriment of the gameplay itself. Gameplay can be extended by the challenge mode which uses eight areas from the campaign and pits you against increasingly harder waves of enemies, with an unlimited wave mode unlocked at the end of each stage.

Personally I think this is a great little game packed with silly and dirty jokes, a strong lead character and enjoyable gameplay. This won’t be the case across the board due to the humour style and possible repetitive gameplay. Factoring cost into the equation of value for money also lowers my final scoring for the game. At £30-ish Deadpool is not the most expensive release, but with only a 7-8 hour campaign that has little replay value and a challenge mode, there’s not a lot to sink your teeth into once that first playthrough ends.

For anyone who has yet to experience Deadpool and want’s to know more, just think of what the Mask films would be like if they were rated 18 and you will have a pretty good idea of what to expect here. Just don’t play it when your mum is around as things can often turn off the wall crazy or downright rude, in the funniest way possible.

Review based on a copy provided by High Moon Studios.