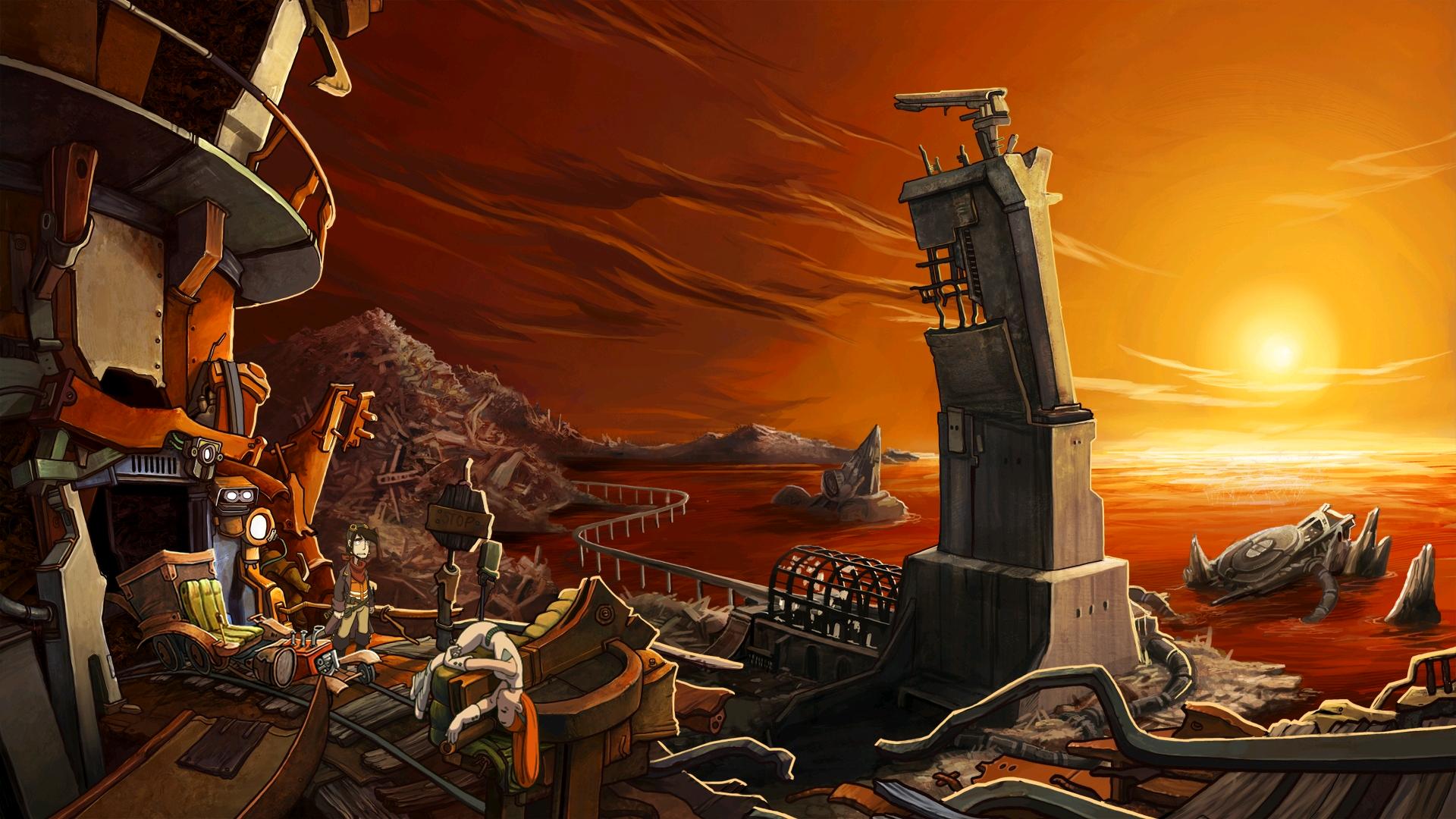 Rufus longs to leave the junkyards of Deponia, he longs for a better life in an unknown land, filled with riches and luxury. But most of all, he longs to get away from his nagging ex-girlfriend Toni and the town of Kuvaq where he has become known, for some very good reasons, as the local idiot. Brimming with witty humour, a beautiful art style and some extremely tricky puzzles, Deponia is not a game for the defeatists. Before playing this game make sure you have firmly rammed your thinking cap on your head, glued it down and stapled it on just for safe measure.

Gameplay can at times be a little slow in Deponia, but that probably has more to do with my inexperience when it comes to point and click style puzzles than the story and narrative. The puzzles themselves are tough but in a very good way, a way that makes you scratch your head and then fist pump when you finally work out the solution. Many of the explanations are not straight forward, obvious or at times even logical, but it’s during these moments that some of Deponia’s best humour shines through. One such moment occurs near the start of the game, let me set the scene: Rufus is packing his suitcase, ready for an adventure to an unknown land. Included in the list of items you need for survival are socks, food, a toothbrush and bolt cutters, because you never know when they might come in handy. Upon attempting to pack your toothbrush, it escapes… and no that’s not a typo. It actually jumps out of your hands and hides in the darkest corner of the room out of your reach. What follows is a hilarious and completely illogical series of events in which you attempt to re-capture the toothbrush before you set off on your journey. It’s these moments of random hilarity, rivalling Douglas Adams ‘Don’t forget your towel’ style of humour, that really set the game apart from any other point and click I’ve played before. And while the puzzle solving techniques can be a little off beat at times, there is always the option to skip them if you are well and truly stuck.

Another shining point is the terrific artistic style visible throughout the game. The foregrounds are intricate and cleverly interactive and the hand painted backgrounds are charming in most cases, compelling me to take plenty of screenshots, and often just stop what I’m doing entirely to take a good look at the artists handy work. The characters are also well designed and humorous. All it can take is a certain facial expression at the right moment from Rufus or another character to bring out a chuckle. The storyline is engaging and its characters ultimately interesting and really rather comical. Without spoiling too much I’ll say that while your aims and direction in the game is well established the background and reasoning behind it all is not so clear. For example questions such as ‘where did the Argonons come from?’ and ‘what happened to Deponia to turn it into a wasteland?’ are never answered. This is only part one of a planned three-part game however, so there is still time for concerns like this to be explained in the future episodes. It would be handy to have some dialogue or text to read that would cover things like this and in doing so would provide a more believable world.

While Deponia may suffer from a few hindrances such as a slow start and unusual puzzle solving logic, its many high points make these easy to overlook. By the end of the game I was fully invested in Rufus and his tragic story of love and adventure, the supporting characters and the world in which they all inhabit. It also left me asking many questions which will hopefully be answered in part two.