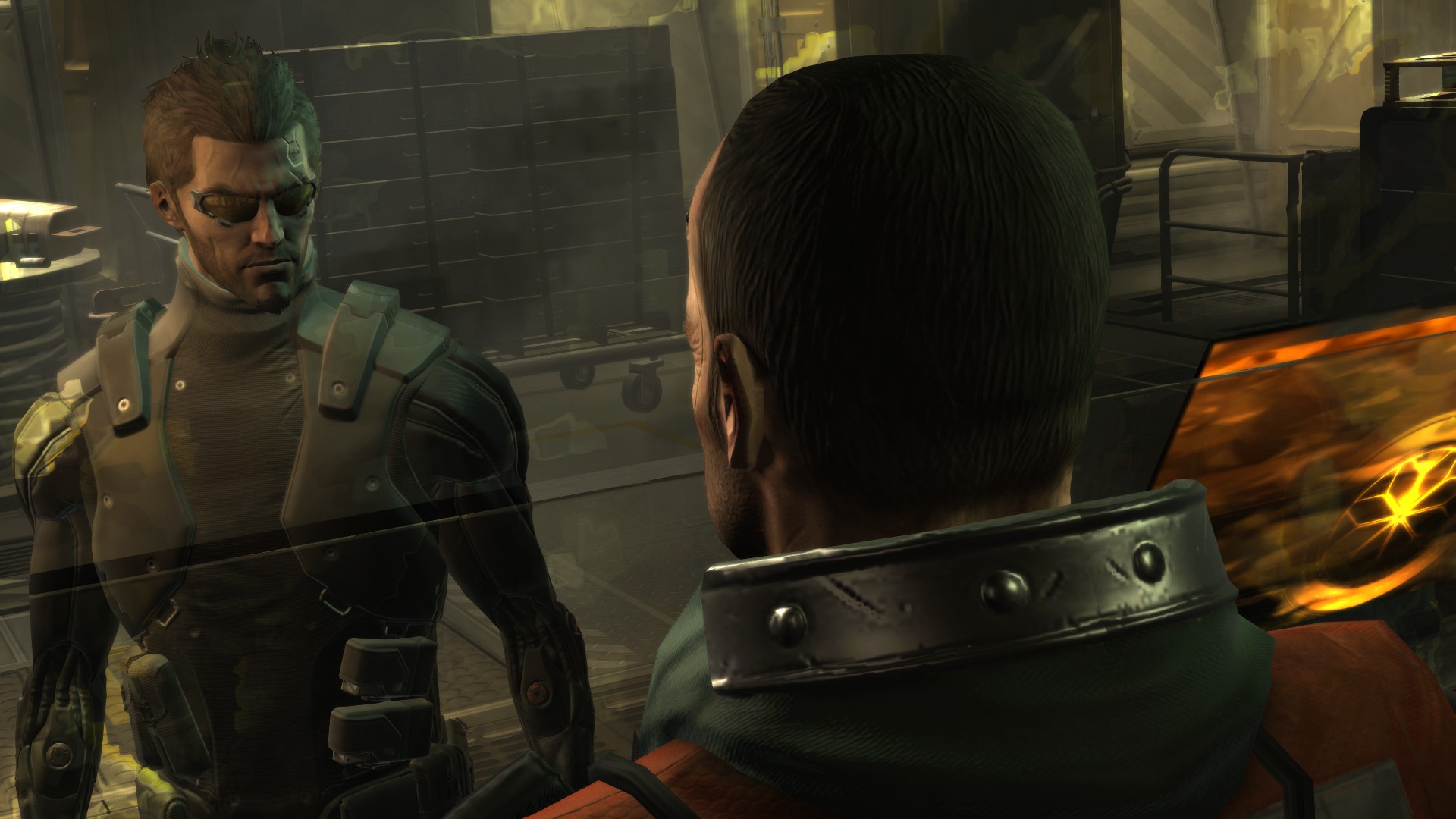 Two months on from Deus Ex: Human Revolution and the dust has settled. Wisely pre-empting the ‘every man for himself’ nature of the autumn shooter season, Human Revolution is now a game rapidly depreciating in price that is still very much worthy of its Reticule Red Mist review. And it wouldn’t be a modern action game if there wasn’t a healthy dose of DLC to make up the ‘then and now’ difference in retail price. To wit: The Missing Link.

The ‘Missing Link’ of the title refers to a week you never knew you lost in the main game. Nearing the climax of the adventure, Jensen causes a diversion in Hengsha’s Belltower dock, slips into a cryogenic pod and wakes up in Singapore having ‘slipped off the radar’ for a few days. For all the player of Human Revolution knows, Jensen has been asleep in his tube for the entire period. The Missing Link, has other ideas: Jensen’s sleeper-pod plan actually ends unceremoniously when Belltower pull him from his pod, disable his augmentations and restrain him in a cell.

It’s not the most encouraging of starts, certainly. The sleeper-pod sequence stood out like a sore thumb in the game, and not because it necessarily shouted ‘MISSING REEL GOES HERE’ in the quite infamous way of the Assassin’s Creed 2 DLCs. It just seemed daft: why was immobilising yourself in a tube the best method of infiltration available to you? Popping DLC in this space just raises more questions that can never be satisfactorily answered. Most obviously there’s the question of why Jensen never mentions the events of The Missing Link to anyone. But even the fact that you know the game must at one point contrive a way of getting you to climb back into a cryo-tube hangs over the experience.

The ‘Missing Link’ title was obviously chosen in reference to the human evolutionary theme so central to the new Deus Ex discourse, but it seems to me a rather unfortunate choice. Unlike the sometimes elusive evidence of humanity’s ancestors, The Missing Link just doesn’t seem like a significant find. In fact, it seems specifically engineered to be as inconsequential as possible. It’s not like you can blame Eidos Montreal for this: consumers typically have nothing less than utter disdain for developers who place critical story in paid-for downloadable content. But after the significance of a product like Deus Ex: Human Revolution, it wasn’t unreasonable to suspect this developer to put out a DLC that actually matters.

Ok, so there’s interesting canonical information to glean from The Missing Link. We learn a little more about Belltower’s role in the global conspiracy, get more insight into a major technology from the main game and a little more information on the global situation. There’s also a cameo from a young version of a Deus Ex character, a nod that would have been more effective if the main game hadn’t systematically name dropped most of the original cast. In fact, I’m calling it: Australia keeps popping up on the fringes of the Human Revolution storyline. A young Isaac the bartender will have a lemonade stand in the slums of Neo-Sydney (“Rettetrik?! And you beleeve it?!”).

It’s all welcome detail, but it’s all clearly from the writer’s backup pad of ideas. Apparently, one detail ties in with the Icarus Effect novel, both suggesting that the revived franchise might develop to contain more of these details and cementing the nagging sense that The Missing Link is giving us the Deus Ex B-story: the experience that is essential only for the hardest of the hardcore fans, and merely diverting for the majority.

With all this said, anyone with a passing interest in the series knows that an inferior Deus Ex adventure is still going to be worthy of consideration. Very little is added to Human Revolution‘s gameplay: finding space for it in the already crowded system of options available to the skilled player would be a thankless task anyway. On the contrary, the DLC sets out to make restricting these systems a ‘new’ type of gameplay in itself. You get to build a new Adam Jensen from scratch, to which you most logically respond by building one of the Adam Jensens you didn’t play in the main game.

You’ll be sneaking about, snapping necks, firing guns, throwing crates and / or hacking turrets and the experience will stand-up, regardless of the necessity of it all. Secondary missions and achievements give you some decent reasons for exploring every last inch of the maps, and these typically find uses for augmentations that could so easily have been redundant (the ‘social’ aug is one example you’d expect to see neglected, yet the significant number of conversations that cater to it don’t feel forced).

Deus Ex: Human Revolution has also set a similar impressive baseline for its environments. The Missing Link probably has too many gun-metal grey corridors, ladders and stacks of crates to not feel like a good portion of the main game, but the attention to detail and sheer ingenuity of the artwork keeps them from feeling tedious. There are enough points where progression is rewarded with entry to an interesting new environment through the 4 to 6 hours of play, even if there could have been more. The windswept upper-decks of the ship have been likened to Metal Gear Solid 2, but alongside the nature of Jensen’s escape and the nature of later environments, there’s a little JC Denton-style nostalgia to be had in these environments.

The decision to keep The Missing Link as its own menu option rather than weaving it into the game was the right one: regardless of when and where the decision to make this DLC was made, it has no place in the main game. Frankly, by its second visit to Hengsha, Human Revolution had drawn the search for Adam Jensen’s sweetheart out long enough, and a better DLC pack than The Missing Link would have still felt unnecessary in the same space. Countless games have received worse Downloadable content than The Missing Link, but it still feels too much like a case of ‘DLC for DLC’s sake’. Barely necessary, in no way essential but worthwhile on some un-urgent level.

One thought on “Deus Ex: Human Revolution – The Missing Link – The Verdict”