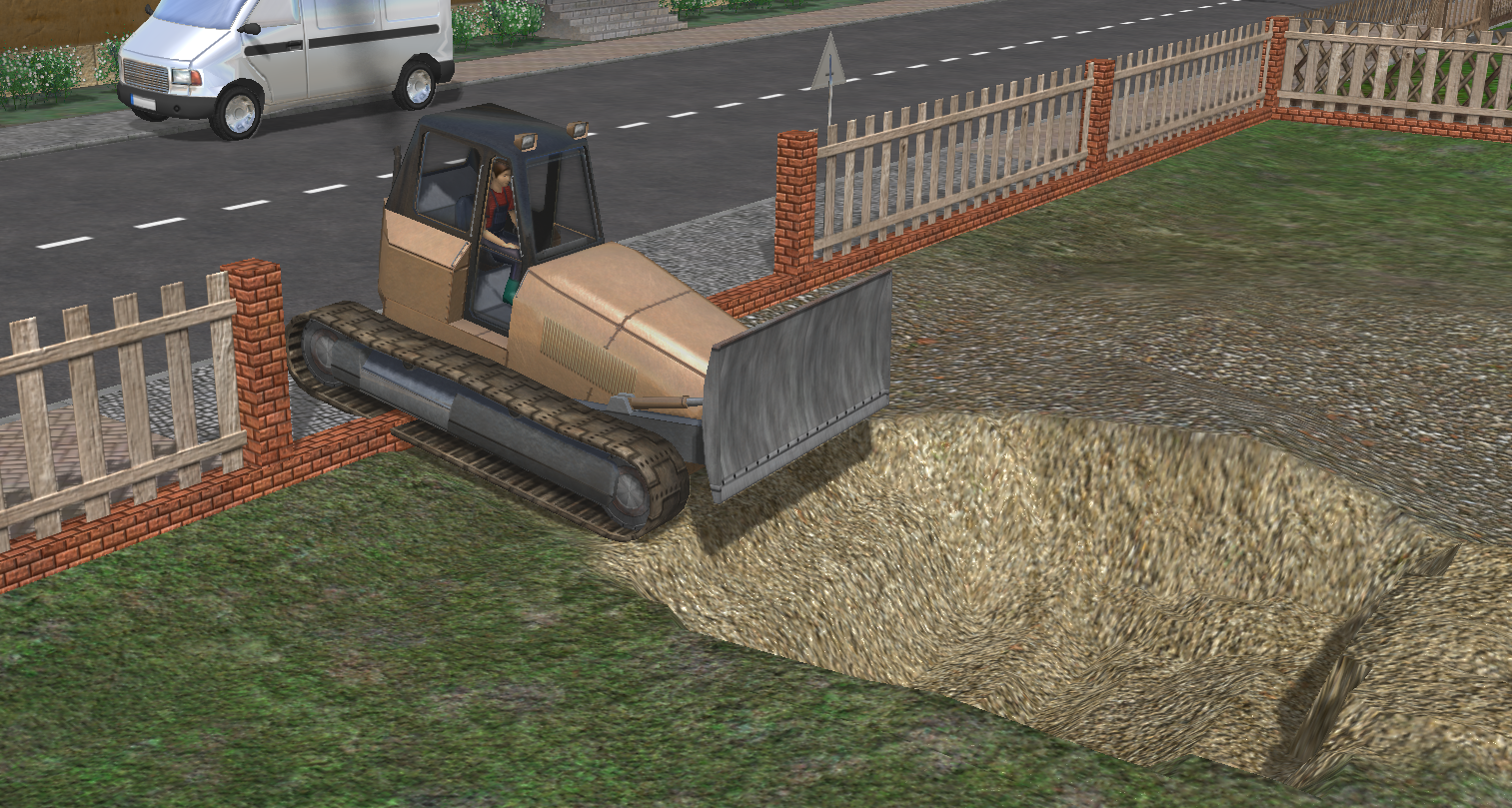 Excalibur Publishing has over the years become something of a running joke within the realm of the simulation genre. Abandoning the usual staples of military simulation, their partnership with the German developer Astragon has instead decided to concentrate on the more obscure and mundane side of vehicle simulation. Recently, Astragon’s Street-Cleaning Simulator became something of a cult hit across the Internet, so when I was offered a chance to try out a couple of their ‘games’, I was powerless to resist the lure of the tediously mundane.

Digger Simulator 2011 is a follow-up to Astragon’s Digger Simulator, released back in 2009. Here you play the role of a construction company with a list of jobs ranging from pipe laying to earth moving. As you complete the various tasks, your company earns money which can be spent on larger machinery. It is a pity that more hasn’t been done with the career management side of things, as the various jobs are presented in a dull list with no career progression other than the acquisition of equipment. With over thirty missions at your disposal, there’s a large number of jobs to choose from, ranging from the simple to the down-right irritating. On the downside, rather unsurprisingly, they all seem to consist of either digging a hole, or filling it in again. For a game concerned entirely with moving dirt around, the terrain deformation system is impressive. It’s clear that the vast majority of the work put into this game has been spent on making shifting dirt from A to B seem realistic. Heavy vehicles leave deep furrows in the dirt when they move, and an accidentally lowered dozer-blade will gouge up half a lawn before you’ve even realised.

Handling the various pieces of equipment is achieved through a fairly intuitive control system, compatible with both keyboard and controller. Once you get the hang of using the various pieces of equipment, it’s interesting to see how they compare. Do you select the small digger for accuracy, or go full force with the bulldozer? Regardless, the worst of the bunch is undoubtedly the hand-pushed ground compressor, which felt more like playing ‘Rather Lethargic Lawnmower Simulator’ (and I’m copyrighting that one Excalibur, before you even think about it.) After being forced to flatten an enormous plot of land with a device that moves at significantly less than walking speed, the ground-compressor found itself soon encased in concrete at the bottom of a deep hole. My main criticism of the game is its lack of building destruction. As a human being, the first thing I did upon being handed the keys to a piece of heavy construction material was to drive it into the side of a house. The result was no more than my bulldozer grinding to an immediate halt. Given that several of the game’s tasks take place in cramped residential areas, I’m disappointed that collisions haven’t been simulated, and surprised that damage to property is not deducted from your earnings. Instead, I was forced to satisfy myself with digging an entirely unnecessary hole in the centre of their pristine garden.

The most significant problem of Digger Simulator 2011 lies with its collision system. It is incredibly easy for one of your vehicles to become wedged on the smallest of obstacles, yet absolutely impossible to shift them once that’s occurred. As a result, an hours work can be ruined in seconds by irreversibly wedging a five tonne digger on a foot high shrubbery. For a hardened gamer like myself it’s a tragedy I’m used to, but after it happened to my wife for the second time, I could see murder in her eyes. I first agreed to look at this game as a joke, but to my surprise I am beginning to enjoy myself. The repetitive nature of the tasks encourages a somewhat zen-like approach to the work, and I’m beginning to take a degree of pride in the jobs I’m undertaking. Flattening ground requires precision blade control, and completing a task without leaving piles of unnecessary dirt around fill you with a genuine sense of satisfaction.

Ultimately, Digger Simulator 2011 is a game about digging. Without a cursed Indian burial ground or long-forgotten evil to unleash from the earth, whether you will enjoy it or not boils down to if a simple, repetitive task will hold your attention for more than five minutes. If you’re a twitch gamer used to constant thrills, look elsewhere, but if you’re looking for an interesting simulation of light construction work, you won’t find better than this.

Probably because Astragon’s the only developer crazy enough to try.