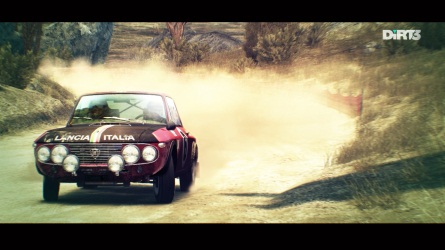 The DiRT games have a heritage stretching back to the old Colin McRae games, with DiRT 3, Codemasters have brought together everything they learnt from the Colin McRae games and the first two DiRT titles to bring the ultimate rally game. Most importantly, Codies’ have taken the best bits from DiRT 1 and 2, stripped out the superfluous aspects and delivered a finely tuned and extremely stylish racer.

I say that, but there is a catch, the PC version of the game which I have been playing uses Games for Windows Live and is a Steam version. All is not perfect with this version of the game, for one I was unable to take screenshots with Steam’s in-built screenshot grabber nor by using FRAPS. Sadly this means you can’t see some of the crazy shunts I got myself involved in. That was an inconvenience, and if you plan on getting the game on Steam, it is something to bear in mind if you use that aspect of the service. The other issue I had arose after finishing a race when the game was autosaving. It crashed and was stuck in oblivion, so naturally I closed the game and restarted. When trying to load my profile I got a lovely message saying ‘Profile Load Failed’ through the Games for Windows Live interface. My only easy way to get back into the game was to create a new profile. Not an amusing turn of events. My issues may just be down to how my system is set up, but it is worth noting if you have a choice between the PC and a console version. Regardless, this is one of the best racing games you are going to get despite my niggling technical hiccups. DiRT 3 is somewhat of an evolution of what we have seen from all of Codies’ racing games since the original DiRT with the biggest change being the addition of Gymkhana, the extreme rally style made famous by Ken Block on YouTube. It serves to fill the edgy aspect that was found in DiRT 2 with the various in-race characters.

Fortunately the Gymkhana mode takes more of a back seat in this edition of the series than some of the extreme sport stylings of its’ predecessor. This approach makes a much better addition to the game. Gymkhana is easy to pick up through a series of tutorials that feature in the Dirt Tour game mode. It comprises smashing into bright yellow blocks, jumping over small jumps, drifting under trucks and doing various spins and donuts. Gymkhana events during the Dirt Tour throw you into a purpose built arena for you to perform your tricks off as you try to rack up the points against your rivals. You can also freestyle around Battersea Power Station completing various Gymkhana based missions to unlock new areas of Battersea.

Away from these fancy tricks the games moves back towards more traditional DiRT staples like Land Rush, Rally and Head to Head. These are the same as ever, though the choice of cars is slimmed down to get rid of some of the more lumbering trucks. What is impressive are the new locales, Kenya provides a wonderfully dusty take on the classic Safari Rally to some lovely looking snowy areas. The other new addition to the series is Drifting, a rapid treck down a road, drifting as you go, a nifty turn around a post and back up the hill. DiRT 3 is one of the best looking games of the year, it takes the graphical prowess of DiRT 2 and F1 2010 and ramps it up a few notches. Racing behind your rivals in Rally Raid you see the dirt flying up and splatting all over your lovely bodywork, that is until you smash your car into a wall. Destruction isn’t quite what it could have been, but it is still miles ahead of whatever else it out there at the moment.

When you do take a spin you can use the ever reliable Flashback feature. In a smart move Codemasters have tweaked the Flashback allowing you to travel further back in time to correct any mistakes which led to your crash. If you didn’t want to rewind time you can always upload your clip to YouTube from inside the game.

DiRT 3 is an extremely impressive game, Codemasters know what they are doing with these games now and the quality is always there, the addition of Gymkhana is the icing on the cake.