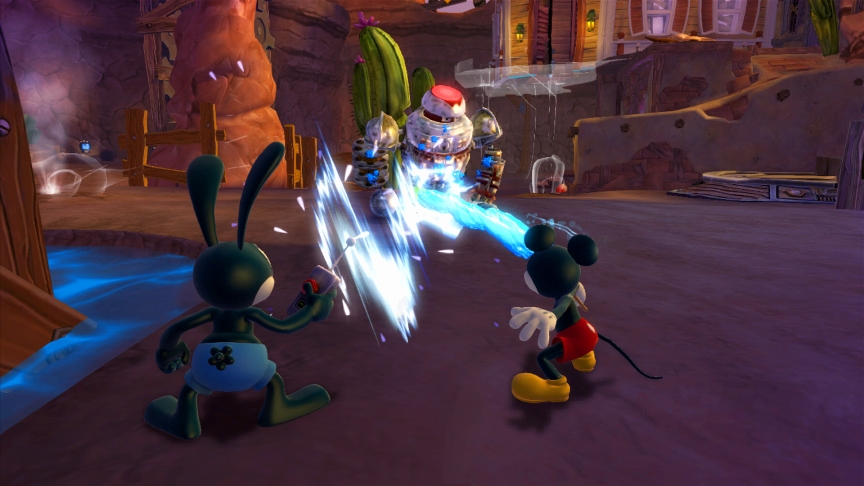 Historically Disney games tend to be fairly good — the Illusion series that includes Castle of Illusion, World of Illusion and the original Epic Mickey: Power of Illusion was critically well regarded. However, much like the inhabitants of Wasteland, Disney’s Epic Mickey 2: The Power of Two is best forgotten.

Epic Mickey 2 follows on from the events of the first game. Mickey returns to Wasteland, the home of forgotten Disney characters, to find everything has changed; Oswald and the Mad Doctor are no longer villains and are apparently both working to stop the earthquakes that are now destroying Wasteland. It’s an ultimately contrived scenario that exists only to allow Mickey and Oswald to team up together to save the day, which is fair enough because as the Mario series proves sometimes story isn’t necessary. Sadly though, things don’t get much better from there.

The story meanders pointlessly between meaningless plot points yet never fully explains what’s going on. Cutscenes try to clear things up but are too concerned with attempting jokes that never quite hit the mark to actually provide any clarity.

One such running gag is that the Mad Doctor keeps trying to turn everything into a musical. This is actually a really interesting concept and had the developers committed and made all the characters go along with it by singing all their lines it could have been really rather charming. However, only the Mad Doctor sings in the game and it comes across as pretty half-arsed. It gives the impression that the developers wanted to make a musical but didn’t want to risk alienating any potential audience so neutered the concept down to what we see in the game. Much like the first game, Epic Mickey 2 sees Mickey attempt to restore Wasteland to its former glory. Using his magic paintbrush, Mickey can paint certain ‘toon’ objects to make them real and can use thinner to make them disappear. Both paint and thinner can be used to overcome almost every obstacle, from platforming puzzles to beating enemies.

The game often attempts to set up morale dilemmas from this mechanic — do you use thinner to erase someone’s house to take an easy route or do you paint in a much harder way? Again, this is a nice concept but one applied in a terrible way. There is very little punishment or reward for choosing either option, so unless you are a true saint or sadist you’ll end up choosing the easiest option every time.

Frustratingly, a lot of the time it’s not obviously apparent that you are about to cause irreparable damage. You may just thin out a wall to get to a chest when everything comes collapsing down and the disembodied voice that follows you everywhere starts castigating you. There are often quite black and white options though, such as defeating enemies. There are two ways you can take down enemies — either slather them with paint, which will convert them to your cause, or destroy them with thinner.

Whichever tactic you choose you will be fighting against the camera to do so. On the 360 and PS3 versions of the game the aiming reticule and the camera are constantly at war with one another, as soon as you manage to lock on to a target the camera will change position and drag your aim with it. Taking down even the simplest enemy becomes a lesson in patience and aim micro-management. It’s clear now why the first game was exclusive to the Wii — using motion controls to aim is much more intuitive. Many of the enemies require both Mickey and the new secondary character, Oswald the Lucky Rabbit, to defeat. Oswald has an entirely different skill-set to Mickey, instead of using paint and thinner Oswald has a remote which can be used to hack into terminals and to stun enemies. This allows Epic Mickey 2 to be played in split-screen, with one player taking control of Mickey while the other gets Oswald.

If, however, you are playing single-player, then be prepared to be infuriated. You can only play as Mickey, while Oswald, who is crucial to completing the game, has the AI of a goldfish. During combat he will stare vacantly at walls, during puzzles he will wilfully ignore instructions and in the platform sections he will knock you from each safe spot. The AI is so bad that it’s often questionable as to whether Oswald is actually a good guy or if he’s just pretending to be so he can sabotage Mickey’s plans.

And for what, co-op puzzles in the lightest sense of the term. The most complicated display of teamwork is Mickey pulling a lever so Oswald can zap a button. It’s the worst type of co-op — co-op shoehorned in purely so it can be displayed on the back cover. Not one level of the game is improved by this so called ‘co-op’, instead its only impact is crippling the single-player with horrible AI.

Ignoring the issues with AI, Epic Mickey 2 plays in a functional, if not particularly interesting, way. The majority of the game is a 3D platformer and aside from some floaty physics works fairly well. It’s exactly the gameplay that you’d expect from a fairly mediocre platformer. These sections are often linked by 2D platforming levels, which had they not been insultingly easy would be the highlights of the game. Both types of section suffer from being too short, it feels that you are constantly being rushed from one scenario to another, never quite getting a feel for the one you’re in. This also gives the main storyline a fairly short length, but to compensate for that there are a lot of side-missions, or as they can be more accurately described — padding. More often than not each side-quest is a simple case of item collecting, and the reward for completing is more items. They are all ultimately pointless and add nothing to the game but an extra few hours of scouting every corner of each level.

There are some plus points for Epic Mickey 2 though. The most obvious is how pretty the game looks. It’s clear to see that serious thought has been put into the design of each level and it’s plain to see that the designers were real Disney fans. Each level is packed to the brim with references to classic Disney shorts and films.

It’s a shame that the gameplay doesn’t live up to the presentation. There are too many issues with the game, from the dodgy aiming to the idiotic AI to make this appealing to any but the extremely hardcore Disney fans. So unless your walls are covered with images of Walt, you might want to give this one a miss.

Review based on a copy supplied by PR. Check out this post for more on our scoring policy.