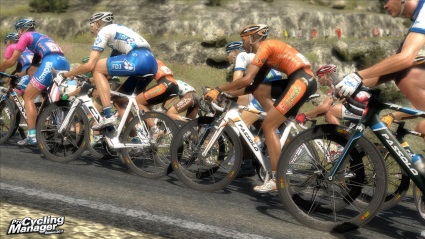 The title says it all, do you want to take part in managing some computer generated cyclists this summer? If not, then what the hell is wrong with you? Everyone knows cycling and management games go hand in hand like two lovers. Shame on you! For those who are interested, then you will be pleased to know that another edition of Cyanide Studios’ (those chaps making Of Orcs and Men) very own Pro Cycling Manager will make a return this summer with the 2011 edition.

I have had my eyes secretly focused on this niche series ever since playing the 2008 version which was a game I did quite enjoy, despite all the problems I knew there were with it. One of the most striking features on the new version are the new rider models, for once they are sporting sunglasses which is a nice change of pace. In addition it is promised that the management aspect of the game has much more detail to it along with a streamlined user interface. God I hope that is true, the user interface really put me off the 2008 version and what I saw of the previous two installments did little to fill me with hope that it had been improved in any meaningful way.

All things going well this will be an enjoyable little management sim for me to get my teeth into, does this make me a bit sad?