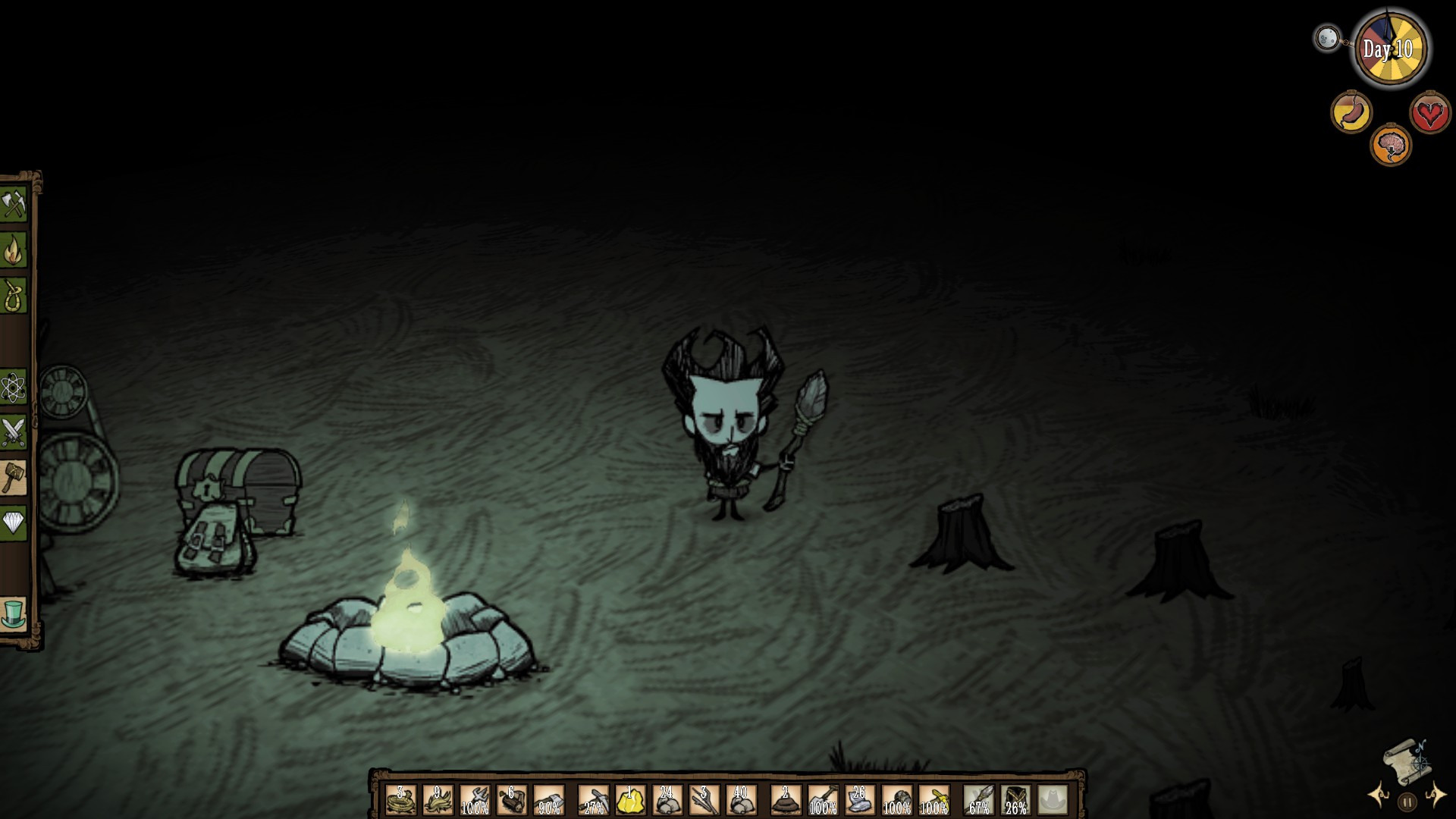 The game at hand is Don’t Starve, and these are some of my first thoughts of the game.

“Damn, I suck at this.” That was one of my initial thoughts on playing Don’t Starve after an hour or so and I thought I would pass it to the side as I did with Terraria two years ago. But the team at Klei Entertainment were kind enough to supply me with a Steam key for the game, so gosh darn it I decided to get stuck in.

Getting stuck in has seen me invest six hours into the game so far after two days playing it, yet I know that I will be playing a hell of a lot more. You see, while Don’t Starve shares some similar survival and crafting characteristics of Terraria and Minecraft, it has done something neither of those were able to do. It has well and truly drawn me in and got my attention. You start the game only able to choose one character known as Wilson. As you enter the randomly generated world, a mysterious figure appears saying that you don’t look too good and you should find something to eat before night comes.

Then you are left to it with no further guidance apart from occasional thoughts from Wilson when he is hungry or warning you to make a fire before night falls. It might be something that players of the aforementioned Minecraft and Terraria are used to, but I was lost at first but quickly picked up the basics. There is no hand-holding in this game, and that works somehow. On the left of the screen are various buttons where you can see what you can craft, taking a look at the small number of options available when you start the game gives you an idea of what you need to do.

The crafting menu doesn’t give much away at first, just enough to get you on your feet with recipes for the essentials like an axe or a fire. In my first hour I found this too little assistance, and my mood wasn’t improved when I made stupid mistakes like trying to attack pigs with a pickaxe or eating clearly poisonous monster meat. There was also an utter failure where I let my fire burn out and was madly trying to place a log on it to keep it alight when I couldn’t see anything….then I was dead.

When I focused my mind though, I found a wonderful little adventure to be had. Nothing is required of you apart from surviving, unless of course you manage to find the Adventure Mode via a special portal on the gorgeous looking random maps. It is the desire to survive which has kept me coming back so far at any moment over the past couple of days. I set myself targets on each new game: build a farm and harvest something from it; survive more than ten days; build a bee hive.

That last goal was what led to my unfortunate most recent demise, but I am really impressed with everything so far. The art style is gorgeous and the music is brilliant. It should come as no surprise that you can buy the soundtrack on the official site. Despite a rough first hour, largely due to my irritable nature at times, I have found myself pondering different strategies when not playing the game. I’ve nearly survived an early winter, stolen eggs and murdered innocent bunnies to keep alive. This game is good, I can’t wait to play some more and give it a Verdict.