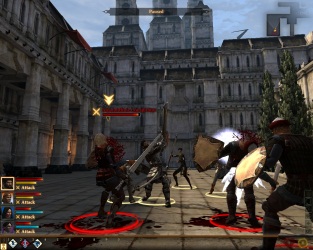 When I came to write this review I found myself focusing on the negatives, on the pedantic “unfun” stuff. Considering the (perhaps unfair) prominence of pedantic “unfun” stuff in reactions elsewhere, that seems counterproductive, not representative of how much I enjoyed it. So I thought I’d get that out of the way first— Dragon Age 2 seems to be quite the divisive title.

I liked the first game despite different reservations. After the initial shine wore off, I found replaying it a chore rather than a fresh new adventure. The combat somehow felt stilted even compared to the clunky mechanics of far older RPGs, which didn’t help my appreciation of the already lengthy jaunts through dungeons. In response to complaints of that manner BioWare have made their sequel’s combat very different. Detractors have called it shallower, hyperactive, consolified and, frankly, I think they have a point (not that I’m entirely certain what anyone means by consolification). But what they might find a betrayal of the game’s roots, I find to be a marked improvement. Even if at times it degenerates into waiting for abilities to cool down, you can still pause and issue tactical orders, you can still handle your target… and it’s not like I’m here for the fighting. Story and dialogue all the way, people!

Dragon Age 2 finds the player in the boots of Hawke, a predefined voiced character rather than the more traditional text-only fully customised player characters in the first game. You choose Hawke’s gender and class and then find yourself flung into the action. No dwarves or elves this time, Hawke is always human.

After a brief combat tutorial you’re on your own. The rather clever approach of making the night/day cycle a map option rather than a realtime progression wasn’t, for example, mentioned ingame. You’re left to notice that yourself, and it didn’t even occur to me just how much the developers assumed players would pick up until I saw someone else point it out. Not that I was the best example of gamer intuition; I didn’t even realise you could purchase extra inventory space (god how I hate filling my inventory to capacity) until I was halfway into the story.

While Dragon Age: Origins focused on the Blight and the rampaging Darkspawn, the story is a lot less epic this time round— and for the sake of not abusing that word any more than the internet already does, I’ll specify that I mean in terms of scope and not just as a complimentary buzzword. Honest!

The plot explores Hawke’s rise from Blight-fleeing refugee to the Champion of Kirkwall, the only major settlement in the game (and a great settlement it is, despite the resident architects being a tad too eager to recycle their designs). It’s told by a member of his own party, looking back on some momentous event that caused the powers-that-be a great deal of consternation.

The game is broken up into Acts, each separated by a few years. While an interesting idea the timeskip mechanics leave me divided; having done so much during those windows of playable interactive time, having three years zip past with no input whatsoever didn’t sit well with me. Hawke is an incredible force of change, leaving his mark everywhere… but now that you’re not watching, we’ll just skim over that and say he did stuff while you were absent. I’m saving up to go to the Deep Roads? Well okay, seems like something I’d do. I guess. As a narrative ploy it’s great, but from a player’s viewpoint in a game… I found it less enamouring.

Fortunately things start to come together in later acts; convenient, because the multitudinous side quests steadily thin out as the game progresses, even counting character-specific missions. There’s an awful lot to do here.

The cast is impressive, and their banter immaculate. Rather refreshingly I found myself disliking characters because I disagreed with their motives and behaviour, and less because they were badly written or unbelievable. And while triggering conversations is a bit funky (on occasion you visit a character’s home to initiate dialogue, even if they’re already following you not two feet from your shoulder) it was great to see characters sharing tales and combat tips, already interacting despite your absence. Wait, you guys visit each other for a chat? The Grand High Player Character isn’t the centre of your universe? Hell yes.

While there’s no Coercion skill this time around (more on that later) or the interrupts I loved so much in Mass Effect 2, you can call in your party members in conversations; some bluff, some intimidate, some use their specialist knowledge to understand the situation. While I missed being a diplomatic expert, having characters serve more purpose than fighting alongside you and offering moral support was a nice touch.

And, as you may have heard, this game has the sheer audacity to feature gay men. Homophobes everywhere reacted in skin-tearing horror, and the rest of the world didn’t really care. Ultimately every romance option in the main game is bisexual, insofar as they’ll express interest in Hawkes of either gender, which seems like a more than acceptable simplification for the sake of roleplaying. Everyone is Hawkeosexual, and who can blame them!

The acting is strong overall, and what few muted or wooden performances there are can largely be passed off as more to do with characters and less their voice artists. The British accents are a welcome change considering our Hollywood existence as an isle where virtually everyone is either from London or from a single nondescript mining town, and Hawke himself (or herself) works well.

(Although whoever voiced Lucky in Isabella’s intro sounded awful— you’ll know him when you hear him. Even if that’s his real voice, the poor man sounded like a comedy stereotype. I shall choose to believe that that was somehow deliberate; Isabella is the kind of party member who would make a seamen joke, so maybe she attracts the attention of people from old 80s sitcoms.) This time the narrative’s lens is much more tightly focused on the main character and their relationships with family and friends, all superimposed over a Mage versus Templar conflict which is perhaps a tad too absent in the early game: too much of the main plot happens in Act III, with the player only hearing snippets of build up in the prior segments.

For those who don’t remember the wider setting’s nuances, magic users on this world are confined to sanctioned Circles, widely distrusted by the masses and outright oppressed by the Templars. Is this a monstrous incursion against their freedom or is their treatment just, does their dangerous nature mean this is the way it should be?

Foreshadowing makes it obvious that the game wants the player to pick a side in this approaching conflict, and part of me resented that. More railroading. Many of the middle-ground dialogue options in the larger event painted Hawke as ineffectual and indecisive, when in truth I was surprised there wasn’t a different approach, a third route. The dichotomy of what the writers feel the story needs, and what the pompous pampered self-entitled player expects.

There was a moment in the later game that summed this up to me; a character point blank asks you how the Templar and Mage situation should be handled, and the game gives you two choices so extreme that even your party calls you out on your glib blanket statement. As someone who adored pumping up dialogue-related skills, the lack of such a speciality and the presence of violent absolutes with no diplomatic option was a disappointment. The “less important” side missions have plenty of different outcomes… the endgame just has two.

Bluntly it was the core conflict of the game which let the story down for me, although perhaps it’d be fairer to say that it simply wasn’t quite as good as the rest of the bits and pieces it had to compete with. I won’t spoil anything, but that was the real meat of the game for me. Excellent, tasty, make-a-vegetarian-feel-really-uncomfortable wondermeat.

For me the only problem with it being a tale told in this fashion was the abruptness of the ending. Still, that seems like something made apparent from the outset; this isn’t your story, not all of it at least. The storyteller’s interrogator is less interested in Hawke than they are the finale’s outcome.

Like Mass Effect 2 before it, Dragon Age 2 seems to concentrate on the cast’s interactions and relationships more than the build-up to the dramatic finale, but that’s by no means a bad thing.

As a shameless set up for a sequel, I was left wanting more. If the next game fixes its predecessor’s flaws it’ll be an instant classic. And hell, even if it doesn’t, I’d put up with the same hiccups to see the story continue.