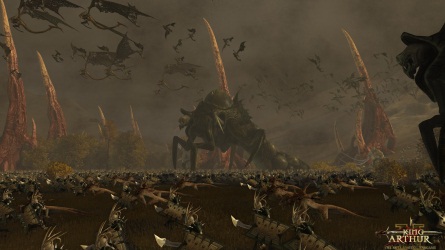 You can always trust Paradox to get things done, a whole bunch of trailers for a nice little group of games. Shall we get started?

At the head of the pack is King Arthur II: The Role-Playing Game. I really enjoyed the first game in the series, I found it a refreshing take on the Total War series with the rich mythology playing a big part of the game. This time Arthur is now the Maimed King who is struggling to bring peace back to his lands. Here is the trailer and some screenies. Next is the revelation that there will be a PvP version of Magicka which will be free for owners of the core game when it is released June 21st. I didn’t really click with this one, but I know that many others did, and this will be a great addition to the game for them. There will be deathmatch for up to four players, a Brawl mode which will see the last wizard standing be declared winner after everyone else loses their set number of lives and Keritor mode, this one slowly unlocks the different Majicks of the game forcing players to adapt throughout the game. Tower defense game Defenders of Ardania will come in Q3 for the PC, consoles and tablets and is set in the world of the Majesty games. I haven’t really understood of the Majesty games themselves, though their fiction has always come across as pretty good stuff. In Defenders of Ardania you will be able to both take control of attack as well as the usual defense. There promises to be three playable races, four player multiplayer and a whole host of magic to cast. Sword of the Stars II: Lords of Winter, a 4X space game coming out this September was also shown off at the event with a trailer which shows off some extremely exotic ships. The Lords of Winter, created with an impressive new engine, will expand on the lore created in the original game and includes the opportunity to create your own ship in the new Leviathan class. Finally we have Crusader Kings II which is the other title from Paradox that I am personally keeping an eye on. This will be released early 2012 on the PC. The game will start in 1066 and cover 400 years thereafter in the usual tradition of Paradox grand strategy titles comprising of shit-loads of turns. Take a look at the family tree in this video and tell me you aren’t impressed. This is a very impressive performance from Paradox, these guys are a core part of PC market and to see such an exciting line up of games really bodes well for the future.