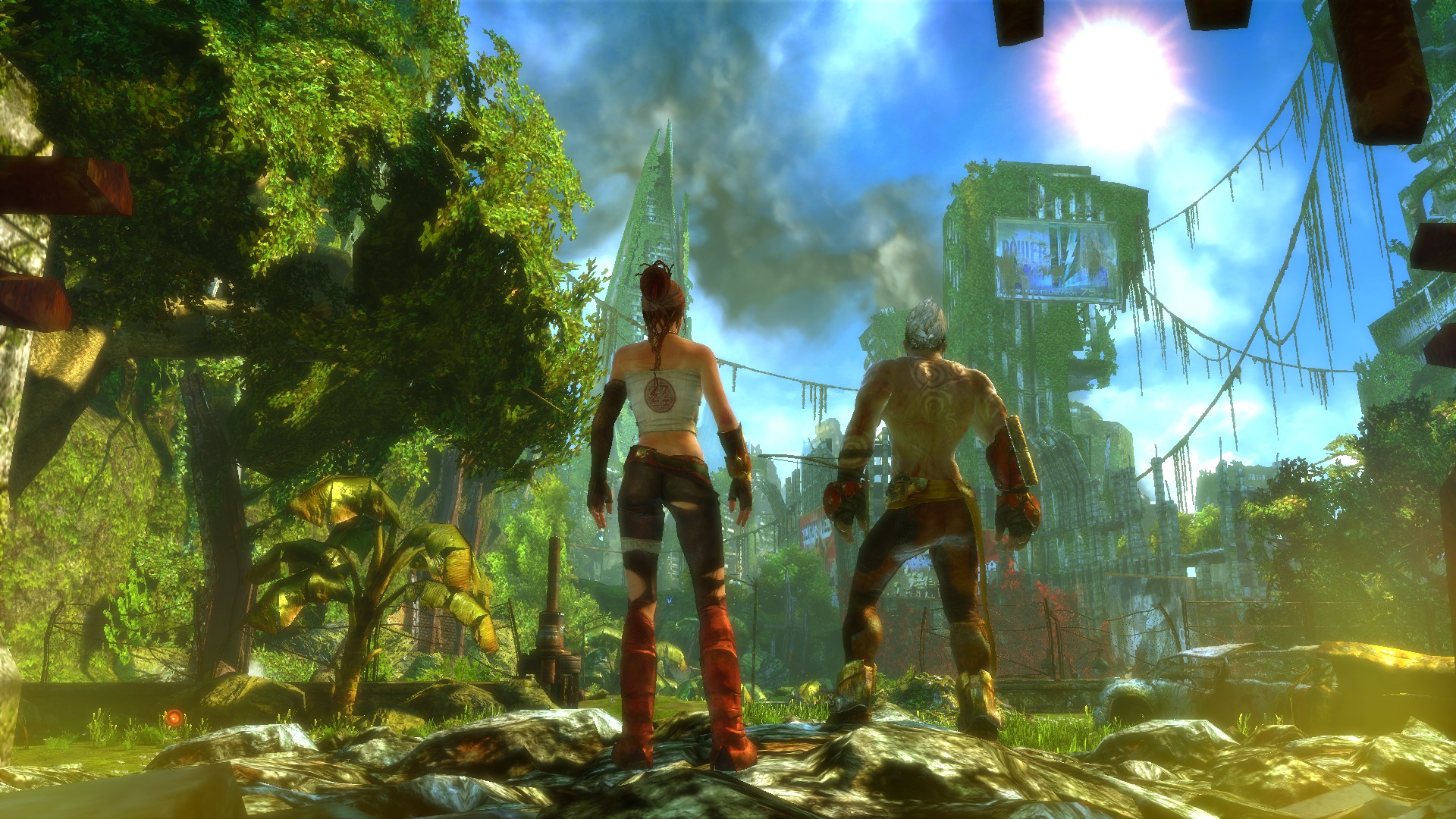 You don’t see many games get ported back to the PC these days, most titles are released on PC at the same time as the console version and are developed together our outsourced to a reliable team. It seemed to be something of an anomaly then when the Xbox 360 underground hit, Enslaved: Odyssey to the West got a Premium Edition release on Steam a few weeks ago. This is most certainly a bad old fashioned port of a game.

Something which I would hazard to suggest that is an essential part of a game being released on the PC is that ability to change some of the graphics settings from the menus and have your changes appear before your eyes once you start playing. It was odd then that Enslaved had the bare minimum of options to tweak with as I was only able to change the resolution from the menu. I changed the game from the low resolution console hangover and set it to 1900×1080. Nothing happened, absolutely nothing.

I was perplexed, but a quick trip to the Steam forums quickly sorted me out with various guides instructing me on how to change a config file to ensure resolution changes took hold along with some other tweaks to turn on fancier graphical settings. I was disappointed with having to take this course of action, but on I set to enjoy the journey. That was until I had to alt-tab to Windows to check on an email…which promptly led to the game crashing when I tried to get back into it. Fair enough I thought, not every game likes to be pushed aside for Windows.

However, this wasn’t the end of my woes, I’ve had several other random crashes when I haven’t been dabbling with the alt and tab keys. If that wasn’t all, after an enjoyable sequence of events leading to the end of a chapter I was ready for a cut-scene. This time the game dumped me back to Windows of its own accord, but fortunately didn’t crash on me. Rather it decided to mute all the sound until the next chapter loaded.

Be warned then, this game isn’t quite as refined as you would have hoped.

The good news though is that there is a good game hiding away, one which I admittedly started playing on my 360 but never got around to making much progress with. A great shame as the fundamentals still hold up with climbing mechanics that you would have seen in Uncharted and Tomb Raider to go along with some fairly enjoyable melee combat.

It doesn’t set the world alight anymore, but the game still works really well. Things are certainly helped by the post-apocalyptic-esque setting where robots have taken over the world and decimated New York. You take the role of the hulking brute Monkey who, upon escaping a prisoner transport ship, is enslaved by Trip your female companion.

Trip knows that she would struggle to survive and find her way 300 miles west to her home town so puts a headband on Monkey which links their lives together. As they journey through New York, their relationship evolves and really is a wonderful part of the game.

Some of the gameplay features between the pair are enjoyable, Monkey can carry Trip on his back at times and throw her across large chasms and up to high ledges. Trip pays Monkey back by distracting the bots and upgrading his equipment. It is a neat partnership, one that certainly would be great with co-op, but sadly we have to make do without.

Included in this special edition is the Pigsy’s Perfect 10 DLC, I haven’t touched it, but I have heard good thing things.

If you didn’t get around to playing this when it came out on the console boxes a few years ago I would encourage you to check it out. But be wary of the potential tech pitfalls that await. If you have already completed the game though, unless you really want to experience it once again, there isn’t much here for you. If it wasn’t for the shoddy port this would get a higher Verdict, as it is though…