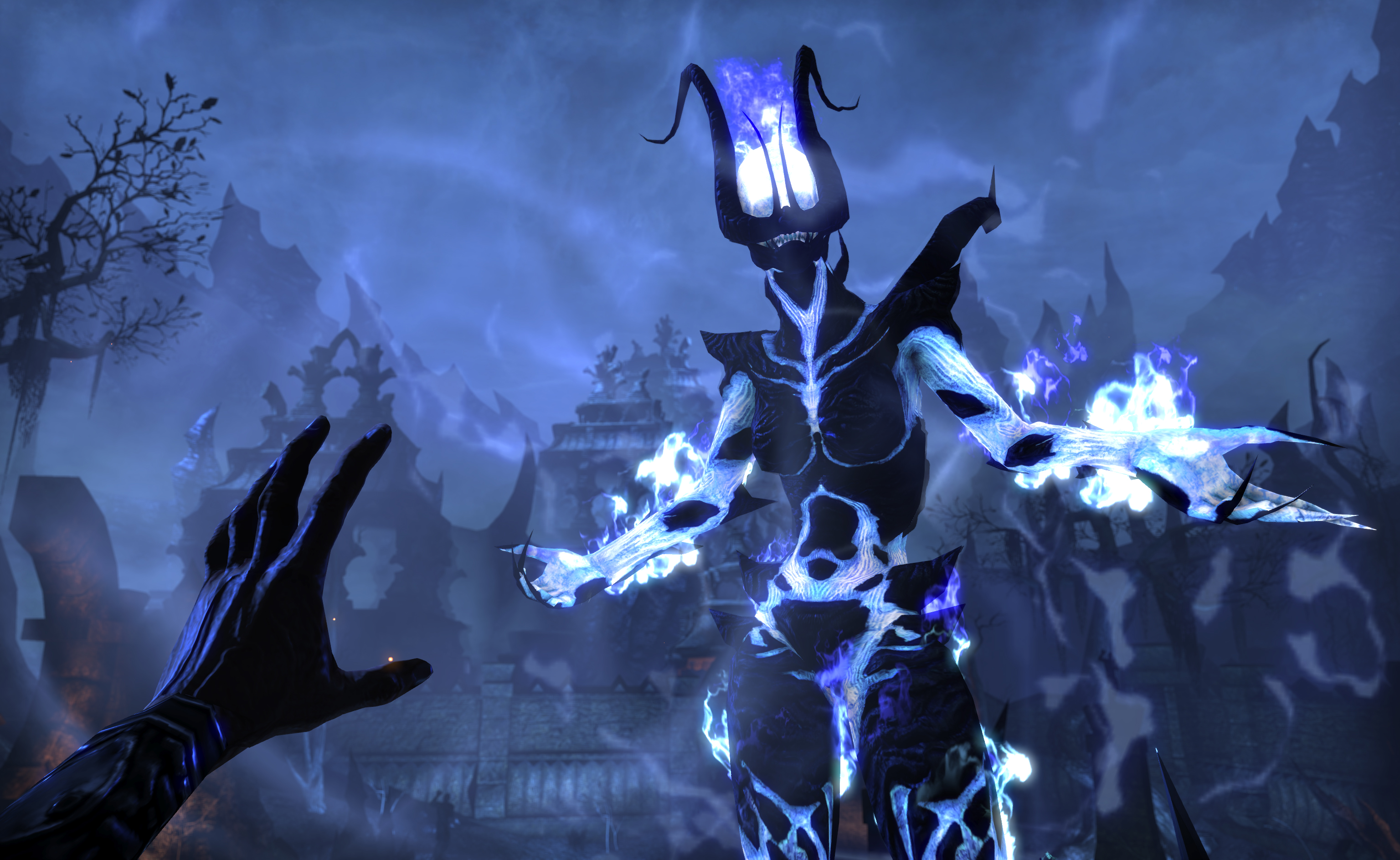 As I write this report on Day Three at the Expo, I realise that the morning has faded away into a blur and I find myself extremely thankful for the notes I made on my tablet this morning. I don’t think I would have remembered what happened without those notes.

This was my first day this year with my press pass, and in hindsight I should have set my press pass to Thursday and Friday. It can be a hindrance being limited to just two passes as a representative of a site the size of The Reticule. Once I got to Earl’s Court I flashed my ticket at a guard and was led down, deep down, into the basement of the exhibition centre to queue with other press, special pass holders and early bird ticket holders. I came to the conclusion here that:

a) the basement would make for a great Mario Kart track, and
b) the Expo staff love to make the punters walk in circles as we all ended up right at the same point we had entered the arena. My first port of call (according to my notes) was The Elder Scrolls Online, the following paragraph is what I wrote from my time in the queue for a chance with it. Yes, there was a wait for some games at 10:00 sharp which just goes to show how many people had early access.

Elder Scrolls Online – snowy landscape, looks very impressive for an MMO. Twenty minute playtest of an MMO totally not long enough to get any good impressions. Lockpicking is in there. Cool looking dungeon. Certainly looks like traditional Elder Scrolls, especially Skyrim thanks to the landscape.

In more detail then…it is safe to say that twenty minutes really isn’t long enough to get an idea of what an MMO is really like as I played the game just like Skyrim, only with the added intrigue of other human players running around some areas. Those twenty minutes really go by fast when you are playing a game as well, much faster than when you are waiting for a chance to play.

I went as a Nordic warrior of some sort, I didn’t want to spend an eternity just making my character, I wanted to see what the game was all about and might have forgotten to make detailed notes on what I was playing as. As I was poking around the room you start in, with the other players lurking around doing the same, a helpful Bethesda person informed me that I was starting out on level 2 and had some ability and skill points to spend. Increased health and a random combat ability were chosen and off I went to meet the village sheriff (or similarly titled character) to get a mission. She talked about three groups of people needing aid for various reasons and sowed a fearful tale of an enemy raiding our shores by boat. I didn’t pay much attention, preferring to flick through some reading material on her bookcase. It certainly maintains the Elder Scrolls vibe with the reading material.

After ensuring my one ability was assigned to a quick slot on the number buttons I set off in search of one of the three people who were in need of aid. After picking up a wand on behalf of someone else I found my new target who asked me to sneak into a bandit camp and find out what was happening. I put on a cloak that I took from a body that she left at my feet and attempted to sneak into the camp.

It didn’t really work, stopping right in front of an enemy and ignoring the awareness indicator did me no favours and I was soon in a duel, which I won! I died moments later when trying to read some orders in a large hut at which point I got double-teamed and sent back to a nearby waypoint after my foolish death.

After some more back and forth fighting (basic MMO hack-and-slash followed by an ability) I was able to set fire to the bandits provisions and rescue a prisoner. In between that I had to fight off the bandits leader which just served to show how limited MMO combat can be at low levels. It was perfunctory and I quickly headed down a hill to a lakeside to kill a mudcrab and gain a rank. Sadly my time was up before I could implement any new abilities.

It certainly seems like a solid MMORPG, but whether that is enough considering the monthly sub that will be required…I’m not sure. Definitely one I need to try out when the Beta lands to gain a fuller taste for things. I had a quick session on Batman: Arkham Origins and was pleased with what I saw. Combat feels as visceral and brutal as ever and the detective mode still seems to be up to scratch as I investigated a helicopter crash. Gotham looked good and I have to say I did enjoy battering an armoured enemy until his armour broke away so I could knock him out. As I still haven’t finished Arkham City there isn’t much I can say apart from this looks like more of the same top quality stuff we have seen before.

From here I attended developer sessions for The Witcher 3 and Watch Dogs. We all know these are massive AAA titles that will probably be very impressive when they are launched. They were interesting talks, that is for sure, but nothing really worth me repeating here that you can’t see for yourself on the Eurogamer YouTube page. Of the two though, Watch Dogs is certainly my more anticipated game.

After visiting the PlayStation 4 section (more on all things Sony (including Tearaway) over the coming days in one consolidated post) I met up with C.Y. Reid of Hug Marine fame and checked out Wolfenstein..

It proved to be surprisingly fun, probably as I went in to playing it with quite low expectations. My enjoyment of the demo was tempered by playing on a PC, but having to use a 360 pad. This was despite the presence of a keyboard, but for some reason no mouse in sight on any of the demo machines. I’ve never been too hot at playing first-person shooters with a 360 pad, and combined with the fact that I accidentally knocked the difficulty up a few notches from default it was no surprise that I took a constant battering. However, fighting Nazi’s and their devious robots with some beefy dual-wield machine guns is a hell of a lot of fun. It will probably be a game you can switch your brain off to, but it did look mighty fun. Despite the difficulty and lack of keyboard and mouse support at the show, I will aim to check this one out further.

I doubt I will get around to playing enough Xbox One titles tomorrow to warrant a separate post so you’ll have to make do with some brief thoughts.

I talked a little bit about the controller yesterday and after using it a bit more today I still maintain that it doesn’t sit well with me. When I picked it up to play Forza it just felt off, it didn’t sit nicely in my hands like a 360 pad does or even the like the DualShock 4 has done at the show. It seems slightly too angular and while the bottom triggers are find and dandy, the top shoulder buttons are still annoying me. They feel like an awkward compromise between being a button and being a trigger. The feedback through the triggers and the pad itself will take some getting used to, but are probably the highlight of the device.

I got to have a long hard look at the Xbox One itself while I was waiting for the endless Forza special views of the cars to end. It just looks ugly and I don’t think I will be able to say that enough. It is one thing looking at the press shots released by Microsoft of it, but seeing it in person lets you truly appreciate the fact that it is just an unattractive, angular box. With the Kinect perched atop it, well I wouldn’t want it sitting in my living room. My 360 (the black, slim version) looks quite good I have to say, and I think compared to the Xbox One it will look even better. If I get a One, it will be hidden behind a PlayStation 4.

Forza was as you would expect, full of flash camera angles and a million different views of the track and car before any racing took place. I chose an old school gull-wing Mercedes to take around Laguna Seca and had a lot of fun. It looked great, but then all the Forza games have looked nice. I really don’t have much else to say from my one lap apart from the fact that it is Forza. Oh, I will say that it compared very favourably to The Crew which I played yesterday but totally forgot about until now. Totally different types of racers, but The Crew didn’t do much for me and certainly wasn’t as polished as Microsoft’s leading name.

My surprise of the day might just be Zoo Tycoon…okay well not really but it was nice to see such a laid back management game being shown off right next to Forza. Building and managing a zoo doesn’t seem very next-gen, but it was there and kept me entertained for ten minutes.

I will give a shout out to two indie games I saw in the indie arcade section within the Rezzed indie area. I’ll save some real words for an indie article, but you really have to check out Chuck Norris inspired mobile title I Fight Bears which is out in October. Also, please do check out Chroma for the PC. Both managed to give me a lift after a long day and enough energy to get back to my hotel without collapsing.

That is it for my Day Three roundup, tomorrows roundup might not appear until Monday thanks to wrestling related commitments. I’m not entirely sure what I will be checking out in my brief stop off tomorrow, but I think I will make a beeline for Titanfall before looking at some more indies.

As I said earlier in this piece, words on Sony related bits (including Tearaway) and the indie games will come over the coming days. Enjoy.