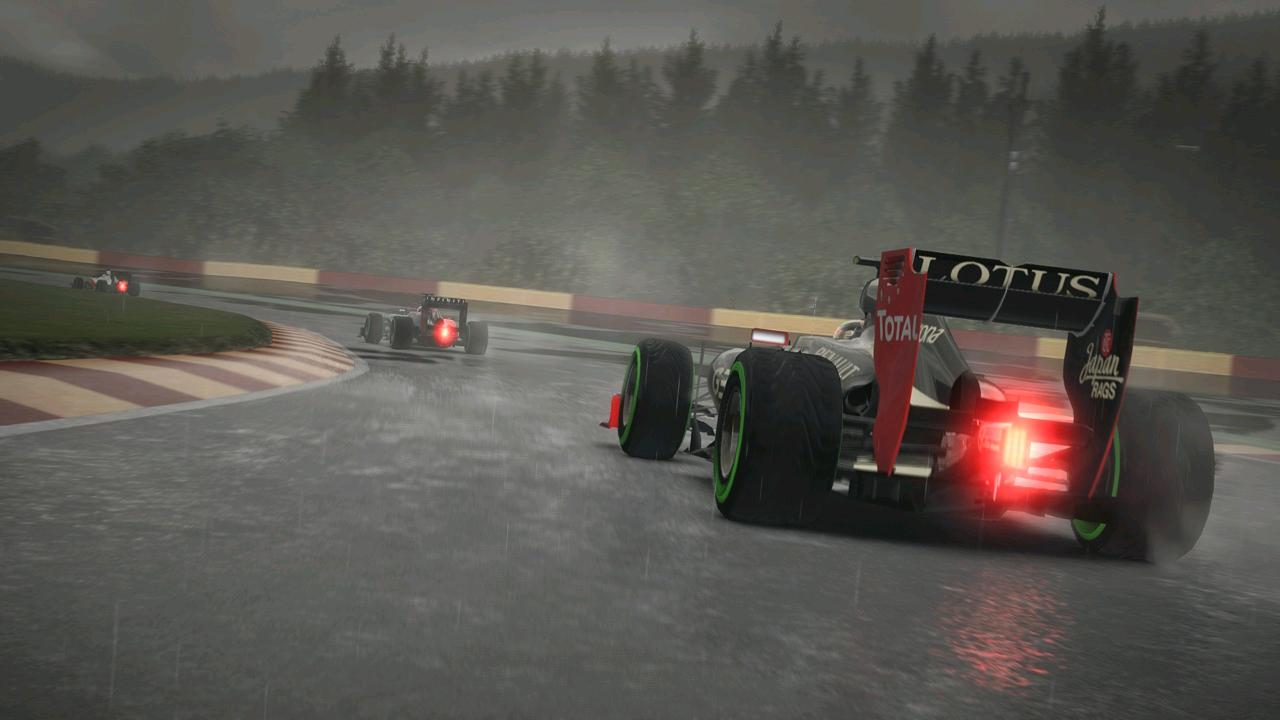 There comes a time where everyone feels the need for a little more excitement in their life, a little more danger. That person may join the army or bet their life earnings on black. For me extreme sports are where I get my kicks, and nothing is more extreme than the high-speed and precision of Formula One. Problem is that it’s notably hard to learn how to control a F1 car, let alone ever dream of becoming a professional driver. It can take years upon years of dedication and perseverance. Lucky for me Codemasters have just released F1 2012, and at the touch of a button I can be in control of my very own powerfully tuned behemoth. That settles that then.

With this being my first ever outing with a Formula One game I wont be comparing it to any past games, all opinions will be freshly formed. And with that I’m ready to begin my ascension to greatness in the seat of a monster.

The first thing I notice is how great everything looks. The graphical style is very slick, the menus are easy to navigate and simplistic, but at the same time offer everything you need in terms of information. The only thing that seems a tad out-of-place is the loading screen music which honestly sounds like it should be in Deus Ex: Human Revolution.

But that’s enough about menus let’s get into the real content, the features and how the game actually plays. Features are something that this game is clearly not short on and there are a number that are new to this years release. The first you will encounter is the Young Driver Test, essentially your introduction to the game and career as a driver. During this two-day testing session you will cover the basics of car handling, using KERS and DRS and racing in wet conditions. You can also free drive round the track if the short tests are not enough for you. As a newbie to the Formula One games, this hands on introduction served as a great way to get me used to the feel of the car and how it handles. I would go as far as to say it left me satisfied that I could make some kind of an impact in qualifying for the first proper race. The video sections did at times feel a little condescending, but generally the YDT captures what I think the feel of testing a car as a newcomer would actually be like. A couple of minor issues I can foresee are that for veterans of the game or anyone who generally just knows a lot about Formula One, this inescapable process before getting into the main season may seem a little grating. Also Yas Marina, the location of choice for the YDT is not exactly the nicest looking or most captivating of courses in my opinion, and so makes the YDT a little less exciting than it should and could be a potential put off any newcomers.

Season Challenge is the second of the new features I will highlight in this years game and where I found myself spending most of my time in single player. Season Challenge is a shortened version of Career with a ten race season, one day qualifying and five lap races. This short burst of intense racing is brilliantly addictive and has a great arcadey feel to it. Whereas you might expect to spend a few hours going through full qualifying and one race day in Career, you could easily complete Season Challenge in a couple of afternoons. It can also serve as a warm up for Career if that is your ultimate goal, helping you learn some of the tracks and compete in proper racing situations.

Career mode itself is where the real test of your skills begins. With only six teams available to you as a rookie driver (Marussia, HRT, Caterham, Toro Rosso, Force India and Williams), be prepared for middle of the pack scraps as the fight for every second counts. Perform above standards and other teams will take notice. They can even offer you a contract mid-season, but don’t expect the offers to come easy as the learning curve at this stage is huge. Being in control of so many features can seem a little daunting at first, but at the same time setting all the driving assists on takes away the enjoyment of the game. I personally started the season with a fair few assists on and removed them as I felt more comfortable with the controls although I still have major problems racing in wet conditions. Champions mode is the final of the new features that I’ll be talking about in this review and yet another great addition to the game. This mode puts you in different racing situations against the current crop of driving champions, with certain race aims in mind. For example in the first challenge you are asked to catch up with and overtake your team-mate Raikkonen, he has older Primes while you have a fresh set of Option tyres and there are a number of cars in between you and him. You have three laps in which to overtake him before the end of the race and all normal rules and penalties will affect your final position. This is another mode that caters to the arcadey racers with more short bursts of gameplay that feel really satisfying when you pull off the objectives asked. While passing each task and earning a medal may be fairly easy, pushing those medals to gold at the hardest level is certainly not. This mode packs a lot of fun initially but can soon get a little tiring if you’re struggling on the higher difficulties.

With all these single player features covered I’m sure you’re wondering just what the online multiplayer is all about. Multiplayer consists of two sections, full twenty-four player races in different modes such as Sprint (three laps), and Endurance (25% of full race) and the second and definitely more sensible option Co-op Championship. It’s not that the full multiplayer races are not good fun, it’s just that you’re never going to be able to take the race seriously. There’s always some nutter crashing into everyone and everything, people with more skill and less skill than you making for very hectic driving conditions, and quite a lot of people who either quit, are DQ’d, or lose connection half way through a race, leaving only a handful of the twnety-four that began. The Co-op Championship on the other hand is brilliant. Working as a team towards the constructor’s championship builds experience as you are both able to talk over tactics and handling tips. If you have the chance, being able to share the full season with a dedicated racing friend makes it all that more enjoyable and is definitely something that should at least be attempted. Controller vs. Steering Wheel is one of the topics I was most asked about when I covered the demo earlier in the month and just for the sake of this review (and any future racing games I buy) I decided to go out and buy one. I initially started playing with a controller and so will start off with my feelings on how that fared. I found the handling to be great once I had gotten used to all the button controls, though at high speeds the analogue sticks felt a bit jerky and this made hitting the apex difficult at times. Overall the controller was great to use and I had no problems completing competitive, although slightly jerky lap times. As this was the first time I had ever used a wheel for my console I initially found it very hard. I was overcompensating for turns making my driving even jerkier than the controller and found myself occasionally taking my eyes off the screen to press buttons. After a while I got used to the wheel and adjusted the settings to my liking. Turns were smoother and I felt I had better grip of things. Whether over time this would become better than my controller handling it’s hard to say but after years of gaming with a controller and not a wheel, it still didn’t quite sit right for me. Another problem and something that I’m quite frankly confused about is that Microsoft seem to have not included any shoulder buttons on their Speed Wheel, meaning that a re-mapping of the controls is needed and some features like camera control are just missed out on altogether when using the wheel. Personally I would stick with a controller in this case as it fares very well with this game. It also took me an awfully long time to decide on which wheel to choose, as many of them are very expensive or not suitable for F1 gaming.

To sum up my feelings for F1 2012, it’s been a very enjoyable ride but the learning curve to get to the stage I’m at (which is still pretty amateur) was very steep. There are plenty of features, that cater for both the hardcore simulation player and the more casual player, that will keep you entertained and attempt to increase your skill in the game. Online, while fun, was disappointing as getting a good clean race was almost impossible unless you filled a whole lobby with your friends, and only having a couple of game types seemed a little shallow. If your asking the question of whether to buy a wheel for this game or not I would suggest not as the controller does a great job. There’s masses of single player content and replay value by taking on different skill levels or attempting a season with a different team.

Please check this post for details on our scoring system.