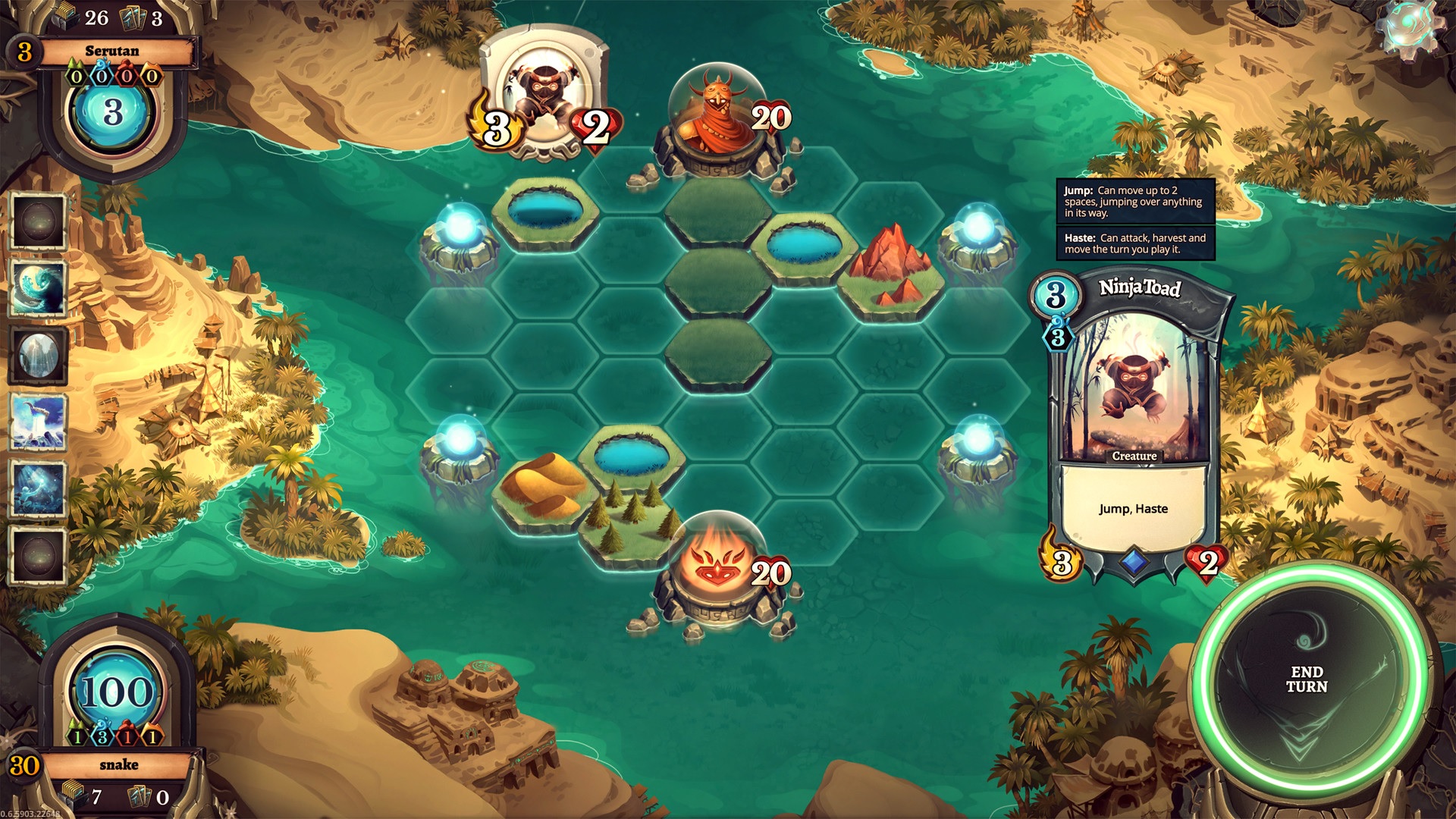 As a well versed player of digital CCG’s Faeria is a game that instantly feels familiar to me. Upon launching the game up for the first time I find myself looking at the cards and even before I play my first game everything makes sense in terms of understanding the mechanics of the cards, which although under different names are shared with other digital CCG’s I’ve played in the past. What’s different about Faeria is the use of an environmental board on which the cards in your collection can be played and can move around before entering combat. This simple addition adds a whole new level of tactical thought to a game which already has all the layers of a normal digital card game. The combination works so well that I found myself sinking 4 hours a day over the first weekend of playing.

A typical game starts with an empty board and hexagonal shaped ocean pieces on which you place your land. Depending on which faction you build your deck from you can either place mountains, lakes, forests, deserts, neutral land called prairies, or a combination of any and all of these types. You can then place your creature cards onto these lands. Your creatures can only be placed on your own lands although they can be moved onto opponent lands after they have been on the board for 1 turn or more.

From here it’s basically a game of chess with your creatures facing up against your opponents. It’s important to note there are also four Faeria wells at the corners of the board. Faeria lets you use your cards and abilities and controlling these wells can sometimes be critical to winning either long games where your opponent will run out of Faeria if not managed properly, or rush games where you will be placing a lot of creatures and using a lot of event (special ability) cards within the first few turns.

Matching your card choice to your play style is also a large factor of success and it’s important to know what all your cards abilities are and how you can best play them. This of course takes time experimenting and refining your deck when you think something’s not quite right, or not exactly how you want it to be. Whether you play defensive, rush, or go for a deck themed around a particular feature like ranged combat or a focus on efficient trades it’s important to have a game plan.

Once you’ve had a good look at the cards and have drafted a deck you’re happy with, it’s time to get into the thick of the action, and there’s a few choices of game types to be made. Firstly you should be focusing your time in solo mode, where you unlock all of the codex cards (basic game cards) by defeating AI opponents from each of the factions; water, desert, forest and mountain. Once you have done this and refined you deck with any of the new cards you should head into battle mode. Here you can play against other real players in ranked or un-ranked play. Un-ranked is a good way to test new or experimental decks you have been creating, while ranked mode, going from 25-1 and then onto God rank is the ultimate test of your deck crafting and playing skills and stands as a mark of your commitment and skill with the game. Pandora is another mode players of CCG’s might also be familiar with and is also known in other games as draft mode, or arena. This has yet to be implemented in Faeria but is very near and from what I’ve heard will work much in the same way that it does in other games. As you gain ranks and level your character there are certain awards that can be picked up. Gold for buying booster packs, card crafting material and avatar pictures. There is also a shop in which you can buy all these things and booster packs, but the good thing about Faeria is that in this early stage with not too many cards it’s strikes me as not very pay-to-win, which is of course a great thing. As the game progresses (as with all CCG’s) the struggle will be in keeping up with all these new cards and the change of the meta game towards these cards. That moment is not upon us yet and if you wish to get into Faeria I would say get in early and try to keep on top of the cards as much as you can.

At the moment Faeria costs £17.99 on Steam and with this you get 20 booster packs, 10 entries in to Pandora mode when it becomes available and exclusive aesthetic item for your god. Eventually it will be free-to-play but then the bonus for supporting development during early access will be gone. Assuming that Pandora entry is about 100 gold and ignoring the exclusive avatar items, this would have cost you 3000 in game gold, which takes while to farm though quests, so to get this quick boost as soon as you start the game feels worthwhile to me.

The Good and the Bad of Faeria
So you’ve probably heard enough about the in’s and out’s of Faeria to decide whether it’s your kind of game or not, but as a whole is the game worth playing or not? Let’s start with the positives.

Positives – The beautiful art style, familiar feel, smooth gameplay, the fact that it’s not pay-to-win, is easy to pick up and hard to master and lacks in RNG compared to other CCG’s are all great but fairly small reasons why you should play this game. The main three points for me are that: 1 – Faeria already has a great community of players who are all willing to help you understand the game and craft better decks and can chat to you thanks to the forum link you find in game. 2 – Faeria has a uniqueness about it in that it has an almost board game feel but it actually a CCG. The mix of evolving environmental board and chess game of your cards on this board is brilliant. 3 – Faeria even in this Early Access stage receives regular updates to balance the cards that people are playing every day. This is a great way to keep the community feeling in touch with the game and the changes that are happening whilst also receiving all the normal bug fixing and so on you would expect for a game in Early Aceess.

Negatives – Considering this game has only just entered early access on Steam there are actually very little negatives about it. This is probably in part down to the community and the open communication the developers have with the community, allowing them to suggest feedback and directly send screenshots or reports of bugs to a live developer and a team of moderators. However in the spirit of fairness I feel it would be unjust if I didn’t mention the minor negatives I have found with the game so far. 1 – There is a running battle log at the side of the screen, this is helpful but only has a history of a few turns. It would be nice to be able to scroll down this list and see what happened previously as occasionally your opponents turn can be comprised of several different moves, attacks and spells and the log quite often doesn’t even go back a full turn. It could also do with a little more explanation. Sure a creature attacked, but who did it attack? Quite often the target of spells and attacks are not shown. 2 – When opening booster packs and finding new cards, there is no indication of where these new cards are when you go back to the drafting stage. It would be nice if there was some kind of highlight that showed where these were for new players who were not acquainted with all of the games cards yet. 3 – There is currently no player interaction while in game. No emotes, no chat between friends, nothing. While some players may enjoy the silence it would be nice to have the option to chat to friends if you wanted. 4 – As the player base of Faeria is just taking off, matchmaking can be a bit unfair at times. You can be placed with an opponent five ranks above or below you, or even face the same opponent twice in a row. I assume this is because of the smaller player base and I’m sure it will be rectified in due course. It’s not like it happens all the time anyway!

If your interested in checking out Faeria further I’ve included a gameplay video below where I detail a couple of strategies for playing and talk about some other aspects of the game.

Faeria can be purchased for £17.99 on Steam, but will become free-to-play in September.