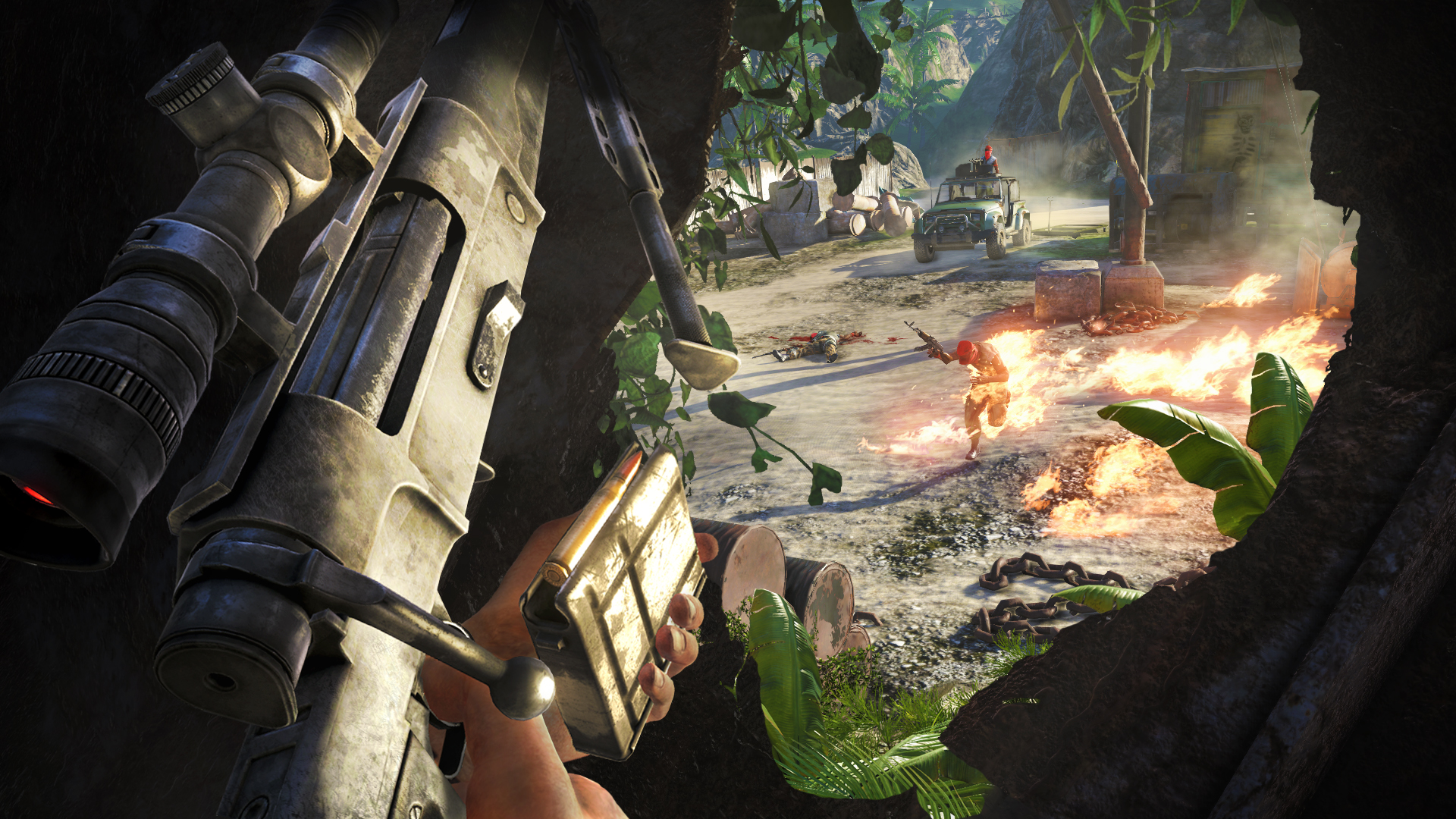 In Part One of my Far Cry 3 hands on report I talked a little bit about climbing a radio tower and assaulting a mercenary outpost with the help of a hang glider and jet ski. The second part of my report picks up after I have ensured the outpost is cleared.

The mission from the notice board asked me to eliminate a mercenary leader in a nearby camp with a melee or knife takedown. So far, while I had tried to assault the outpost quietly I ended up having to go in guns blazing; this mission would be my first chance of trying out some of the stealth mechanics.

First though, I had to get to the target camp. I decided to take a wander around the area rather than heading straight to the target. On my travels I noticed that I was walking past a place marked with a leaf on my mini-map, I located a likely looking bush and was able to harvest some leaves from it. Wondering what else I would be able to do, I took out my bow and arrow and targeted a small wild pig. Low and behold, I was able to skin it and harvest some hide.

I opened my crafting screen to see what I could do, and was pleased with the options there were. Unfortunately, the majority of the creatable items had already been made, such as weapon holsters, clearly done so that people playing the demo had a decent starting point with their equipment. I also lacked the resources necessary to craft any more arrows, but I was able to make a drug which would turn me into a proper hunter by letting me see animal tracks more clearly. It was an easy enough system to use, and yet certainly not one that will take you away from the main game for hours on end. While I was checking other things out, I took a gander at the skills system. Again, much like the crafting screen, a lot of the skills had already been learnt across the three branches of the skill tree. During my brief time on the skills screen I realised I had a skill point I could use, presumably gained from my assault of the outpost earlier in my play session. Remembering my failed exploration of the sunken ship I invested this valuable point into a skill which gave me greater lung capacity for underwater exploration. Sadly I didn’t venture back into the water to make use of my new skill, but again my impressions of the system were that they added to the game without being a major distraction from the action.

Returning to the mission at hand I started to make my way to the small camp where my target was, my journey involved crossing a road. Knowing that last time I was in such a situation I had accidentally thrown a grenade I made sure not to make any rash moves, especially as I could hear a vehicle approaching the place I was going to cross. Approaching the road itself I saw a jeep pulled to the side with three guys chatting around it, they didn’t seem bothered by my approach, but when the other vehicle came past they opened fire on it. I wasn’t expecting anything like that to happen, but it pleased me to see as it made the world I was in feel that much more alive and organic. Of course, I got involved and helped the guys with the parked jeep and proceeded on my way.

I soon located the target area, but I forgot about my mission parameters and launched an attack with a grenade and marched in with my sub-machine gun. The first few guys I killed didn’t affect anything, but once I knocked off the target I received a nice mission failed message. I respawned at the point of entering the target area, sadly I was hoping that the mission would be written off and I would proceed without getting a reward. However, I learnt my lesson and tried again, this time taking the silent approach a bit more seriously. I made the decision to clear the whole camp out silently; I crouched down and stayed out of the line of sight of the patrolling guards by walking through some long grass. I reached a hut and waited for the one guard to walk around the other side; I followed him and launched a takedown move with my knife taking him down silently. I repeated the routine with the other guard before turning my attention to the man I had to take down to complete the mission.

There weren’t any more buildings to hide behind, so I had to carefully manoeuvre my way around him through a vegetable patch before jumping at him with my knife at the touch of a button. The takedowns I carried out did feel slightly artificial with a massive lunge forward when pressing the correct button, but they were mighty satisfying.

With the job complete I decided to make a move back to my starting point in the village as there were symbols indicating I could pick up more jobs there. Night was closing in fast though, and there were more animals around.

As I got closer to the village, I saw an antelope lying on the ground, clearly something had killed it. A bit further up the path was another antelope, I thought it would be an easy kill and pulled out my bow once more. I got off an arrow, but it only made the animal angry and he charged me with his horns. I whipped out my pistol and finished him off, only to turn around and see a big cat ready to pounce. Clearly this beast had killed the first antelope, and with the sound of the gun it had turned its attention to me. Needless to say, I didn’t survive the mauling it gave me after already suffering wounds from the charging antelope.

I let go of the keyboard and mouse feeling extremely impressed with what had just gone on through my playtest. The world felt organic and alive, the crafting and skill systems were neatly packaged without taking too much away from the action, while the action itself was brilliant. This is going to be one hell of a game.