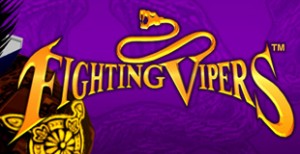 Nostalgia is a strange, bitter-sweet thing. Some say we look at the past through rose-tinted glasses, and when it comes to childhood memories involving computer games – the glasses aren’t so much rose-tinted as blacked-out. Our past-selves simply couldn’t comprehend the leaps and bounds of technology and graphical fidelity has made in the past decade or two.

And so, re-playing our cherished memories can be something of a painful experience.

Fighting Vipers was one of the most amazing looking, fluid and intense games I had ever experienced at the tender age of 13. The characters tugged at my imagination and I spent many, many late nights (“it’s past 9pm? My mum is going to kill me…”) eyeball-deep in move lists, trying to beat Raxel and his silly guitar. I also owned Virtua Fighter 2 for my old Saturn, but compared to the blaring noise that seemed thematic to FV, it felt drab and dull.

Except for Shun Di – he was hilarious.

Fighting Vipers introduced such mind-blowing concepts such as breakaway armour, outlandish costumes and even roller-blades to my under-developed mind. One day, I finished my opponent with a powered up roundhouse kick that blew him through the perimeter fence! I was in my element, and within a few weeks, I had become truly godlike with Picky and his skateboard. My only other friend with a Sega Saturn tried to keep up with my monstrous skill, but in the end he fell, like all the others.

Fast forward to age 29. Fighting Vipers is being re-released on the Xbox 360, along with several other AM2 arcade-spawned fighting games (including Virtua Fighter 2), and although I could remember it being a bit part of my formative years, I couldn’t really put my finger on why.

Old age does horrible things to memory, you see.

Three hours of play later, I felt confused – the visuals have been sharpened up somewhat, but still… it looked so much better in my mind and memory. Clumsy controls, and the squinted distortion of 1995-era 3D visuals, splattered with colour and flailing-limbs had left me bewildered, and slightly nauseated. Even my cherished skateboard-swinging character felt unresponsive and slow, his moves ungainly and my ageing fingers found it difficult to string moves together. Is this just a bad port? Have they been lazy and forgotten to tighten up the controls for the 360’s controller?

Of course not.  Eighteen years of progressive fighting games, Street Fighter, Tekken, hell, even the Naruto/Dragon Ball Z button-mashers, have simply changed the nature of the beast. Precision has been replaced with fluidity, long button combos have went the way of the chain-smoking Dodo-birds and counter-systems have risen in their place. Even the traditional digital-controller has (sort of) been pushed aside for the higher accuracy of the analogue-stick.

Fighting Vipers is, to beat-em-up fans of today, an antique. A game built on clockwork and gears, designed for a different breed of gamer – the last generation. It still holds charm, it still holds value for those who wish to relive or rediscover the roots of the arcade-combat vintage. The 360 re-release even has some lovely online-play that works flawlessly (although it was terribly quiet when I played). But if you never played it in its heyday nor have the patience to deal with its antiquated combat styles and slow, yet unforgiving pace – you may be somewhat confused as to what all the fuss is about.