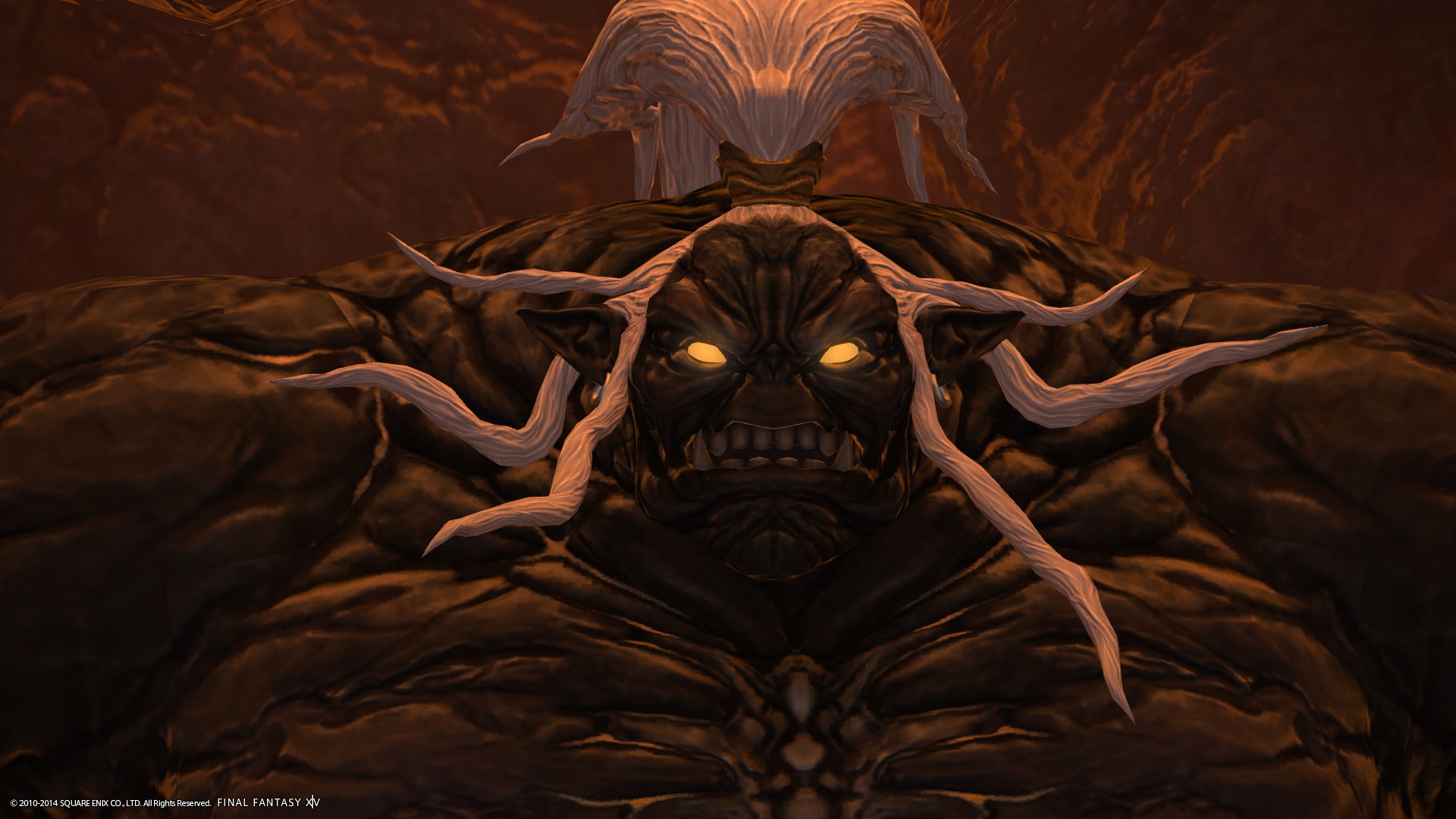 The sickly sweetness beckoned me once again, promising that this time would be different. This time it wouldn’t taste just like all the others, this time it would last more than a fortnight… And like a mug I believed it, and bought Final Fantasy XIV for my PS3 and gave in once more to the hollow promises of that most seductive of genres. All the others had overpowered me with their sickly, over (or under-) cooked flavours that would inevitably fade with the morning dew. I expected little.

Oh. Hey, this is quite good actually. Wheee….

Fast forward six months – FFXIV lasted me a whole two months on the Playstation 3, a personal record. But, as with most MMOs I have played, I enjoyed it and then I moved on. Last month, however, it was re-released on the PlayStation 4, with all the next-gen bells and chocobo-whistles turned up to eleven, as well as a freebie upgrade to those who had already bought it on the PS3. I was intrigued, and my memories fond enough to justify renewing my subscription, and so I did. I also realised that I had written exactly zero words on what was one of the least terrible MMO games to appear in a long time. I decided to fix that too.

Final Fantasy XIV is a world half-a-decade after a disaster. The factions aren’t at war (sort of), the great heroes are mostly dead, and monsters litter the landscape. It’s not exactly a scene of devastation, but things are fraught – in a typically Final Fantasy-ish way. However, the three grand regions have become a hotbed for aspiring adventurers to test their mettle against the local fauna and seek fortune and fame. Starting on the back of a chocobo-pulled wagon, my character – a Miqo’te (cat-person-thing) called Ordo – begins his adventure trundling towards the grand sand-castle of Ul’Dah. The early conversations in the game make it fairly clear that you are just one of many fresh adventurers arriving, and gently shepherds you towards both story-quests and your chosen profession’s guild.

This is something I noticed throughout FFXIV – the constant notion that the world is fully aware of all the mighty heroes wandering about. The first time you talk to the first quest-giver – a Lalafel (small rodent-like person) called Modomi for those starting in Ul’Dah – you get a little welcome speech. Much later on, you catch her giving the exact same speech to another newcomer. It’s a tiny, almost insignificant thing, but it’s amazing how different it makes the world around you feel. So many MMO games spend hours swooning over how you are the mightiest hero around, even as a max-level player saunters past with a sword bigger than you and armour you could start a business in. FFXIV handles this superbly by simply acknowledging other players exist. One memorable little cut scene showed a failed dungeon party recuperating at an inn, and actually having a go at their healer for letting the leader die. It’s completely irrelevant to the game, and yet it endeared it to me significantly.

The actual questing stuff? Less so. Don’t get me wrong, there are loads of quests and it tugs you along your own story at a comfortable pace, but people looking for a Guild Wars 2-like mould breaker should probably look elsewhere – this is firmly in the quest-check-list stuff. Possibly a shame, and yet lets face it – this is what an MMO is like. Moaning about  “kill ten things” quests would be like complaining about a racing game having the same circuits as all the others. It’s just part of the landscape. The combat however is pleasingly fast, and supremely slick on my PS4 pad. Clever button configurations means I can have sixteen hot-keys to play with at any given moment just by using the triggers to choose which set I want. FFXIV also dodges the MMO sacrilege of giving you forty-thousand abilities to choose from – instead the classes settle down with various combos and lets you beat stuff senseless with your favourites. It’s a slick (if uninspired) system that I found myself liking more than I expected. Visually, the combat is flashy and loud – as the Pugilist class, anyway – and… yeah, that’s about it really. Functional, fun and bright, if nothing else.

But the combat isn’t what kept me playing all this time. No. You see, FFXIV is one of those rare MMOs that actually have a central plot for your character. A winding thread of story that circle-strafes your chosen character and those around you, occasionally leaping in to deliver a few lovely moments of exposition. The plot is – to be nice – fairly standard, about crystals and bad monsters and an evil empire etc. But the way it manages to weave so much Final Fantasy syrup into its MMO-molasses keeps me going back. From the laser-spewing dragon Bahamut, or the monsters dragged straight from a Final Fantasy 7 bestiary, to the techno-magic from Final Fantasy 6, all steampunk and pointy – it pulls in all the stuff that any seasoned FF-fan will instantly recognise and builds a theme-park out of it. To the average gamer, it’s more of the same neon-fluff that coats most eastern MMO games, but it adds a layer of familiarity to FFXIV that makes it incredibly more-ish for a Final Fantasy geek like myself.

The ability to switch classes on a whim is a fantastic touch too. Your class is, essentially, based on what weapon you happen to be holding at the time. Each class is levelled up separately, however, so it makes sense to stick with a favourite if you want to make any headway, but the notion is fantastic. Getting bored with your Pugilist? Here, try a Lancer, he has a pointy stick. A further notch to this is the advanced classes (or “Jobs”) – get your Pugilist level to 30 and your Lancer to 15 and you can combine the skills and morph into an almighty Monk. It adds a layer of growth that just gives that hook in your cheek an extra barb. As someone who gets bored with MMOs rather fast – I got to level 42 in Guild Wars 2 before getting a nosebleed – it really is something special. I currently have a level 32 Pugilist, a level 11 Conjurer and am levelling up my Lancer to crack open that lovely Monk-nougat.

Yet another note on the Job system is that all gathering/creation professions in FFXIV are actually classes too. They even have their own guilds and quest lines. This may appeal to some, however as I never usually bother with picking plants and cutting down trees my “making-stuff” skills are hilariously under-levelled. Which is a shame as in order to fix Materia (yup, Materia is in here too) to my level 25 leather armour, I need to be a level 25 Leather-Worker. Bugger. It does, however open up a whole load of fun for players that liked enchanting in World of Warcraft – travelling the world, fixing/upgrading peoples stuff for a fee. I’m not sure how fleshed out the crafting quest lines are, but I do know there are repeatable Tradecraft quests from the various Guildleves spread around the world –  Guildleves assign level-specific repeatable quests and are a godsend for anyone trying to level up another class.

There are issues with Final Fantasy XIV – mostly the players, obviously. It’s an MMO. People are doing the usual MMO-irritations – spamming nonsense in the chat, random guild invites, running around you in their underwear as you try to fight a world boss, etc. It doesn’t help that FFXIV is also cross-system, meaning you are playing with players on PC and other systems too. However there are some excellent grouping systems in place in order to encourage group play and reduce friction. During the main story quest there are several dungeons – including some excellently juggly boss-fights. A simple group-finder allows you to queue for a dungeon and carry on questing until you get summoned to start, and groups are automatically assigned players based on class – usually two damage-dealers, a tank and a healer – and the system even offers bonus incentives of extra experience/cash if you happen to be a difficult-to-come-by class. This bleeds into the dungeon grinding for gear too, as once completed, each dungeon can be queued for wherever you are at any time, and again gives you incentives for playing a specific class.

However, in truth, my interactions with other players has been limited to said dungeon crawls as – well, the PS4 pad just isn’t suitable for efficient text communication. It stands as an impressive feat, however, that in the four/five dungeons I have played it has never been an issue thanks to hot-bar emotes and obvious roles. Of course if you were smart, you could plug a USB keyboard in and use that – the game actually supports full mouse and keyboard controls – but I kind of enjoyed MMO-ing from the comfort of my couch. Under my blankie.

Final Fantasy XIV is a superb game. Although it does re-tread the MMO formula that has become the norm, it manages to offer incentives beyond the typical grind and is a lot of fun to boot. Perfectly streamlined for console play, it seems a perfect entry point for those unaccustomed to MMOs (read: console gamers), and yet manages to keep an old hand like myself interested.