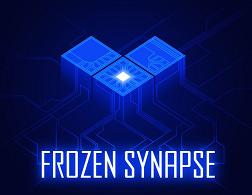 Oxford based indie developers Mode 7 have announced via amusing press release that Frozen Synapse is now entering the final stages of beta testing. They’ve also announced a single-player campaign which is available to those of you who  pre-ordered to play right now.

‘“We always wanted Frozen Synapse to have a big single player component. This was inherently daft, given the fact that we’re a very small team, but we’ve done it now. We’re very pleased with the results!” ejaculated Joint Managing Director Paul Taylor, quotably.

Bullet points for fun and profit:

– The game is set in a near-future city named Markov Geist; various factions vie for power there, from the corporate behemoth Enyo:Nomad to the dangerous cultists of the Blue Sunlight Foundation.

– Do factions ever do anything other than “vie”? They’re just vying all over the shop. Dammit, I’ve wasted a bullet point now.

– Each mission has a defined set of objectives but takes place in a semi-randomly-generated level, so replaying brings unexpected delights

– Once generated, every iteration of each mission is unlocked, meaning that if a particular random configuration tickles your fancy, you can replay it ad infinitum

All this…and money off as well!? We must be INSANE AT THESE PRICES!!? We must abuse punctuation!!?

To get 30% off the pre-order, all human beings have to do is use the code STANCHER during the order process at http://www.frozensynapse.com‘

For those of you yet to sample the delights of Frozen Synapse, it’s a top down, turn-based squad shooter with a retro-future aesthetic (that sounds contradictory, but think of Tron-inspired wire frames given a modern sheen). Players queue up moves and strategise for possible outcomes, trying to predict enemy movements before ending their turn. Once both players have decided upon their actions, the results occur simultaneously, often resulting in hilarious and unpredictable carnage, as each player tries to second-guess the the other’s actions.

Single-player is a welcome addition as it can be quite daunting for a new player to head straight into the multi-player against more experienced foes. If your curiosity is piqued you can find out more at http://www.frozensynapse.com where you can also pre-order and get access to the beta.

Here are a couple of new screenshots that show off the single-player: