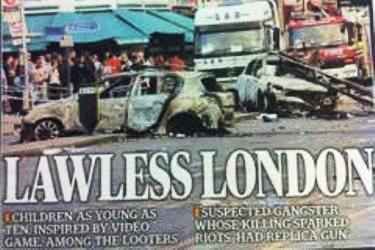 The following article is intended to be a satirical look at newspaper coverage that quickly leaps to find a scapegoat for any social ill, with gaming near the top of their list. The events taking place in London are deeply shocking to us here at the Reticule and we hope all those affected are safe and well. Please take this article as intended.

As Monday evening’s London Evening Standard shows, games are evil. By simply playing one, we are allowing our ideals and moral fibre to be warped by the wicked companies responsible for making them. Games are directly responsible for the acts of every idiot/madman/rioter across the world. After playing games since the age of around 7 or 8, the crimes I have committed as a result of my (100% scientifically proven) games addiction are numerous and as yet un-catalogued. Now, for the first time I will reveal to you my secret shame – a full unabridged confession of criminal acts performed by me, inspired by gaming. Perhaps my story will help other gamers come to terms with the atrocities they themselves have committed in the name of ‘entertainment’.

At first glance, you might think think this was an innocent family game, but you’d be mistaken. For at least 13 minutes after playing Bubble Bobble on a family friends Spectrum at the delicate age of 8, I would find myself blowing spit bubbles and launching them at anything and everything that looked like it might help me on my way to a high-score. This practice might seem a little disgusting, but hardly criminal to you, but I had murder in mind. Gleeful images of people suffocating within my spitastic globules played out in my imagination constantly after a quick session with Bub and Bob. My murderous intent was only stifled by my undeveloped saliva glands – my bubbles were seldom strong enough to survive more than a few seconds after being created, let alone contact with solid objects or people. Still, where others might see those bubble blower things as simple childhood relics of a bygone era, I see a WEAPON.

To the untrained eye Bomberman is a harmless combination of power-ups and explodey hi-jinks, as players complete to blow each other up with little cartoon bombs. But don’t let looks deceive. Bomberman is actually a Terrorist Training Simulator, teaching children how to murder innocents and commit atrocities, yet still escape with their lives. After first playing Bomberman, I would often scamper around my house, leaving behind my childish minds best approximation of bombs to surprise and disturb relatives. The closest I ever managed was leaving a balloon upon the floor, with a candle suspended from the ceiling by a piece of string, dangling over the balloon, hot wax drip dripping until the inevitable Bang! Still at this point, no fatalities were recorded, but it did cause one of my cats to shit itself.

Half-life, it is often claimed, changed everything. But while some ‘game journalists’ (one-step removed from Holocaust deniers in reality) will tell you about how it showed a powerful narrative unfolding from a 1st person perspective, the truth of its influence tells a darker story. Ever since I first stepped into the ‘free-man’s’ shoes, I have found my mind impregnated with sickening Anarchist propaganda. I am now unable to leave the house without my trusty crowbar and if I see any kind of brown crate on my travels – so help me God I will smash the everloving crap out of it.

Dragon Age
Synopsis – Save the dog-friendly realm of Fereldon from the grumpy-looking Darkspawn.

Dragon Age literally forced me to turn gay, by having completely optional same-sex romances. Although being gay isn’t a crime, it was until 1967 here in the UK. I think we can all agree, those were better days, when people with different sexual orientation were forced to pretend to be like everyone else or face persecution, social stigma and prosecution.

The Sims
Synopsis – Create characters to inhabit a virtual neighbourhood and speak gibberish to one another.

The Sims is essentially the video game version of the Saw and Hostel movies, cunningly disguised as a fun and friendly soap-opera simulator. But scratch away at the surface and its true purpose becomes apparent – your goal as an omnipotent watchman is to inflict emotional torment and psychological torture upon the families inhabiting your game world. After playing the Sims, I would often attempt to remove the doors from windowless rooms, then quickly replace them with concrete walls, while occupied. Unfortunately the process is a little bit slower in real-life and most of the occupants would simply look at me strangely and step over the tiny walls I’d managed to build.

Minesweeper
Synopsis – Workplace timewaster in which you predict the position of mines using flags.

I at first thought Minesweeper was completely harmless, it was simply a casual way of passing the time, by playing an elaborate guessing game. But after an extended 38 hour non-stop session with it, the truth became apparent – subliminal messages are hidden in the game. This first came to my attention when I found myself unwittingly passing out several red flags to passers-by and shouting “One!” “Two!” “Three!” or “Four!” at them, before demanding they placed the flags on the floor around them. If they guessed incorrectly where I had secretly decided the mines were, I would run over to them and clap my hands really loudly next to their ears, while simultaneously shouting “Boom!” At least three people were mildly annoyed by my antics on these occasions.

So there you have it, concrete proof if it were needed that games are capable of turning even the most placid, passive people into villainous scumbags. I’m off to loot a jewellery store now, after an extended session with Popcap’s Bejewelled Blitz.

One thought on “Games made me do it”