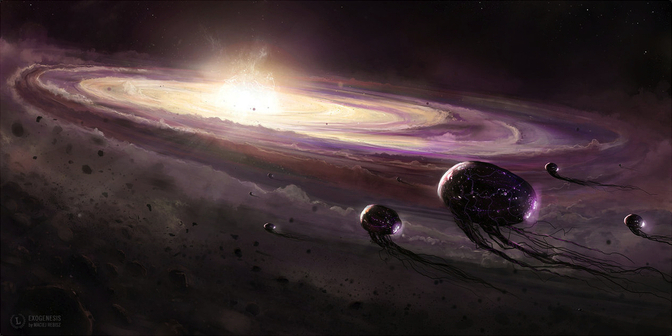 Crowds. After millennia of being present at historical events, they’ve taken to funding games instead. This week, crowds are funding: Space Pioneer, an ambitious cosmic RTS that isn’t really showing any gameplay; To the Death, a luxurious looking sidescrolling shoot-and-beat-em-up; Savage: The Shard of Gosen, a 16-bit oiled chest simulator; and, ReVen a game that fulfils this week’s compulsory intake of Metroidvania.

What is it with expansive space simulations making Kickstarter pitches showing beautiful pieces of concept art, talking up a laundry list of features and not showing the actual game? Oh, it makes selecting the round-up’s featured image easy enough, but if you want to help Space Pioneer to its $150,000 goal, you’ll have to take a pretty big leap of faith.

Sure, it sounds interesting – basically, Civilization mashed up with Homeworld, (or “Total War in Spaaaaccee”) and real-life cosmonauts are involved in development… but even the degree of their involvement, a key element of the pitch, is entirely unquantified… To the Death is a side-scrolling combo shumup/beat-em up (bemup?) about two gothic warlords running towards each other for a final, epic showdown. This concept particularly pays off in a split-screen two-player mode where you race towards your opponent and can make tactical decisions about how to upgrade your warrior to counter their build.

Thanks to the artistic talents of former Sony Santa Monica artist Cecil Kim, the environment and character art looks great, and in gameplay terms it sounds particularly varied. Nevertheless, it’s easy to look at the $400,000 goal and wonder how it all costs that much. The pitch has a good go at defending that figure (basically, they’re developing a full overworld map with mini-games and a heap of other content) – ahame that the explanation is sort of tucked away in the FAQ. “Where’s the money going?” is one of the biggest questions your pitch has to answer, and it’s one that potential backers won’t stick around very long to have answered.

Savage: The Shard of Gosen As an occasional collector of 8-bit games, the number of Conan the Barbarian-inspired titles (Rastan, Golden Axe and Barbarian, to name a few), is one of the more apparent differences between gaming then and now. Crowdfunding is (apparently) there to scratch all nostalgia itches though, and Savage: The Shard of Gosen returns to the genre while mostly keeping to late 80s, early 90s graphical conventions.

Another entry in the action-platformer genre, then, but its choice of Zelda II: The Adventure of Link as a source of gameplay inspiration (including a slick, mode-7 style overworld with roaming enemies) gives the game a distinct angle.

Kickstarter is never short of ‘Metroidvania’ games for you to fund – we’ve covered a few in recent weeks. You’d be forgiven for assuming that supply will outstrip demand sooner rather than later, but for now, a project with as modest a funding goal as Varia Games’ ReVen isn’t really in trouble.

Besides, even among a crowded marketplace, ReVen has some reasonably tight looking gameplay to show off and plenty of great-looking beasties to gloop. The developers are promising to add “RPG elements that can be found in Crysis and Deus Ex” too.

Wait, there were RPG elements in Crysis?