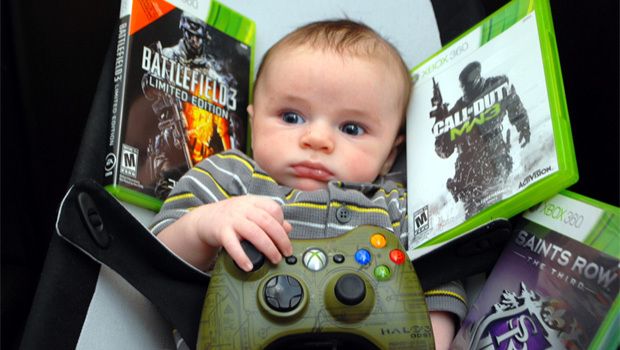 I, rather daftly, have just had another child. Well I say ‘I’ did; my wife did all the hard work, but you get what I mean. This has had a serious impact on my gaming (and writing), as anyone with children can imagine. It has though, also lead to some revelations……

When you become a parent many things change. The main one (after boring things like responsibility, love, lack of sleep and steady erosion of your sanity) is the reduction in your free time. This is especially pertinent if you’re a gamer; children, adorable little mites that they are, soak-up free time like little mobile black holes.

This has knock-on effects. As free time shrinks, so does the amount of time you have to do the other, general stuff that keeps your house, lives and relationships going. Everything is condensed and you find yourself having to do more, in less time. Leisure time, specifically game-time in this instance, becomes exceptionally rare and therefore far more precious. It is a silent refuge that always seems to be, just, out of reach.

Any game time you do get then has to be taken with both hands and enjoyed to the fullest, and this, incidentally, is when you start to notice things you hadn’t before about games. Some of which become incredibly important. Recently, a few have stuck out for me:

The less time you spend staring at a menu or loading screen the better. Seriously. There’s very little excuse given today’s tech for excessively long loading times and being a parent, I class anything over 5 seconds as excessively long. It’s also a compound thing- you want time from click to game to be as short as possible. Minecraft used to be my go-to game for a quick blast. You could be in the game, running away from Creepers in under ten seconds from clicking the icon. The (not so recent) server updates and launcher implementation has increased this to a minute or so. Too long when you have the omnipresent wailing of a young child to contend with.

XCOM, my perennial favorite can get me into the game, past the loading screen and actually playing in under a minute- that’s what we like. I know I can boot it up and i’ll be away. Though, this does presuppose that Steam is behaving….Conversely, Elite:Dangerous, my ‘wife and kids are out’ game takes around 3-4 minutes to boot up. Too long.

Seriously. If a game isn’t pausable, at any moment, even mid cut-scene, then it’s no use. Little Timmy (neither of my son’s are called Timmy) will always chose the most inopportune time to be sick/scared/thirsty. It astounds me that not all games have this (especially in cutscenes).

In a similar vein to pausing I guess, I need small, bite-sized snippets of gaming. If a mission or quest is too long I will lose any sense of narrative or continuity in the little portions that I can actually get to play it. Hour-long MMO dungeon-crawls are right out of the window. As too are any cooperative games that involve too much time.Small, action packed missions with an overarching sense of progression are ideal (cough-XCOM-cough). Online, Counter-Strike and, dare I say it, Call of Duty are ideal for quick blasts. Ok, I get that you want to push your game on your own platform. It’s your way of throwing everything else you own at me in a desperate hope that I will buy it. What I don’t like though is if that launcher takes ages to load or is difficult to navigate. Further, I HATE it when the launcher itself needs updating (such as Elite:Dangerous’ did recently, inadvertently corrupting my, and many others’ game in the process…). The launcher is just your way in, why the Dickin’s would it need updating? Did you lack THAT much foresight?

Golden rule for launchers and third party bloatware- be better than Steam. I know a lot of people hate Steam, but it just works. If you can’t be as good as, or better than it, then you’re just getting in the way and annoying customers. Especially customers with kids. Ubisoft I’m looking at you.

This then, is the real killer. The two words that strike fear into any parent-gamer are ‘update needed’. For gods sake make the updates optional, and don’t lock the game off from playing until the update is ran; many a time I’ve gone to sit down for a twenty minute session only to have it mercilessly robbed by an update. I HATE updates. So what do I currently play? Well, in the unlikely event that I actually get enough time to power my desktop-up, it’s usually XCOM (surprise surprise) or recently, a lot of Counter-Strike. Both offer good gameplay in manageable chunks. XCOM’s turn based nature means you’re basically always paused and can walk away at the drop of a hat (or nappy). Counter-Strike’s short rounds mean you can cram a lot of quality gaming (start, middle, end of a mission/round) into a short space of time- giving you that ‘hit’ that you need.

It may not be ideal, but it does the job.

What are your favourite ‘quick hit’ games? Drop them in the comments below.