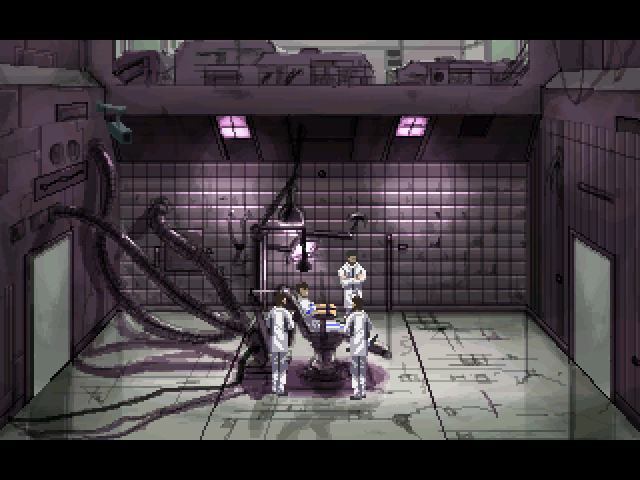 If there was one genre that truly defined my childhood, it was that of the point and click adventure. Raised on a diet of Sierra and Lucasarts, I’ve always had an overwhelming desire to audibly describe anything I’m looking at, and I remain forever confident that there are no problems in life that can’t be solved by combining two objects from my pocket.

Tragically, over recent years, the adventure game genre has dwindled from the behemoth it once was to a spattering of overly simplistic titles. Publisher Wadjet Eye Games, however, have taken upon themselves the responsibility for keeping the spirit of the 1990’s adventure game alive. Eschewing such modern ideals as 3D and high definition, their recent successes with the Blackwell series have proven an audience still exists for more cerebral games, where combat and action play second-fiddle to engaging characterisation and plot. Taking its cues from the Blade Runner school of science fiction, Gemini Rue takes a gleaming image of the future, then covers it in a fine layer of grease and grit. Late in the 23rd century we find two characters both searching for answers. Azriel Odin finds himself on the planet Barracus, digging through garbage for clues in a filthy rain soaked city run by criminals. Delta Six on the other hand is trapped in an Orwellian nightmare, a bright, clinical facility observed at all times by unseen eyes. The contrast between the two locations is both evocative and gripping, and their inevitable collision does much to drive the story forward.

Graphically, Gemini Rue is rooted firmly back in the 90s, with a fixed resolution and limited colour palette. It would be easy for gamers used to the graphical gluttony of Crysis and Skyrim to dismiss it as looking too dated, but to do that would be to miss the entire point. The artistic style is a deliberate homage to the glory days, when adventure games still enthralled. That’s not to say Gemini Rue lacks in innovation. Concessions to modern technology include an impressive particle system providing the rain, which would have proven impossible in the early Lucasarts years.

A main criticism hurled in the direction of adventure games is that so often their puzzles feel artificial and tacked on. Gemini Rue’s creator, Joshua Nuernberger, has done a spectacular job integrating the puzzles into the storyline in an organic manner, without resorting to the cheap tricks of combining items and hunting for errant pixels. The puzzles flow naturally from the story, rather than standing alongside it. As a result, some of the tasks may seem somewhat mundane and simplistic, but given the problems inherent in balancing adventure game difficulty, the game seems quite happy to indulge itself as more an interactive story than a mind-boggling puzzler. From time to time, the gentle plod through the story is broken up with an arcade shooting segment. It is here that Gemini Rue is at its weakest, with a cumbersome control system and distracting interface that makes gun-fights more tedious than tense. Taking cover and returning fire is purely a lesson in timing, where failure means nothing more than losing a few moments progress. It is a pity that these combat sections do not include solutions more in keeping with the adventure game mechanics than simply ‘use gun on bad-guy’, but Fate of Atlantis demonstrated years ago that combat could have its place in adventure games.

Whilst the conclusion of Gemini Rue may seem somewhat predictable, with the inevitable twist hinted at just slightly too often in the build-up to take anyone by surprise, it is not the destination that ultimately matters. Reaching the closing credits in any adventure game is the culmination of a journey, and the journey of Gemini Rue is both a fascinating and emotional one. For those older gamers who still fondly recall titles like Full Throttle, and those who consider Fate of Atlantis to be the real fourth Indiana Jones movie, Gemini Rue will come as a breath of fresh air. It succeeds in reviving the spirit of the lost era of Lucasarts, where puzzle and plot interweave tightly to provide a experience that will stay with you far longer than any throw-away shooter.

For more details on our review system, please read this post.