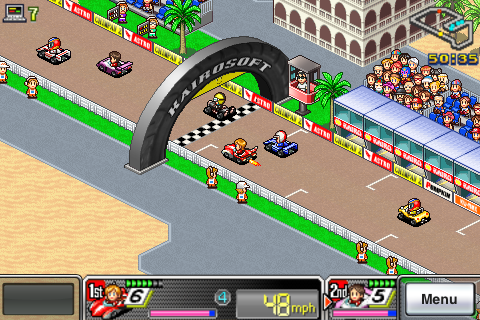 It is scary how much time you can spend on a game like Grand Prix Story without noticing. I was playing it the other night, and rather then lose an hour to reading Game of Thrones, I lost an hour to playing Grand Prix Story. It really is so easy to spend so much time playing this little gem.

This is another release from Kairosoft that follows a similar principle to the awesome Game Dev Story and the recently reviewed Hot Springs Story where you try to build up your business to earn as much money as you can and, in the case of Grand Prix Story, win as many races as possible.

The simply charm of watching your team of drivers and mechanics work on building your cars or researching improvements to your massive V10 Engine are a joy to watch, that is not to mention the race where you will be willing you little motor on to clinch the win. The tracks have a character of their own, races can take place on tarmac, dirt or ice and each location either has a track following a layout similar to the real Formula 1 tracks, or defining features like the Great Wall in China.

It is a simple and addictive game, you will find yourself eagerly waiting for the next race to bring in some more research data so you can level up your mechanics you research new parts for you car. There is nothing complicated about it, but that is what makes it so charming. You will struggle to resist its’ charms once you start to play, I know I did.