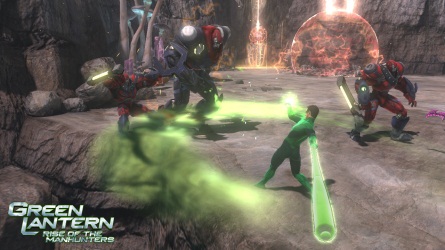 It is never wise to judge a book by its cover is the saying, that doesn’t really apply to Green Lantern, it is most certainly green as the new images after the jump attest. Green Lantern: Rise of the Manhunters has a mixed lineage which makes it hard to judge how good the game may be. Using conventional gaming logic, being based on a comic book means there is an above average chance that it will be a pretty decent release. On the other hand though, with it tying in with the upcoming movie there suddenly arises a fear that it will fall down the usual path of most movie tie-ins and be slightly crap. In these lovely new images you can see that your character, human pilot and Green Lantern, Hal Jordan, is able to use the Power Ring to create giant green swords which will aid you in your battle against the devious and more important, evil, androids that are trying to destroy the Green Lantern Corps. The game is out June 10th on PS3, 360, Wii and DS. I fully expect it to come in an illuminescent green box.