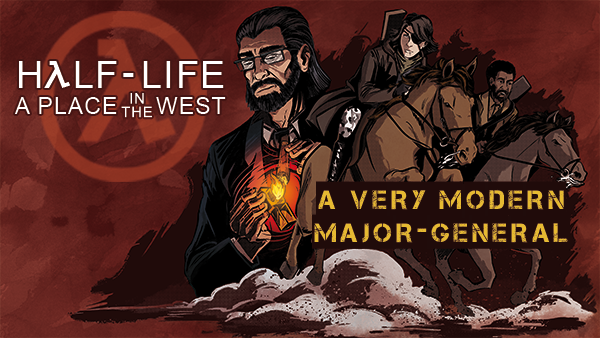 Last September, a comic known as A Place in the West appeared on Steam. An unofficial bridge between the events of Black Mesa and City 17, the story started to explore what would have happened to the those living through the Combine takeover. Now, after Valve granted the team use of the official Half-Life IP, Chapter #2 is now available on Steam as a £1.59 slice of DLC. A very good price for a 50-page comic I must say. Hit the break for more details of what writers Mike Pelletier and Ross Joseph Gardner have been up to.

In a lengthy blog detailing their recent escapades, Mike explains that Chapter #2 was initially planned for release in February (I’d even had the pleasure of a sneak peak of the new issue), but at the 11th hour, Valve surprised the team by offering them use of the official Half-Life IP. With production for the new chapter rising to $25,000, all coming out of Mike and Ross’ own savings, this has offered the duo a chance to recoup some of their costs and keep working on the story they are telling.

Mike and Ross have also learned plenty from Chapter #1 and their work on this new chapter. Their main takeaway has been that by sticking to their original plan of releasing six chapters, they would have been releasing one chapter a year, with the prospective Chapter #3 running at 80-pages. An ungodly number, and not one conducive to a healthy work balance for their team of artists. Their new plan calls for a balanced number of chapters that will better suit the pacing of the story. This means future chapters will run about 25-30 pages, with roughly three chapters being released a year. The plan now is that we will see Chapters #3 and #4 later this year, and Chapter #5 in Q2 of 2018.

Mike’s blog goes into further details of the behind the scenes work on the overall comic, as well as the next stage of translations they are working on, thanks to help from the community.

I’ve had the privilege of reading Chapter #2 already, and I am pleased to say that it is a very good tale by itself, and does a great job of building on the foundations laid out in Chapter #1. If you’re not sure about diving in, you can still read the first chapter for free and also get access to the first five pages of the new chapter for free. Well worth checking out, no?