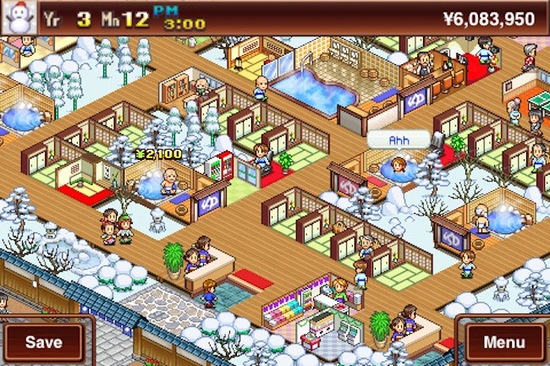 There is something curiously addictive about success. An addictiveness that Kairosoft simultaneously enjoys as a company and provides in their games. Hot Springs Story is the sequel to Game Dev Story – the critically acclaimed management sim that won the hearts and minds of casual and hardcore gamers alike back in 2010.  The premise of this installment? Build the best hot spring spa money can buy. The gameplay is beautifully simplistic, the player constructs and expands their spa to boost income and improve the quality of the spa’s facilities.

There is no denying the charm the graphics bring to the title – the tiny, pixel eyed sprites bustle around the world like tiny little insects. I often found myself captivated by the tiny salarymen, housewives and even fortunetellers as they scuttled about the labyrinth like spa I had constructed for them.

Hidden beneath this simplistic cutesy veneer however, lies that a wealth of statistics that are bound to interest even the most hardcore strategy fans. There are a whole host of target demographics that you can engineer your spa to appeal to – the trick is to pick three that will complement each other in order to maximise your spa’s profit. On top of this, the player is encouraged to invest in the local economy in order to increase the amount of disposable income that potential customers will have. Specialists from each demographic can also be invited to stay at your spa to review the facilities and will give feedback on their stay, if they have had a positive experience new features for your spa will be unlocked.

Reputation is the key to success in Hot Springs and if the player can keep customers happy then the game makes sure you are rewarded. A steadily increasing bank balance encourages you to keep building and expanding, and the prize money from magazine rankings means that you’ve always got just enough for that new type of shop or pool you had your eye on. It could be argued that the game is too easy – on the odd occasion that I fell into the red I always found I was rapidly reimbursed with no penalty – but the sheer quality of the title, coupled with its relentless charm means the forgiving difficulty is easy to overlook.

Overall, the distinct Japanese quirkiness, colourful graphics and easy-to-use gameplay style make Hot Springs Story and essential addition to anyone’s app selection, though the hidden depth means it would also be ideal for any strategy fiend looking for something new – and with 60% off for Pocket Academy‘s launch, there has never been a better time to get your spa on.

One thought on “Hot Springs Story – The Verdict”