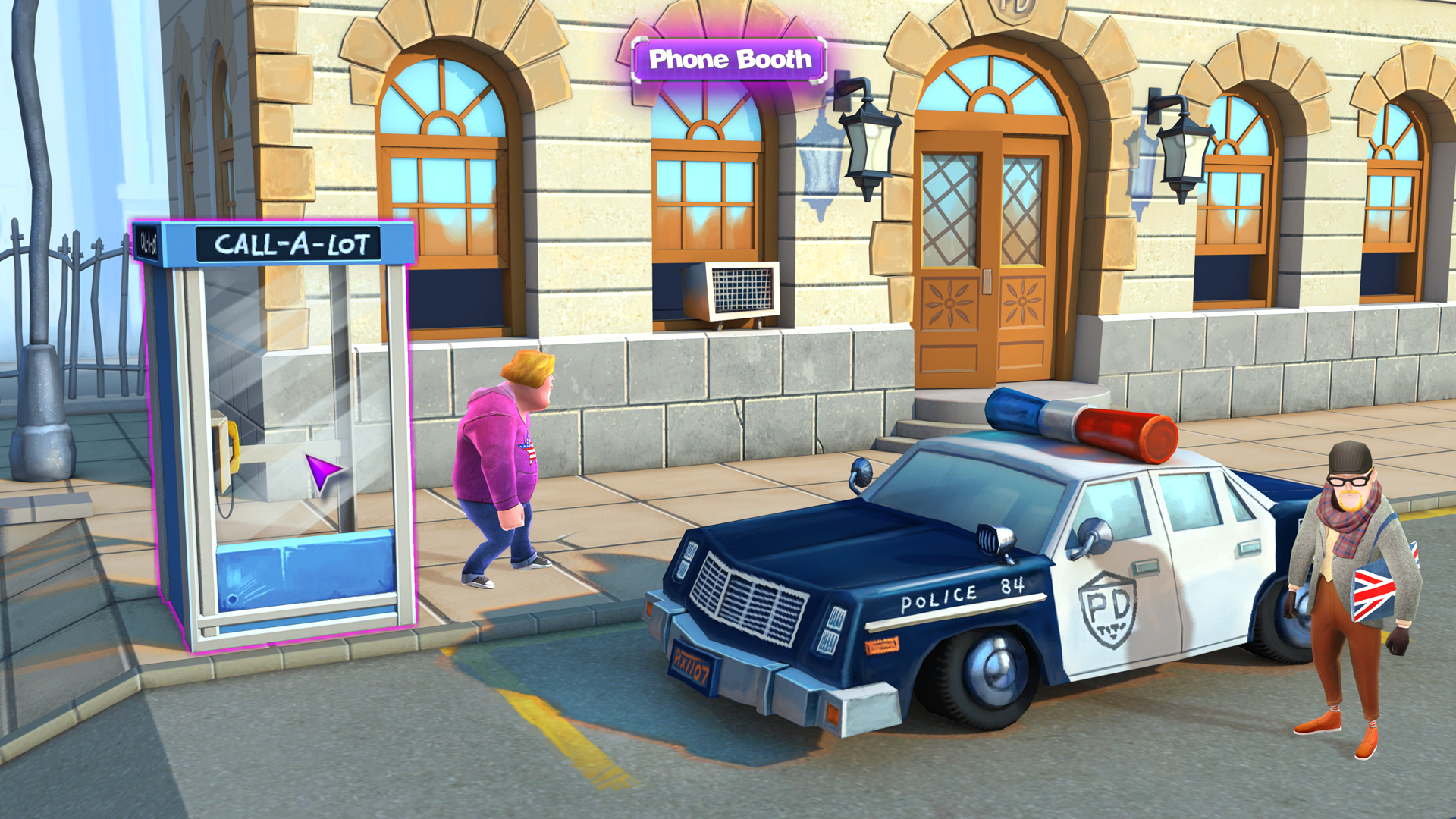 Creating satire always involves walking the fine line between being funny and just being annoying, whilst not being pointlessly offensive. Supreme League of Patriots, an upcoming episodic point and click adventure from indie studio No Bull Intentions, might be able to manage that responsibility and walk the line. Might.

Supreme League of Patriots gets quite a lot right, and what it gets right could be essential for the future success. Whilst the point-and-click mechanics at the core of the game aren’t revolutionary, the world No Bull Intentions have provided is quite lovely. Although the locations in the preview more or less consisted of offices, a dingy apartment and more offices, the colourful, almost painterly, art style kept the environments safely clear of being drab and boring. Given that this first episode is billed as a scene-setter, the art style could winner defining feature if future episodes explore some more varied and outlandish environments. Even when they’re primarily backdrop, the interactive and purely decorative parts of the environments blend together well and are more than easy on the eye. The character design is, for the most part, similarly well put together, with an appropriately exaggerated and colourful cast of caricatures, thought some work better than others. The former KGB assassin/Rocky IV stunt double superhero stands out as a particular highlight. There are a couple of misses too, while the introduction of new characters can fall flat at times. It will be interesting to see what No Bull Intentions do with the cast of characters that they’ve assembled.

The mechanical details of the point-and-click system are promising, there is a pleasingly minimalistic UI and menu system that doesn’t overly clutter the screen. The team seem to be trying to keep everything focused on the narrative and characters, rather than on arbitrary systems as filler, which can only be a good thing. They certainly seem to think so, because the lack of filler is referenced more than a few times.

That No Bull Intentions are leaving plenty of space for characters to develop is also apparent in the effort they’ve put into fully voicing the game. Every character is voiced, and most of them have fairly lengthy dialogue trees. There are certainly some stand outs, and it does some a fair way towards making the story as colourful as the art style. However, the dialogue does, on occasion, come across as being just a little bit stilted. In particular, conversations with the stereotypically cynical and British sidekick sometimes end up sounding more like discreet blocks of speech, rather than actual conversations. Still, this improved as I progressed through the preview build, and if No Bull Intentions make the speech just a little bit more fluid then the voice acting could be a real draw. The puzzles are, for the most part, intuitive and tend to avoid the torturous logic of traditional point and clicks, whilst managing to avoid being overly simple. There’s good sense of progression in complexity, with only a couple of moments of annoying frustration. When I did get stuck, the sidekick with his handy built in hint-system was there to help, so I never felt entirely without a clue as to what to do.
With attractive art-work, well-designed mechanics and a fully voiced adventure Supreme League of Patriots has all the mod-cons of a modern adventure game, which makes it promising in and of itself.

The problem is that Supreme League of Patriots doesn’t quite work. No Bull Intentions have billed it as an acerbic romp through American culture, accompanied by the superhero lovechild of Sarah Palin and Rambo. However, the preview didn’t match this description until around a quarter-hour from the end. Everything up until that point was essentially set-up, and it was set-up that didn’t really tickle my humour gland. Not that I’ve got any problems with set-up; Supreme League of Patriots is a tale of superheroes, and all superheroes need their origin stories. My problem is that the set-up lacks the satirical bite that it so desperately needs. Until it gets that bite, the jokes will always feel just a little bit bland. The usual pop-culture jokes did the rounds, with some slightly cheap jabs at Simon Cowell and the rest of the talent show brigade and some well-aired videogame references. Genre clichés also come under fire, with nudges towards adventure game logic and convoluted puzzle chains, but I never really felt more than amused. It desperately needs some teeth, and more bite than most of the preview build had on offer, and it needs to do more than make cheap shots to actually work as a satire. That said, by the end Supreme League of Patriots starts to realise more of the satirical bite of the set-up, so perhaps No Bull Intentions can pull out the stops. When it does work, as it did towards the end of the preview, it becomes more reminiscent of that distinctly British strain of brutal parody and it becomes genuinely funny.

You can find out more on Supreme League of Patriots on the official site or on Greenlight.